As NEFF’s conservation reach has grown over time through the acquisition of more Community Forests, so too has our ability to practice and demonstrate Exemplary Forestry on a variety of lands. As part of our 75th anniversary celebrations, we asked designers at Yellobee Studio to create a graphic that would show this progress. We’re thrilled with the final product. The following timeline was featured in our summer 2019 newsletter, but if you don’t receive Into the Woods, click the following graphic to view it at full size. 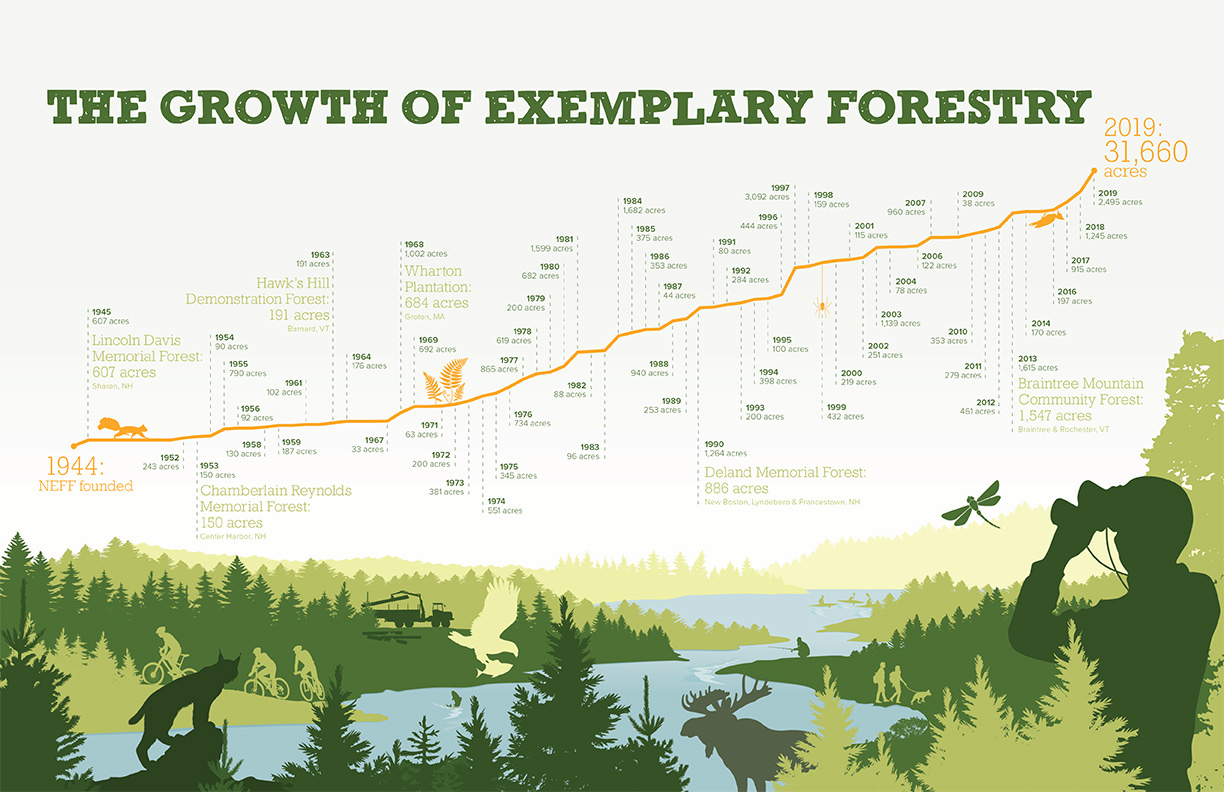 Learn About the Timeline’s Featured Forests

NEFF’s first forest is now known as the Lincoln Davis-Cabot-Morse Memorial Forest in recognition of later land donations. Dr. Lincoln Davis deeded the property’s first 607 acres to NEFF in 1945, Thomas Cabot and Virginia Wellington Cabot gave an adjoining 176 acres in 1964, and Clarissa Morse gave an additional 146 acres in 1985. This has been a busy forest for NEFF over the years thanks to regular harvests conducted to Exemplary Forestry standards, management activities that have improved wildlife habitat, and frequent trail use. The forest offers hikers a view of Mount Monadnock and a place to connect with the popular Wapack Trail.

Located in the Squam Lakes Region, this forest was donated to NEFF by John Wister and named for his two friends, Allen Chamberlain and Harris Reynolds. Chamberlain was a founder of the Massachusetts Forest and Parks Association and preceded Harris Reynolds—NEFF’s founder—as the organization’s Executive Secretary. The property’s nearly mile-long shoreline is a critical nesting area for loons, and provides dramatic views of the lake and mountains. NEFF has worked in partnership with the Squam Lakes Association (SLA) for decades at Chamberlain Reynolds; SLA maintains the forest’s hiking trails and manages its popular campsites. New England Forestry Consultants (NEFCo) has also played an important role at Chamberlain Reynolds, where NEFCo forester Peter Farrell has managed forestry activities on behalf of NEFF since 1994.

This forest got its own article in the summer 2019 Into the Woods, so read it now to learn the history and highlights of NEFF’s first Vermont forest.

NEFF incorporator William Wharton began purchasing the lands that now compose Wharton Plantation as early as 1905, and then donated the entire property to NEFF later in his life. These initial parcels were composed of abandoned farmland that Wharton replanted over the years. The forest now features an extensive trail system and offers views of beaver-created wetlands and Baddacook Pond.

Mrs. F. Stanton Deland donated 700 acres of well-managed white pine forest along the Piscataquog River to NEFF in memory of her husband. The property was one of the largest singly owned parcels to become part of the river valley’s protection plan, and its conservation impact has grown over time thanks to Mrs. Deland and the cooperative efforts of NEFF, the Society for the Protection of New Hampshire Forests (SPNHF), New Hampshire Audubon, and the Piscataquog River Watershed Association. In 1995, NEFF purchased two abutting parcels with major fundraising assistance from Mrs. Deland and this network of conservation organizations. SPNHF also holds a conservation easement on the forest—gifted to them by Mrs. Deland—and New Hampshire Audubon has built a nature trail through part of Deland Memorial Forest.

The Braintree Mountain Community Forest represents the largest donation of land to NEFF in the organization’s history. Paul Kendall and Sharon Rives of the Todhah Hill Foundation gifted the forest to NEFF after the couple spent decades assembling it from smaller parcels of adjacent lands. They undertook this personal land conservation project to protect the headwaters of the Riford Brook watershed from development and to ensure opportunities for outdoor recreation and sustainable forestry. The forest offers 360-degree mountain views, and has an excellent trail system for hiking, snowshoeing, and cross-country skiing.

Discover the Names of All NEFF’s Forests

The name, size and location of each NEFF Community Forest is listed in the PDF pictured below. Click here to view and download the document. 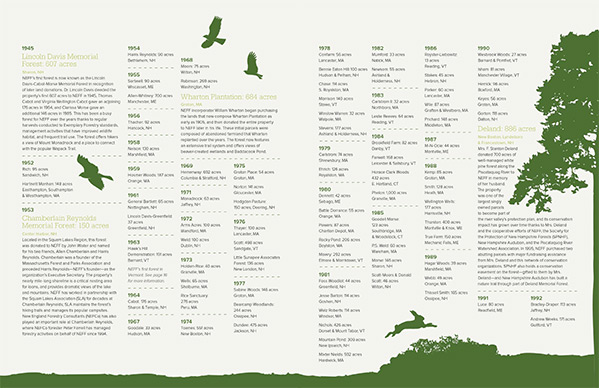 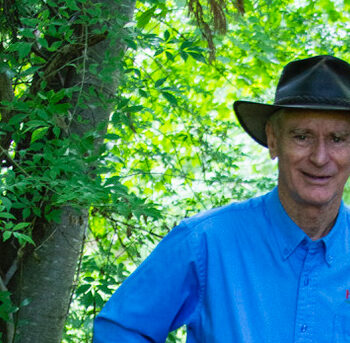