On a sunny afternoon this August in Keene, NH, a few NEFF staffers met up with Barbara Campbell to hear the stories behind her family’s forestland, located down the road in Hancock. Just a few months before, Barbara had passed ownership of the land to NEFF through a gift annuity—the final step in her long journey to protect well-loved woodlands, which she had first placed under NEFF conservation easements in 1994. As we spoke over tea and cookies, it became clear that the land’s best stories and the decisions that shaped it all come back to family. Barbara even requested that NEFF name the land the Richard Williams Memorial Forest in honor of her late husband.

Richard Williams assembled the family’s eventual 382-acre woodland from multiple parcels he purchased from 1963 to 1973. The end result was a quiet family retreat and working forest that featured rolling hills, a few steep rocky ledges, and winding streams.

At first, Barbara, Richard and their children used the New Hampshire woodland as a weekend getaway, but the parents in the family had been thinking about moving away from their home in Cambridge, MA, to give the kids a better environment in which to grow and learn—an environment like Barbara’s own childhood in the countryside. Barbara said she and Richard reached a turning point quite suddenly in the late 1960s: “We came up one weekend to spend time in the woods with the children, then simply took a look at each other and said, ‘let’s move here.’” 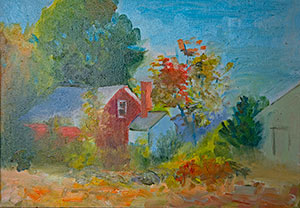 One of Barbara Campbell’s paintings of her home in Hancock

The transition initially proved challenging for all of them—in Barbara’s case, she missed her Cambridge-based friends and the perks of living in a city—but the kids had the hardest time of it. Barbara laughingly explained their first reaction to Hancock was, “There’s nothing here but cows.” After joining the local 4-H program and making some new friends, the kids began to feel at home.

Having lived in the country as a child, Barbara soon settled into her new life in Hancock and “loved being in the woods full-time.” She came to relish heading into the forest with her art supplies to paint whatever caught her eye, cooling off in the property’s largest brook on blisteringly hot summer days, and exploring the trails with friends and family.

“I would take guests who liked walking right out onto the property as soon as they arrived,” Barbara said. “I always enjoyed sharing this special place with others.”

In 1981, Richard turned his attention to coming up with a formal plan for the forestland. Richard’s extended family had long worked with New England Forestry Foundation, and so he hired Dennis McKenney, a NEFF resident forester who was based in nearby Antrim, to create the property’s management plan. Richard would also later hire NEFF foresters to carry out management on the land.

McKenney’s document makes clear that Richard believed in NEFF’s approach to forestry; in addition to mapping out future sustainable harvests and other management activities, the plan highlights ways to protect and improve wildlife habitat. For example, the plan prioritizes habitat for Snowshoe Hare in certain locations:

Change came to the family and their woodland when Richard passed away in 1994.

“Richard had made it clear he wanted the land to be protected, and so I started looking into conservation easements,” Barbara said. “By that point, I had gotten to know NEFF’s history and thought both the company and the people who worked there were great. I knew they were the right group to work with.”

Barbara and Richard’s conservation efforts began in 1992 when they donated 28 acres of their property to New Hampshire Fish and Game’s adjacent Eva’s Marsh Wildlife Management Area. With Richard’s wishes in mind, Barbara then donated two conservation easements to NEFF in December 1994 that protected 280 acres of their forest. The easements allowed Barbara to continue owning the land with NEFF serving as the family’s partner in conservation; Dennis McKenney also continued managing the forest and its sustainable timber harvests, the most recent of which took place in 2008. NEFF staff enjoyed annual visits with Barbara to inspect the easements and observe signs of wildlife like moose, bobcat, and nesting warblers.

Almost 25 years after placing easements on her land, Barbara decided it was time to sell her home in the country and move to a retirement facility. Caring for the family woodland was also coming to take more time and energy than she liked, but Barbara didn’t want to sell it to just anyone.

“I wanted the land to go to people I trust, which made NEFF the right option again,” Barbara said. “This was my family’s property, and NEFF is an organization that feels like family.”

Barbara ultimately transferred the land to NEFF in return for a charitable annuity that will pay her an annual income for 10 years. Barbara requested the annuity be based on only a portion of the land’s value, while leaving the rest of the value as a generous gift to NEFF. In spring 2019, NEFF took ownership of the 280 acres of land that had originally been placed under easement, plus 15 additional acres that Barbara also wanted to protect. The Richard Williams Memorial Forest is now open to the public—and everyone in the NEFF family.

Writing and photography by Tinsley Hunsdorfer. 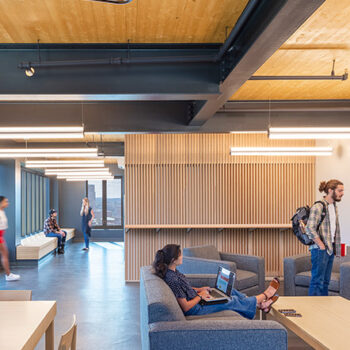