Writing and photography by Tinsley Hunsdorfer

When New England Forestry Foundation (NEFF) was founded in 1944, the practice of private organizations protecting land through ownership was largely untried in the United States. As we wrap up NEFF’s 75th anniversary year, it seems appropriate to take an in-depth look at NEFF’s first forest, the Lincoln Davis Memorial Forest of 1945, and then see how our conservation processes have changed over time by comparing it to a more recent cornerstone NEFF property, Hersey Mountain Forest.

While NEFF acquired these two beautiful, mountainous New Hampshire forestlands in different ways, they have both come to exemplify the outsize ecosystem impact protected land can have when it’s conserved collaboratively and with an eye to the wider landscape. Both NEFF properties are partially surrounded by a series of contiguous protected forestlands, with additional conserved land nearby.

Much of New England’s remaining private forestland—particularly in the southern portion of the region—has been carved into parcels that are too small to singlehandedly support the full suite of native wildlife. Roads and house lots that proliferate in this fragmented landscape can cut animals off from reproductive partners and force them into degraded habitat as they seek food and shelter. By strategically protecting contiguous land parcels that connect to important habitat, New Englanders can give wild animals safe passage to the resources they need to thrive—and, for species more prone to wandering, simply provide them with enough space.

“It’s been wonderful to look at the map of my area over time and see new green squares lining up like puzzle pieces,” said Camilla Lockwood, one of four landowners who have NEFF conservation easements on parcels around Lincoln Davis Memorial Forest. “There’s a lot of land around here, but that doesn’t do big critters any good if they can’t get from one place to another. They need large, unrestricted areas to roam, and I’m excited that my land is helping to fill in some gaps.”

Not only do contiguous pieces of well-managed forestland give wild animals stretches of uninterrupted habitat, but they also do a better job of protecting headwaters for clean water downstream. And more opportunities for long-distance hiking trails don’t hurt, either.

One such trail currently crosses Lincoln Davis Memorial Forest and its surrounding NEFF conservation easements in the Temple Mountain area of south-central New Hampshire; called the Wapack Trail, this popular hikers’ route opened in 1923 and runs north-south for 21 miles from Mount Watatic in Ashburnham, MA, to North Pack Monadnock in Greenfield, NH. 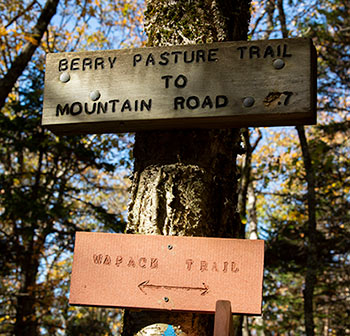 The Wapack Trail is maintained and preserved by the nonprofit, all-volunteer Friends of the Wapack organization. They also work with conservation organizations and government agencies to secure legal public access to all portions of the trail. Photo by Tinsley Hunsdorfer

NEFF first established a presence on Temple Mountain in 1945 when Dr. Lincoln Davis deeded a 607-acre parcel to NEFF that became the Lincoln Davis Memorial Forest. Dr. Davis was a surgeon at Massachusetts General Hospital, and in the 1920s and 1930s, often traveled to this well-loved woodland to enjoy time with his family and take a break from his busy professional life. His granddaughter, Emily Lewis, has stayed involved with NEFF and is a longtime donor.

Thomas Cabot and Virginia Wellington Cabot then gave NEFF an adjoining 176 acres in 1964 that include the crest of Temple Mountain. Tom Cabot was a dedicated conservationist who served as a member of the NEFF corporation and as president of the Appalachian Mountain Club, and who had a long-running attachment to Temple Mountain. He and his wife were outdoor enthusiasts who summered there for years, and a two-mile section of the Wapack Trail is now known as the Cabot Skyline in honor of his donation of a trail easement and to recognize him as “a lifelong friend of the Wapack Trail.”

“A great deal of marketable timber has been cut from the Lincoln Davis property on a sustainable basis and today the forest has more standing timber, in far better health, than on the day Dr. Davis deeded it to NEFF. A variety of forest management activities has improved habitat for many species of wildlife.”

The number of NEFF-protected acres on Temple Mountain began to grow once more in the late 1990s when some of the landowners near Lincoln Davis looked into ways to protect their forestland without selling it. After speaking with a NEFF land protection staff member about her options, Camilla Lockwood became the first neighbor to take the conservation easement plunge.

Signs of a Pileated Woodpecker along the Wapack Trail, photo by Tinsley Hunsdorfer

She decided to place easements on two parcels in 1998 and turned to NEFF as the best organization to hold them, and says she has since turned her attention to “managing my fields and forest to benefit wildlife and with a view to keeping some of the predations of climate change at bay.”

As she goes about transitioning fields to native habitat for pollinators and setting up new bat boxes, she says, “I think about how my land crosses the Wapack Trail and connects to other protected parcels on the other side of the mountain and of the many species that can now freely travel in adequate territory.”

The wildlife corridor formed by Camilla’s easements and the Lincoln Davis-Cabot-Morse Memorial Forest expanded in 2000 and 2001, when the Karl family, PJ and Tina O’Rourke, and the Cabot New Hampshire Land Trust each completed adjacent NEFF easements. This brought the total number of contiguous Temple Mountain acres protected by NEFF to 1,497, and the total length of Wapack Trail on NEFF-protected lands to well over a mile—not a bad legacy for NEFF’s first forest, and a collective conservation achievement to be proud of.

In 1994, just a year before work began on Hersey Mountain Forest, NEFF spun off its forestry services program to create the standalone New England Forestry Consultants corporation, and redirected NEFF’s resources toward forest conservation and outreach.

NEFF was then positioned to start proactively seeking out and purchasing properties for protection, rather than exclusively relying on donations from members of the public to expand its network of Community Forests. As always, donated land was—and still is—a welcome and celebrated component of NEFF’s conservation program, but NEFF’s expert land protection team could now move quickly to acquire high-priority forestlands.

The proposed Hersey Mountain Forest was an ambitious project for NEFF—to this day, it remains our largest Community Forest—but it was also an exciting and unique opportunity that was supported by a number of people and organizations working in close collaboration.

NEFF had recently purchased one large parcel—the Mike Burke Memorial Forest—that would eventually be folded in to the larger forest, and longtime NEFF supporters Julie and Bayard Henry planned to donate their sizeable Knox Mountain Tree Farm to drive the Hersey Mountain project forward. Funding from Sweet Water Trust helped secure the seven other parcels that ultimately filled in the rest of the forest.

Details about what made Hersey Mountain such a special conservation opportunity were not fully known until 2003, when Rick Van de Poll, Ph.D., conducted an ecological survey that found more than 20 natural communities and 42 vernal pools. The diverse habitats include 68 acres of old growth forest and 513 acres of Significant Ecological Areas, and support an incredible array of wildlife: 13 species of amphibians, five species of reptiles, five species of fish, 31 species of mammals, 105 species of birds, and 126 taxa of insects.

As of 2007 and 2012 respectively, and with additional assistance from Sweet Water Trust, Northeast Wilderness Trust holds a forever-wild easement on the 2,100 acres of Hersey that are home to this remarkable habitat and wildlife, and the Society for the Protection of New Hampshire Forests holds a conservation easement that allows for sustainable forestry on Hersey Mountain’s remaining 1,100 acres. NEFF retains ownership of the full 3,200 acres. Both forest reserves and forests managed to Exemplary Forestry standards have a part to play in addressing the climate crisis, and Hersey is showing how these two approaches can coexist and complement each other.

“It’s not common for one organization to work to protect land as forever wild and as working forest at the same time. NEFF responded to the unique biology of Hersey Mountain with a land protection effort that applied forever-wild protection to the portions of the landscape that needed it, while applying our core expertise in productive high-quality forestry on the remainder,” explains Frank Lowenstein, NEFF’s deputy director and chief conservation officer.

Like Lincoln Davis Memorial Forest, Hersey Mountain’s conservation impact is magnified by its proximity to other protected lands. It shares a border with the George Duncan State Forest, and is bracketed by two parcels with NEFF conservation easements—one granted from Julie and Bayard Henry to the south and another from John and Nancy Conkling to the northwest.

As NEFF embarks on its next 75 years, we will continue to build on this track record by pursuing ambitious new partnerships and projects that help stitch together forested landscapes—landscapes that give New England’s wildlife plenty of room to roam.

Our particular thanks to Walker Buckner of Sweet Water Trust and to Hersey Mountain’s dedicated NEFCo forester, Peter Farrell. NEFF staff and Board of Directors members would also like to recognize NEFCo forester Mike Burke; the Mike Burke Memorial Forest was named in his honor after he died abruptly from leukemia in 1995.

Conservation of NEFF’s first forest and surrounding lands over time 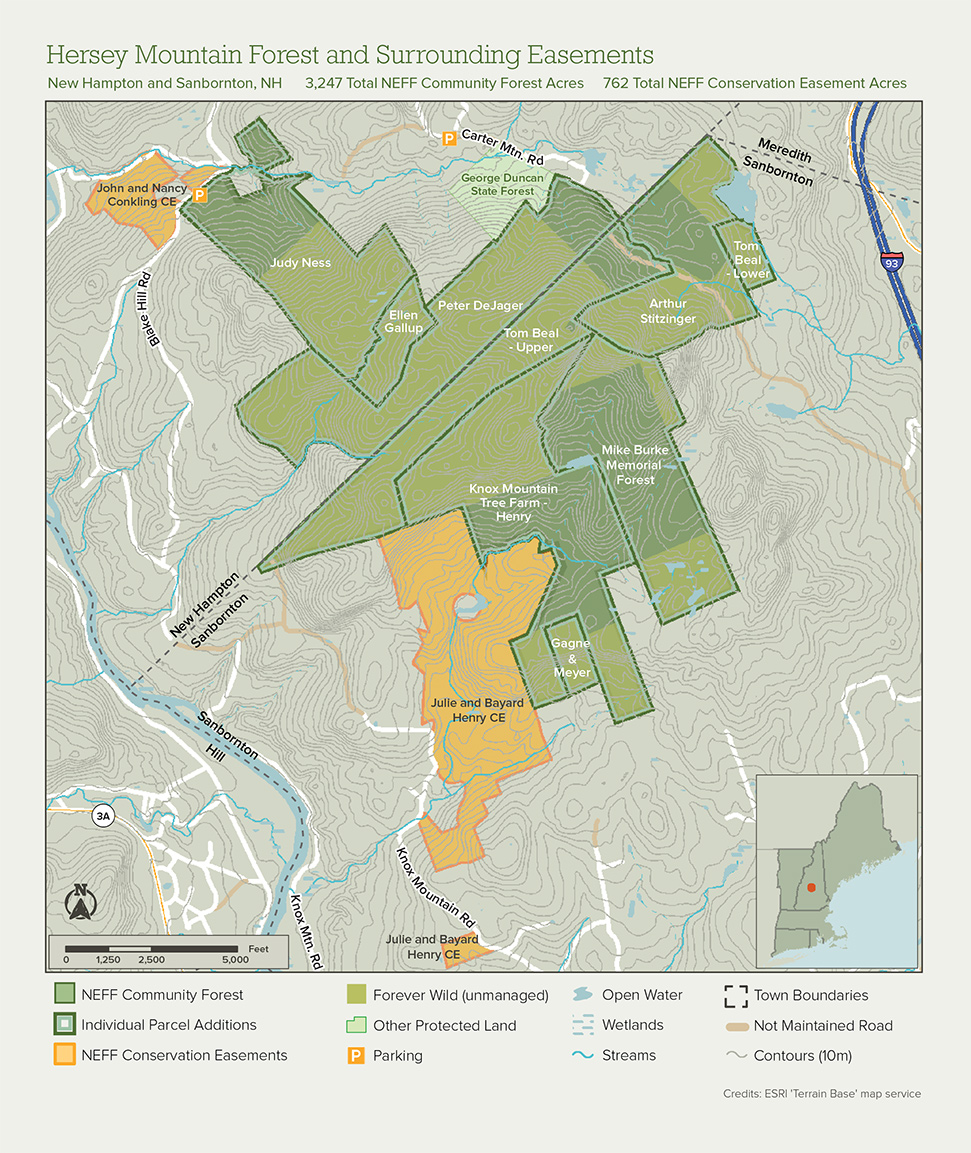 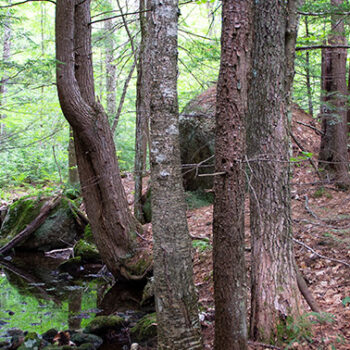 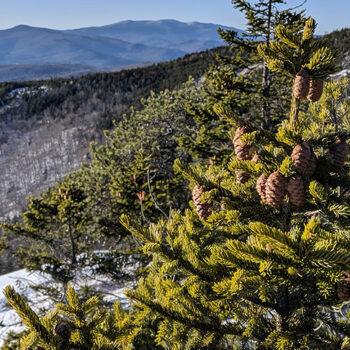