Notes From the Field: Early Signs of Spring

Notes From the Field: Early Signs of Spring

This is the second post in NEFF’s new blog series, Notes From the Field, which is designed to bring nature to you at a time when many people are sheltering at home. When it is safe to do so, staff members will offer a behind-the-scenes look at their current work and document interesting natural phenomena from forestlands protected by NEFF. We will also share retrospective stories.

As winter slowly progressed toward spring in late February and early March, NEFF’s forest stewardship team was poised to emerge from our administrative dens. The cold season had given us a chance to catch up on office work and efficient new software solutions, yet we yearned for outdoor fieldwork to begin in earnest! With a sudden, disconcerting turn of worldwide events, we like so many have been forced to trade our office camaraderie for virtual meetings from desks and kitchen tables at home. However, our lucky professional privilege of contributing to the sectors of sustainable forest products and protected land stewardship meant we could still kick things off with solo woodland visits to local NEFF properties within an hour of headquarters or home.

My first real sign of coming spring beyond abundant ticks came on during a sunny March visit to the edge of Taunton and Berkley, MA. NEFF protects 320 acres of private land here with nice pine-oak and fascinating Atlantic white cedar and tupelo forest stands through conservation restrictions (CRs). As I made my way through the forest, I heard a distant cacophony of “quacks”—ducks? No, too quiet and numerous. I followed the sound, gingerly skirting greenbriar thorns, to the edge of a vernal pool. A hundred miniature splashes and a sudden silence greeted me. In spite of my best efforts, my footfalls were too obvious and the chorusing Wood Frogs had scattered at a clumsy human’s approach! 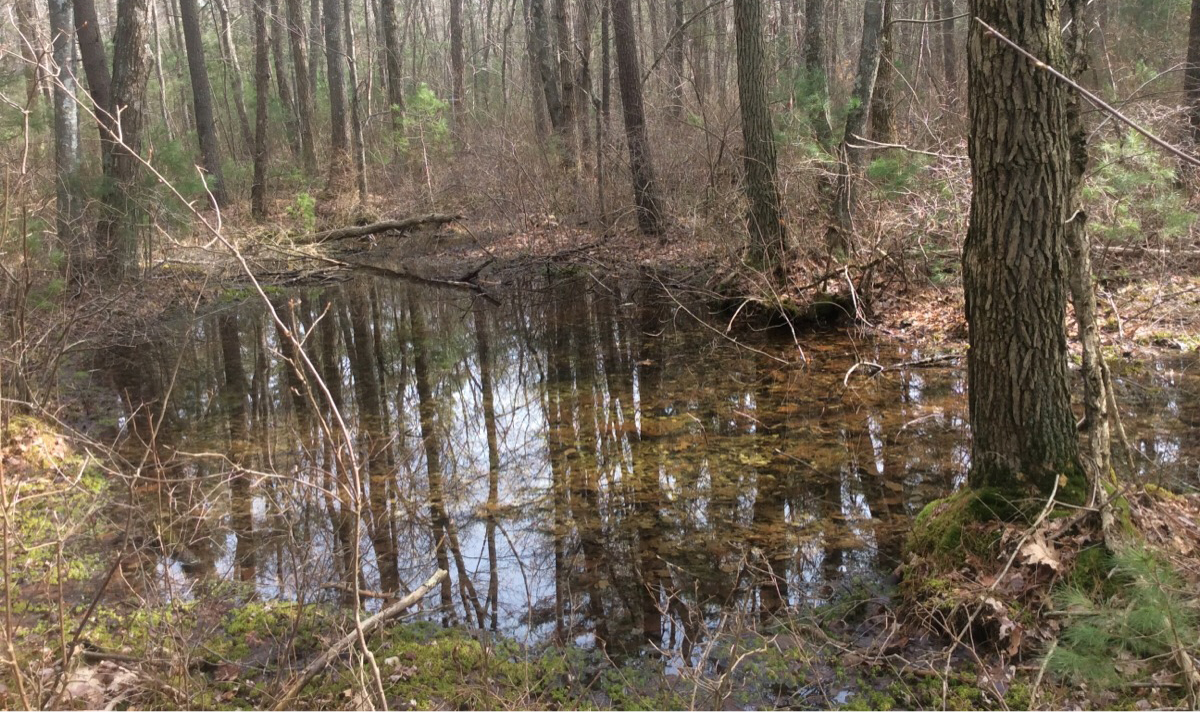 However, I was reassured to hear and see Wood Frogs returning to vernal pools around this property in both natural and old manmade depressions in the forest. Lacking outlets and free of hungry fish, these pools provide habitat for “obligate” species, so-called because they require seasonal vernal pools for successful breeding, such as Wood Frogs, Spotted Salamanders, and Fairy Shrimp.

Come late March and April, you will find wood frog egg masses like these in vernal pools around the region. This photo is from April 2019 on a CR property in central Massachusetts.

The next week I found myself in the Monadnock Region at the 295-acre Richard Williams Memorial Forest in Hancock, NH, a new NEFF Community Forest acquired just one year ago but protected by NEFF since 1994 through prior owner Barbara Campbell’s generous conservation easements (full story here). This quiet woodland is tucked away on rough Class VI public roads next to Eva’s Marsh, which is owned by the State of New Hampshire, and among thousands of acres of forest protected by local land trust the Harris Center for Conservation Education. 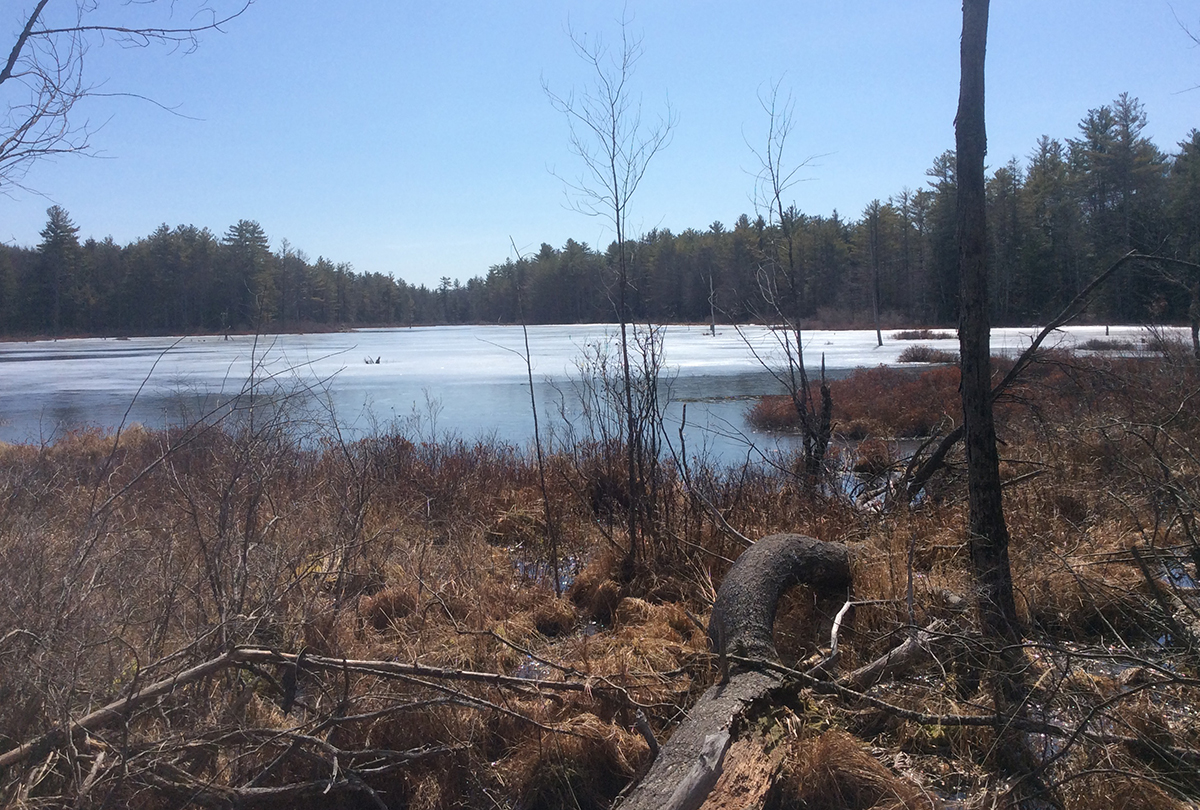 I did not see another human soul on the roads or in the woods on this cold morning, but widespread moose browse, some bear evidence, and the occasional chatter of resident birds like chickadees, a Brown Creeper, and White-breasted Nuthatches reminded me that we are never alone in our region’s lively forests even when they seem quiet. I enjoyed passing through a sugarbush on this property that has been tapped for many years under agreement with a neighbor. The sap flowed briskly through collector tubes on its way to a collection tank, boiler, and our eventual pancake breakfasts. As a dedicated New Englander, might I suggest a side dish of pickles with it!

As the COVID-19 news became more alarming in mid-March, I had stayed home for a couple weeks, but as March turned to April, I was ready to venture out on my next work adventure and hoped it would yield new signs of spring. I headed to Granville, MA, to inspect more CRs and map trails on Phelon Memorial Forest. At nearly 950 acres, this is NEFF’s largest Community Forest in Massachusetts, and the assemblage was recently expanded over the 1,000-acre mark by a generous 70-acre donation from the neighboring Clendenin family. No Wood Frogs yet in the pools at 1,400-foot elevations, no people on NEFF’s open trails, and still just a little too early for spring ephemeral wildflowers. 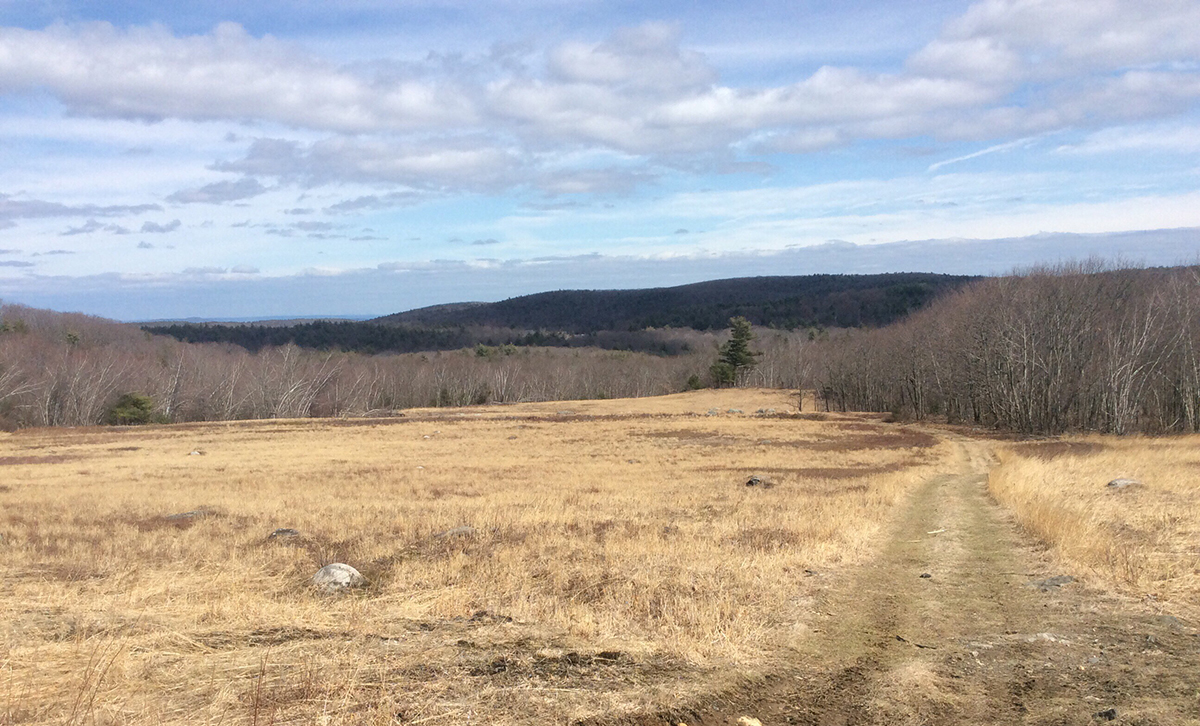 I enjoyed the views from the property’s hilltop blueberry barrens and vast open meadows still waiting to green up, saw an obligatory moose track, flushed a few Ruffed Grouse from a young forest stand along the way, and heard the amazing Winter Wren’s song (its namesake season refusing to entirely fade). But the highlight of the day was discovering a 20-foot waterfall teeming with spring snowmelt and recent rains deep in the hemlock forest along Valley Brook. Bring a snack and water if you go looking for it, because the loop in and out will be at least two miles with a long descent and ascent to and from the parking lot! 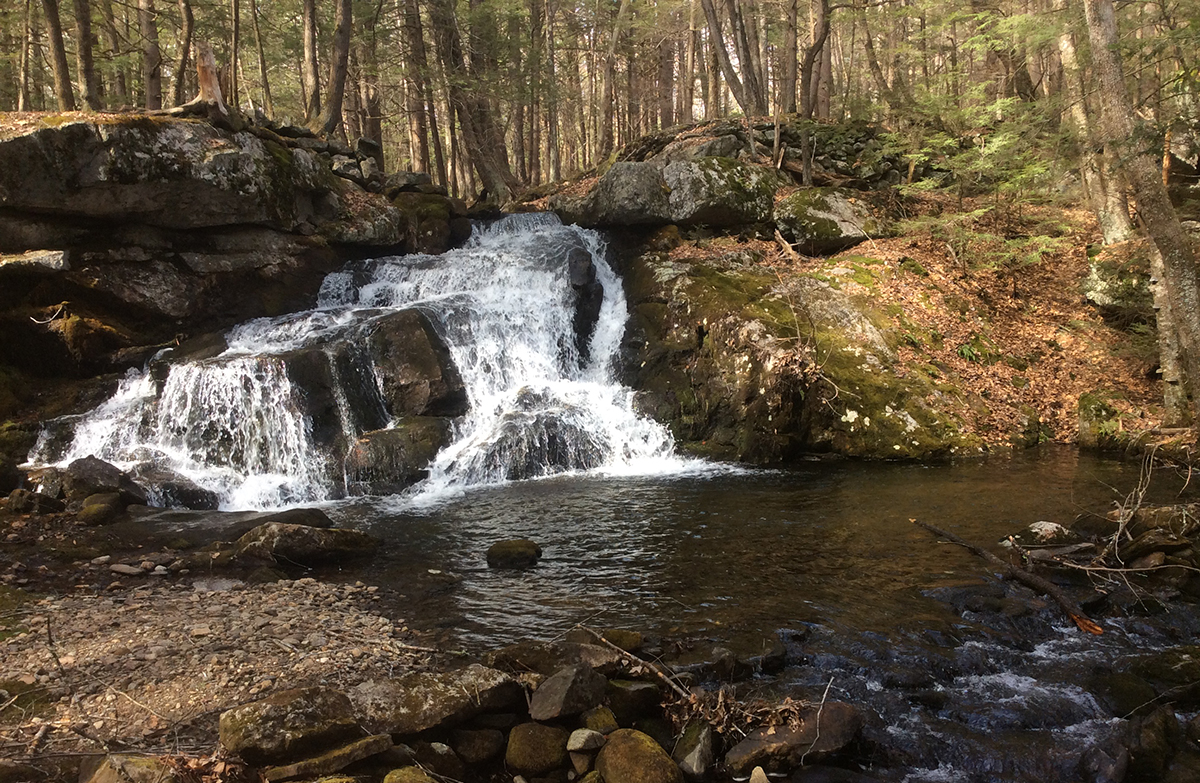 On this day, I visited a new NEFF CR in the Berkshires on yet another cold morning. My hope of finding spring ephemeral wildflowers in northern hardwood stands turned out to be in vain, but newly arrived migrant birds were my reminder that the season is trying hard to happen. Assertive and loud Red-winged Blackbirds had clearly re-established their turf in the marsh weeks ago, but now the trill of Pine Warblers echoed lazily from the treetops, a briefer trill evidenced a Palm Warbler by the wetland, and I heard two quiet but chaotic songs of Ruby-crowned Kinglets, the latter two just stopping through on their way north. Small flocks of White-throated Sparrows gave me suspicious looks from the shrub layer and a pair of Yellow-bellied Sapsuckers offered a good look through binoculars as they stopped to inspect a scarlet oak on a meadow’s edge. The highlight of this day would come later when I checked the memory card from our remote wildlife camera on this property. Among blurry videos of bears grumpily trying to dislodge the camera at 3 a.m. on a February night, partial views of energetic otter and beaver slinking by, and a bobcat in the camera’s night-time black and white mode, I found some great video footage of newly paired Northern Flickers!

The Northern Flicker is a common but strikingly colorful woodpecker species found across the continent that you can find on woodland edges from suburbs to the deeper forest. Some live in our region year-round while wiser ones migrate south for a spell. However, they are truly unique among our native woodpeckers in that they feed mostly on the ground, often pecking the dirt for insects and ants like other woodpeckers might hammer at a snag tree. I loved this reminder that the natural world is waking up, pairing up, and we can find peaceful moments among it while we navigate a frightening and tragic pandemic that our wildlife knows nothing about.

I did a double take when I read 27 degrees (!!) on my dashboard when pulled in to park at the Andrew Weeks Memorial Forest in Guilford, VT. This NEFF-owned forest is further protected through a conservation easement partnership with Vermont Land Trust. Winter was not releasing its grip just yet, or was it? A hopeful sign upon exiting the car was my first Louisiana Waterthrush of the year singing emphatically over Broad Brook. But today I had wildflowers in mind. I walked the Carriage Trail toward the historic Guilford Mineral Springs Farm site, while another Winter Wren sang from a hemlock grove. Trout lilies carpeted sections of the forest floor, though not yet flowering at this elevation, nor does every population flower each year anyhow. 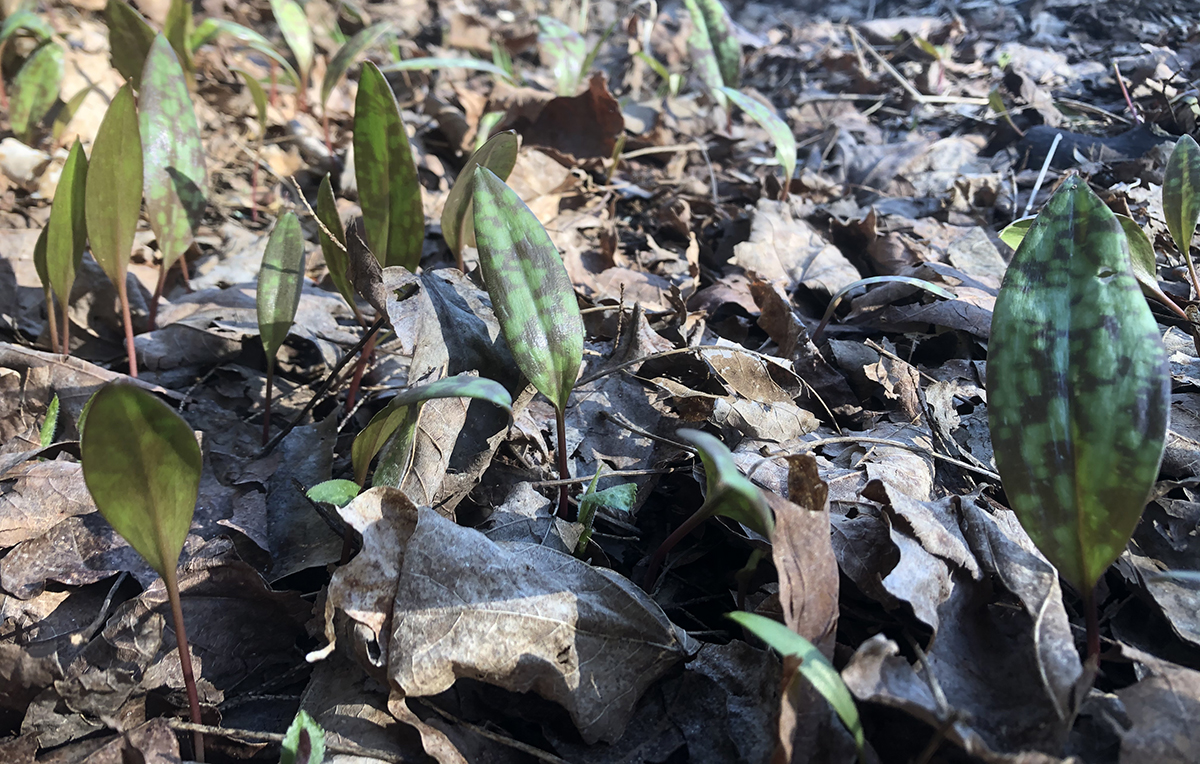 I reached the Farm site at the end of the maintained trail, no sign of the old structures visible today, though the unique walled brook channel and old bridge beams give away human impact here. 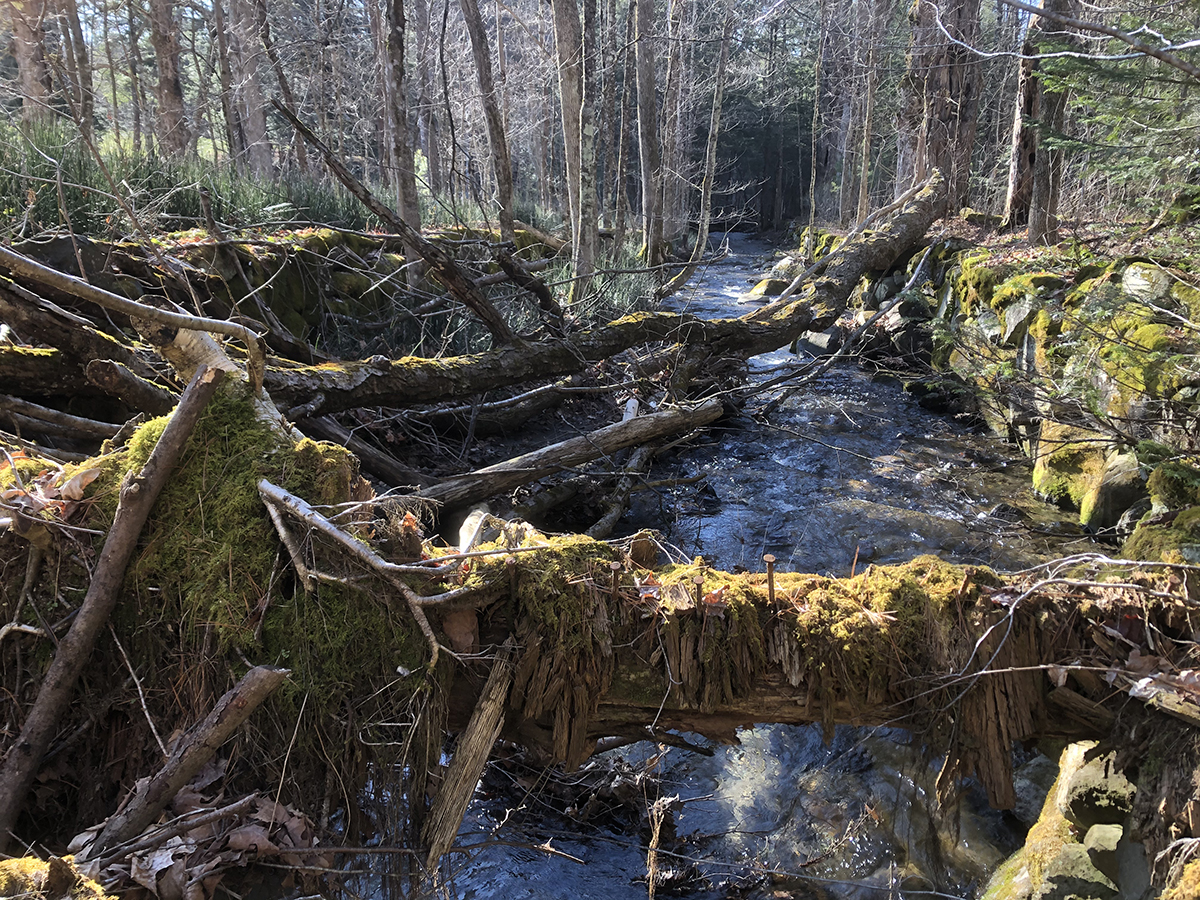 On my way back, how did I miss it? Right below grand sugar maples was exactly what I came for. 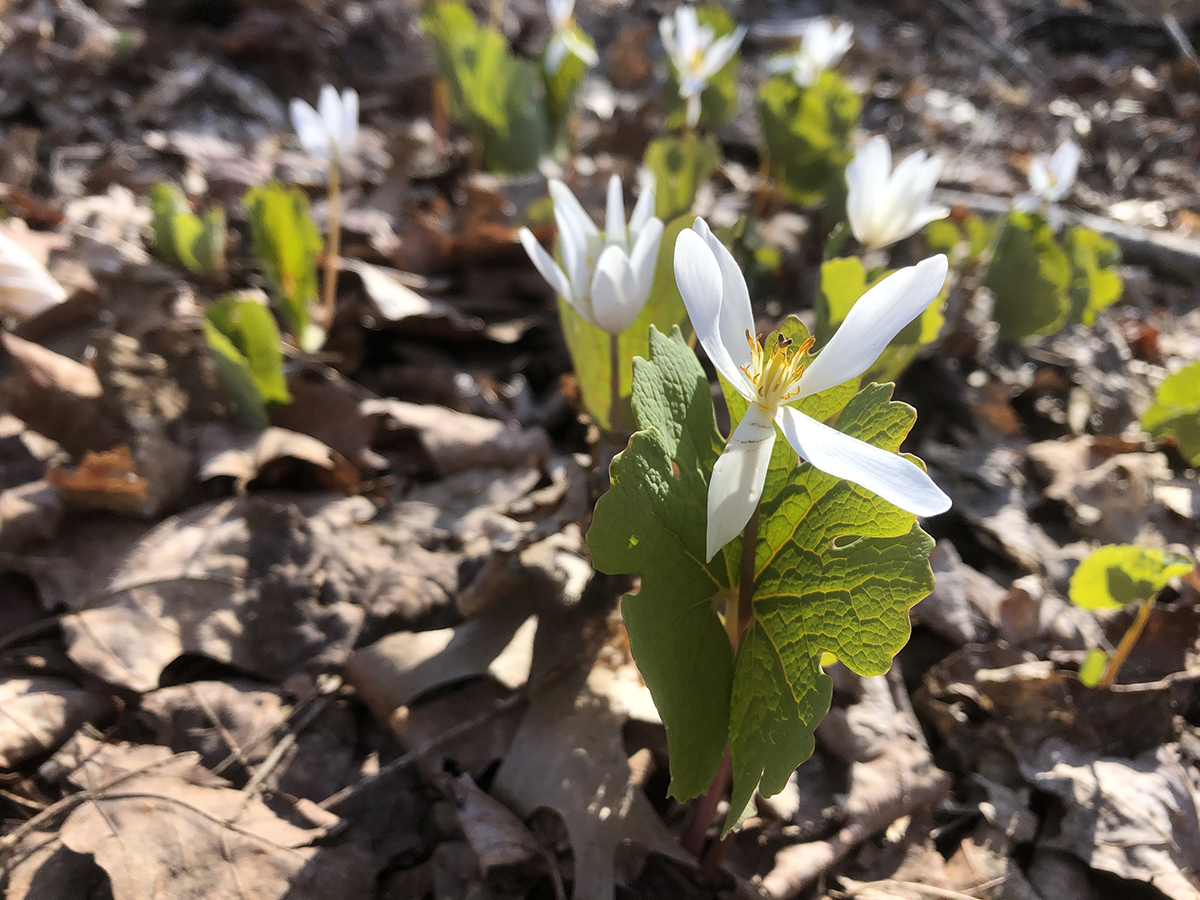 The leaves on the trees have a ways to go, but their absence allows bright early spring sunlight to reach the forest floor and ephemeral wildflowers like bloodroot to briefly flourish. The temperature had risen to 38 degrees on its way to a high near 60, and I left reassured that our mornings may still be cold but New England’s forests are beginning to become green again. 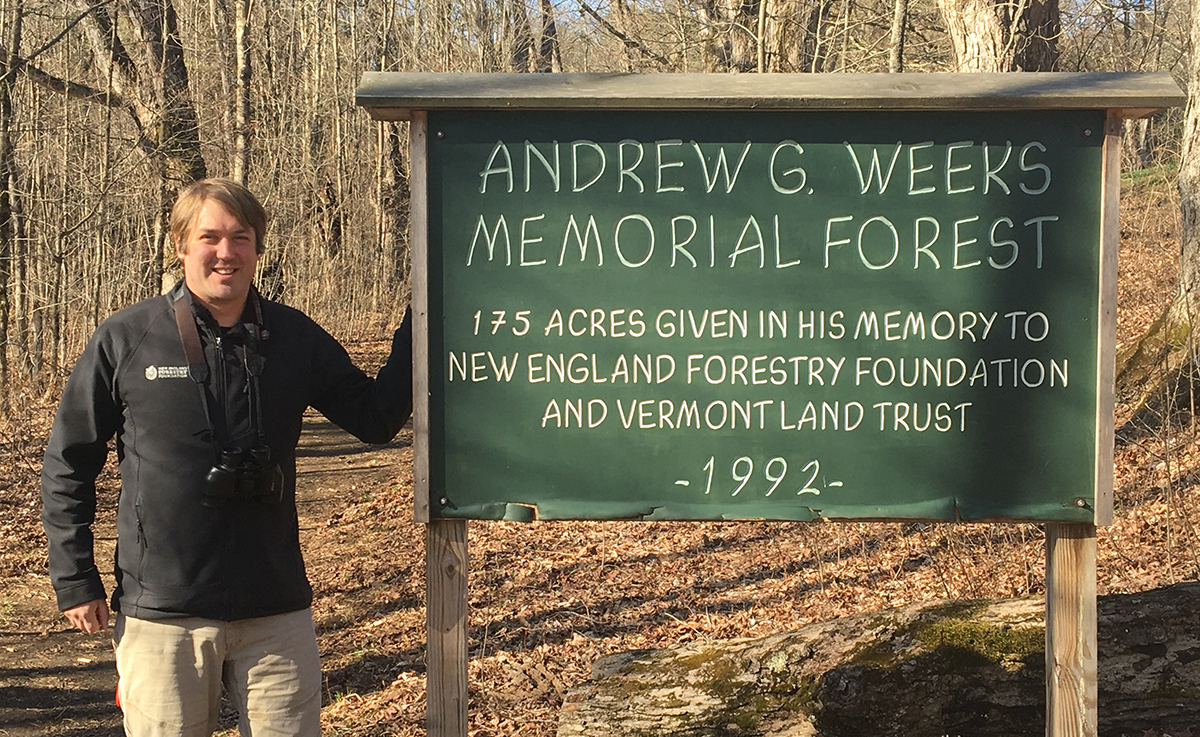 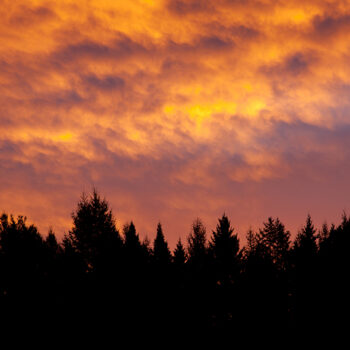 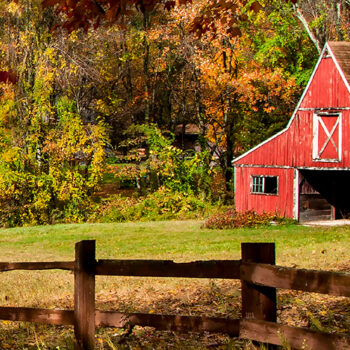