The Stories Behind John Serafin, Jr.’s Family Land, and the Lifetime of Stewardship That Saved It 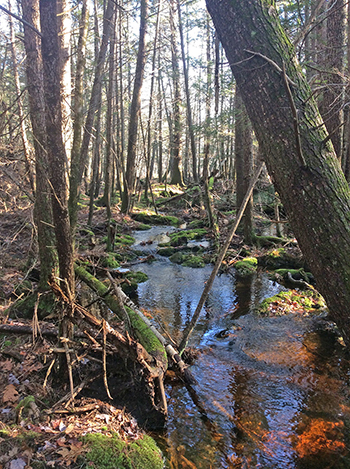 The Serafin easement in Stafford, CT. Photo by Andrew Bentley

A good day for John A. Serafin, Jr. is one when he can get into his truck and out to his woods in Stafford, Connecticut, perhaps firing up the chain saw to cut some downed trees for firewood. He knows every corner of the more than 350 acres of land he inherited from his father—from each pipe and stone boundary to the dense Mountain Laurel thicket, the White Cedar swamp near the Ellington town line and the pond where migrating waterfowl visit each spring and fall.

John, age 82, likes to head from his home in Tolland to the Stafford woodlands early in the morning to cut and split wood for 2-3 hours in fall and winter for his wood boiler. One thing he’s found very important in life, is “the need for a daily routine of exercise and activity. It clears your mind and helps you put things in focus, and just makes you feel much better.”

He can’t see bicycling or doing exercises: “When I’m getting exercise, I’m also gaining the benefit of a warm wood stove in the winter months and not spending the money on fuel oil.”

John’s dedication to the family forest may have grown from his love of being outdoors. Over the years, he took many backpacking trips in the United States and Europe, and made annual pilgrimages to the Adirondacks and White Mountains with his son David.

“I was born and grew up on the farm in Stafford. That’s rooted in me,” says John, who has generously donated a conservation easement to New England Forestry Foundation to preserve the land as forested open space for future generations.

He recalls going out with his parents to pick blueberries. “We relied to some extent on the woods for food,” he recalls. Too small to help much, he and his sister didn’t like the mosquitos and the understory was dense, and a bit “forbidding” to a child.

Later in life, after a year in the military and attendance at UConn and Cornell, he worked as a nutritionist for a U.S. Fish and Wildlife Service program attempting captive breeding of endangered species like the Whooping Crane and California Condor. Around 1983, John moved back from Maryland to Connecticut with his son David and (now ex-) wife Phyllis to take over the forest and greenhouse business from his aunt and uncle. He found a house to purchase in Tolland, Connecticut, but never considered moving to the Stafford land, perhaps because he considers himself a steward of the place.

“It never crossed my mind to build a house on the land in Stafford. At that point, I already determined we were going to keep it as long as possible,” he said. “We weren’t going to develop the property any further than those house lots my father sold in the 1950s… We wanted to try to keep the land and expand it as opposed to selling off building lots.”

His family history is tied to the land, but his ancestors were living in a different economic age. “My grandfather purchased the land and cut timber off it,” John said, noting that his grandfather’s name shows up frequently in Town Hall deed transfers. Some early farmers would buy up land with the goal of harvesting the trees to provide income, and then sell the parcels afterwards—at a time when cleared land was valuable for agriculture. When it came to the parcels on Charter Road, “for some reason he held onto it,” says John.

John hoped for many years that he would someday be able to conserve his forest. But the high estimate for a property survey of four separate parcels was a barrier. After returning a post card for a free visit with a land protection specialist in 2015, he met with NEFF staff and attended an estate planning forum sponsored by the MassConn Woods partnership. A MassConn conservation small grant helped offset the survey and other costs. Part of the land abuts property in Ellington conserved by the Northern Connecticut Land Trust, which was also supportive of the project.

Despite some health challenges, John’s goal finally became a reality with the recording of the conservation easement to NEFF in December 2019, permanently protecting 365 acres of Stafford, Connecticut, woodland from development while maintaining it in private ownership. 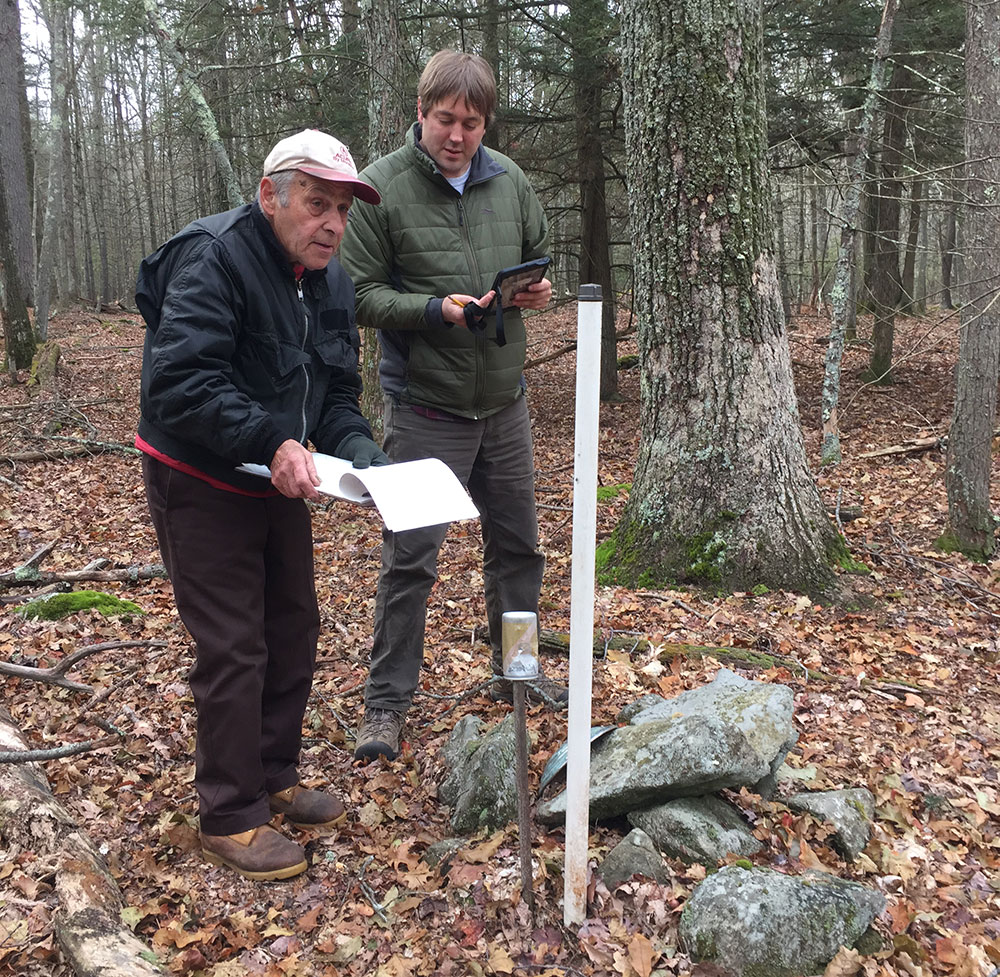 “It took me much longer than I anticipated. For me, it is such a relief to know the land is protected and will not be developed,” John said. “That part is so reassuring.”

When he’s in the woods, sometimes sounds from the community around him encroach—the roar of motorcycles on Route 140 or nearby Stafford Speedway—and John might drown them out with his own chain saw.

“Other times it’s perfectly quiet—very, very quiet,” he says, recalling times hunting. “You can sit there for an hour or two on an autumn afternoon just enjoying the silence. See an occasional bird or squirrel… studying nature and just observing nature, has always been interesting to me.”

One sunny, early December day when he was still operating the greenhouse business, John was in the thickets intent on pruning and gathering Mountain Laurel branches as bases for the weekend funeral arrangements they prepared in advance. The greenest, lushest stems were always on the edge where they get more light.

“I reached up as high as I could,” to grab more branches, “and all of a sudden a huge buck was there watching me. I never expected to be standing so close to a big buck like that.” He was startled, but in a moment, the deer bounded off into the woods, leaving John to his work.

Top photo: John Serafin on his land in Stafford, CT, with NEFF Board member Whitney Beals. Photo by Lisa Hayden 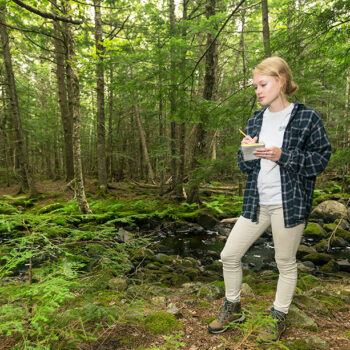 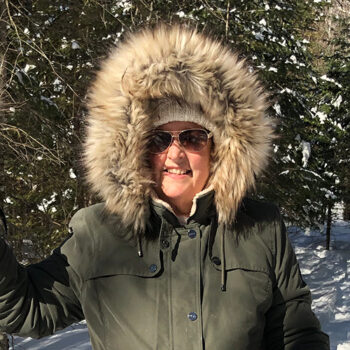