New England Forestry Foundation’s four new Downeast properties aren’t the only Maine parcels in its network of Community Forests. If you’re curious about NEFF’s 16 additional Maine forestlands, getting to know Arnold Family Forest, a habitat-rich property that sits at the intersection of land and sea, is a great place to start.

Located off Casco Bay about 15 miles northeast of Portland, Arnold Family Forest is bordered to the west by the seaward bound Lambert Point Stream and Redding Creek, and its southern border is just 1,500 feet from the bay’s shoreline.

“I have always found the meeting points of forests and water to be interesting and beautiful, particularly when that water is the sea,” said Chris Pryor, NEFF Director of Forest Stewardship. “The Arnold Family Forest is one of the few NEFF properties that borders tidal waters, and it does not disappoint.” 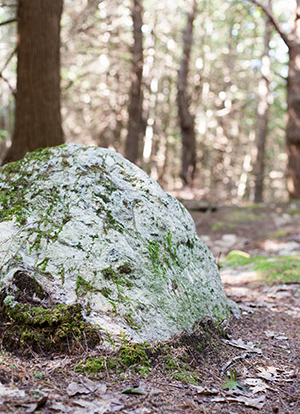 Well established hiking trails in the southern portion of the property wind through a mixed-species forest stand—composed of Eastern Hemlock, White Birch, Red Oak, Red Maple, Balsam Fir, and poplar—to a waterside view of Redding Creek. The northern two-thirds of the property consist of an oak-pine forest type that is common on the southern Maine coast as well as a small Eastern White Pine plantation.

The forest was last harvested in 2017. Harvest then included thinning in and around the pine plantation to encourage the growth of the dominant pines and remove poorly formed and mature hemlock, poplar, and birch in the abutting stands. This should improve growth of the remaining oak and maple. These management activities were conducted in a manner that minimized disruption to trail use and that fully protected the forest’s remarkable wildlife habitat.

Arnold Family Forest is part of an ecologically rich landscape that encompasses the northwest corner of Casco Bay, its adjacent lands and waterways, a host of peninsulas and islands, and several specialty habitats of critical importance like eelgrass beds. The Beginning With Habitat program of Maine Department of Inland Fisheries and Wildlife (MDIFW) has declared this area, now called the Maquoit and Middle Bay Focus Area, to be a place of Statewide Ecological Significance.

Within the Focus Area, MDIFW has prioritized four Significant Wildlife Habitats—all of them to do with wading birds, waterfowl, shorebirds and seabirds—and Arnold Family Forest’s stretch of Redding Creek frontage and riparian habitat have been designated as Significant Tidal Wading Bird and Waterfowl Habitat.

NEFF’s land stewardship team is well equipped to balance harvesting and other forest management activities with the preservation of this high-priority habitat; all NEFF Community Forests are managed to Exemplary Forestry standards, which call for the promotion of general wildlife habitat in addition to the protection of riparian habitat, aquatic habitat, and any other habitat deemed special—or Significant, in the case of Arnold’s tidal habitat.

What does this mean for visitors to Arnold Family Forest? Be sure to bring binoculars along, as there’s a decent chance you’ll see wading birds and waterfowl in and around the creek, and even if you don’t—you’ll still be smack in the middle of a wider birding hot spot.

Mast Landing Audubon Sanctuary, the Town of Yarmouth’s Spear Farm Estuary Preserve, Wolfe’s Neck State Park, and Bradbury Mountain State Park are all nearby, as is NEFF’s own Bliss Woods property. Arnold Family Forest and Bliss Woods are both subject to conservation easements held by the local Freeport Conservation Trust, yet another organization that offers nearby hiking trails—and a chance to see a few more birds.

In December 2002, Barbara H. Arnold and her family made a gift of this wooded property, which had been in the Arnold family for three generations. In 2003, Leo Blair donated an additional 28 acres to the Arnold Family Forest, which is now known as the Blair Addition and is home to most of the property’s trails. Fun fact: According to Mrs. Arnold, the forest’s white pine plantation was established in the mid-1960s to fill in the runway of an airstrip which her husband, Duncan Arnold, had built in the 1950s.

Where the Land Meets the Sea

The property’s corner of Casco Bay also receives regular visits from other water-dependent species like the Belted Kingfisher, Bald Eagle and Osprey. Of all the species listed here, Osprey were actually the birds spotted closest to NEFF lands.

Buxton silt loam soil is formed in a silt and clay marine sediment, and Scantic silt loam and Suffield silt loam soils are formed in marine sediment; most likely these soils formed after the glaciers last retreated from New England but before the land had rebounded upwards after being freed from the weight of ice. Thus, marine sediments are now above sea level. Tidal marsh soils have an organic layer over a silt, clay, and sand layer, and are flooded daily by tidal waters.

Most of these marine soils suitable for forestry—i.e., all but the soil in a tidal zone—perform about as well as Elmwood and Hollis soils when it comes to preventing tree blowdowns, but Scantic silt loam is noted as having “a severe potential for windthrow.” Paired with strong winds coming in off the ocean and bay, such soil types contribute to blowdowns, and Arnold Family Forest was indeed harvested in 2008-2009 in part to salvage timber lost to blowdown; foresters also conducted some thinning, partially to preserve windfirm trees. 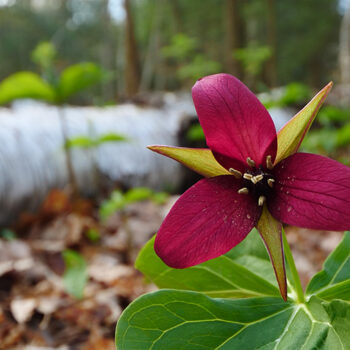 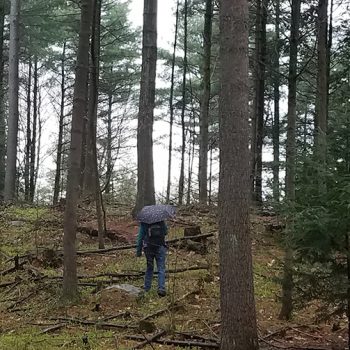