At the end of 2020, New England Forestry Foundation received its second land donation to the Pooled Timber Income Fund (PTIF)—the first donation came from Richard and Cynthia Perkins in May 2020—a new and innovative planned giving tool now in its third year of operation.

This new land is particularly significant to the history of forestry in New England, as it was owned by David M. Smith, author of the touchstone book, The Practice of Silviculture, and a long-time professor at the Yale School of the Environment—the oldest operating school of forestry in the United States. His book has been released in four editions and in several translations, and at the time of Smith’s death in 2009, the Yale University public affairs office called this book the most widely used forestry text in the world. Which is to say, this donated property likely helped shaped the practice of forest management as we know it today.

The land was donated by Dr. Smith’s daughters, Nancy and Ellen Smith, who will receive lifetime income from NEFF’s management on the 117 forest acres they donated and the 14 properties already in the fund.

NEFF also received two cash donations into the PTIF as 2020 drew to a close; this opens up a new avenue for individuals who might not have land to donate but would like to put their cash to work for conservation and simultaneously provide a stable stream of income for themselves or their children. With these donations, the PTIF is now well and stably launched, with several available pathways for individuals and foundations to advance conservation.

What Is the PTIF?

The Pooled Timber Income Fund offers landowners the opportunity to permanently protect their forestlands and receive tax benefits and lifetime income. It simultaneously accelerates the protection of working woodlands in the region, and it provides short and long-term security to woodland owners.

The PTIF is a new application of the well-established planned giving tool, the pooled income fund. As in a traditional pooled income fund, donors contribute assets to a charity, the charity invests the assets, and the income after expenses is distributed to the donors until their death, at which point the assets belong to the charity. Donors receive both lifetime income and a charitable tax deduction at the time of the initial donation. What makes the PTIF different is that in this model, landowners donate their land to NEFF for permanent conservation, and the timber on that land to a pooled income fund set up and run by NEFF. The landowners receive units in the fund proportional to the value of their timber donation and the fund manages the timber in accord with NEFF’s green-certified, Exemplary Forestry practices. Cash donors similarly receive units, and NEFF will use the cash to conserve new forestland.

Because timber is harvested in most years from one or more of the pooled properties, each member of the fund receives a more even stream of funding than by owning their own forestland, and there is a reduced risk of loss from weather, insects, various hazards, and reduced risk regarding timber prices due to the greater diversity of timber species and age classes.

Participants in the PTIF are eligible for a number of potential tax benefits (i.e., income, property and estate taxes), the value of which will depend on personal circumstances. NEFF will pay property taxes on the property while it is enrolled in the PTIF. On the death of the landowner’s beneficiaries, the landowner’s shares are transferred to NEFF and the donor’s share supports NEFF’s ongoing forest conservation work.

The PTIF is a great tool to help with advancing land conservation and spreading Exemplary Forestry throughout New England. This tool is unique in its ability to provide donors with both financial benefits and conservation benefits. By supporting this tool, we can further help the people of New England to sustain their way of life, protect forest wildlife habitat and ecosystem services, and mitigate and adapt to climate change. 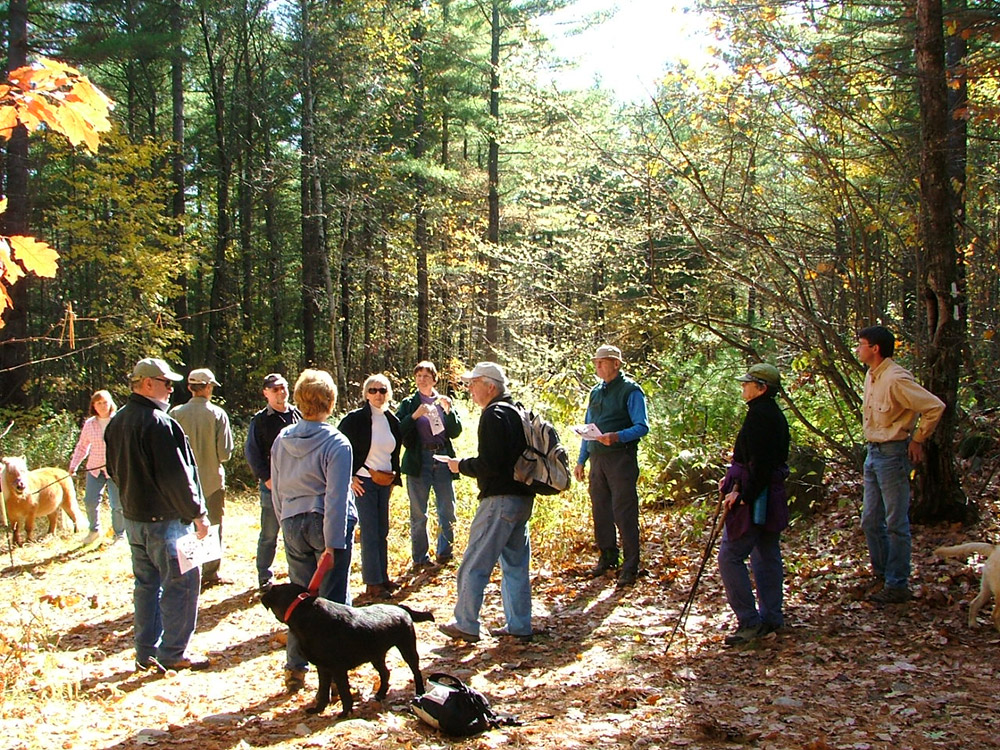 While leading an October 2008 walk-and-talk event at the Smith property, Matt Kelty (pictured center wearing a knapsack) explained both how Dave Smith managed the land and influenced silviculture. Kelty was one of Smith’s students at Yale and inherited co-authorship of his textbook, The Practice of Silviculture. Kelty also served on the board of the Rattlesnake Gutter Trust. Photo by Mary Alice Wilson

Nancy and Ellen Smith live out of state and inherited their 117-acre property in Leverett, Massachusetts from their father, Dave Smith. They have decided to name it in his honor as the David M. Smith Forest. Smith was as famous as a forester gets, and was well-known and well-regarded for his decades of work as a forestry educator and for promoting good forestry management in New England. His youthful familiarity with this new PTIF forestland helped inspire his career choice, and the six decades he spent managing it surely shaped his later work.

The Smith woodland—made up of mostly white pine and oak, hemlock, mixed hardwoods—sits on Rat Hollow Road and lies next to the Mosher Conservation Area, which is owned by the Rattlesnake Gutter Trust. The Rattlesnake Gutter Trust also holds an easement on the Smith property and helps to maintain the property and provides public access to the woodlands, which contains several trails for recreation, including a portion of the old Metacomet and Monadnock (M&M) Trail. In addition, the Smith property has adjacency or close proximity to a number of conserved parcels in Leverett. The Mosher Conservation Area and Paul C. Jones Working Forest lie to the north, and the Roaring Brook Conservation Area and the D.H. Banks Sanctuary lie to the south. These areas of conservation create thousands of acres of contiguous forestland.

NEFF plans to continue Dave’s careful management. The PTIF uses Exemplary Forestry management on all of its properties, which leads to older, more diverse forests with a mix of tree age classes. Research suggests that this type of forest management makes the forests more resilient to climate change impacts and better able to adapt to them. The forest also grows faster, and has a higher volume of wood than a typical forest at any point in time, which increases the benefit to society due to the forests’ action in removing damaging carbon dioxide pollution from the atmosphere. NEFF is honored to have Dave Smith’s land in the PTIF.

To explore whether donating your land or making a cash donation to the PTIF is a good match for your particular situation, please contact Sophie Anthony via email at santhony@newenglandforestry.org or by phone at 978-952-6856, x 122. 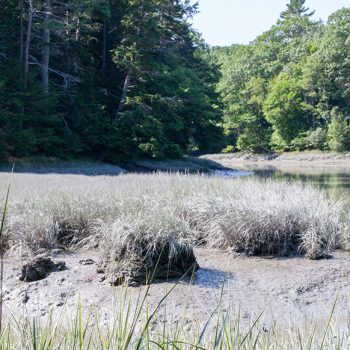 Notes From the Field: Searching for Historic Boundaries 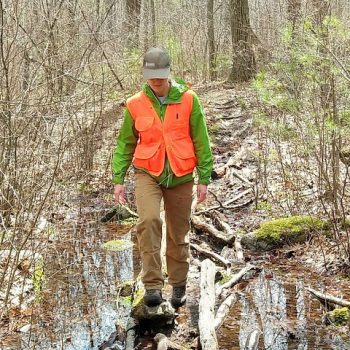