In summer 2021, New England Forestry Foundation (NEFF) ran a climate solutions special issue of its newsletter, Into the Woods. The issue’s introduction and four articles are closely tied together, and so have been posted online as a single series of blog posts. Here are links to the series:

New England Forestry Foundation has set a bold goal for its Exemplary Forestry Center: provide 30 percent of the carbon dioxide emissions reductions needed in New England. Good thing NEFF also has a bold solution to bring to the table: Exemplary Forestry, the gold standard of sustainable forest management and the strategy that distinguishes NEFF’s climate-solutions work from related approaches.

While improved forest management is gaining recognition as a way to increase forests’ climate mitigation impact, NEFF is the only organization to actually chart a path forward by producing climate-smart forestry standards for the entire New England region.

NEFF’s forest management delivers high carbon stocking, forest productivity, wildlife habitat and other benefits. Articulating these practices as a set of standards allows us to apply them to the climate crisis by offering an easily understood approach that assures short-term climate performance; it also allows us to model the climate benefits that could be achieved if policy and incentives were aligned with landowners’ needs to help address the climate crisis.

Exemplary Forestry outlines the highest standards of sustainability currently available to New England forest owners for these critical goals, which is just one of five ways the approach distinguishes itself. Unlike all other sustainable forest management approaches, Exemplary Forestry aims for specific, quantitative outcomes in terms of forest productivity, stocking and size-class distribution; its standards are direct and easy to understand; it takes the wider landscape into account when determining how to manage specific land parcels; and it maintains or increases managed forests’ carbon stocking over time.

How the Standards Work

NEFF’s Acadian Forest Exemplary Forestry standards were published in 2018, and the Central and Transition Hardwood standards will be fully ready in winter 2021. Both sets are built around one to two pages of measurable outcomes backed up by references to best practices and manuals for how to achieve those outcomes. For example, the standards specify:

Exemplary Forestry balances a given forest tract’s management with that of nearby lands, so as to create an entire landscape that meets Exemplary Forestry’s habitat goals. This means that as a landowner makes decisions about when and where to harvest, for example, they would consider the overall availability of certain habitat types and corridors in their region.

As noted in the story, “Climate Solutions: A New Climate Wedge,” detailed modeling of the Acadian standards’ results shows Exemplary Forestry management can, over time, dramatically improve the quality of residual stands, increase both the volume and value of harvests, and dramatically increase in-forest carbon stocks. 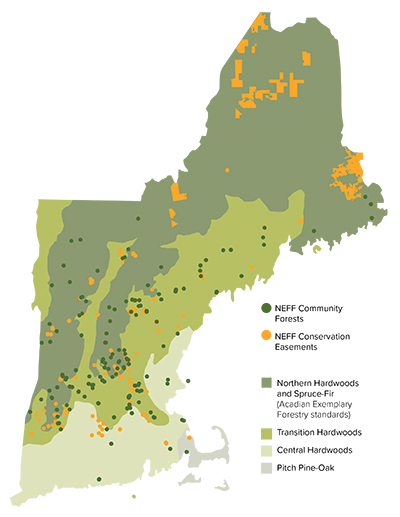 Transition Hardwood forests are found between Acadian Forest types—spruce-fir and Northern Hardwoods—and Central Hardwood forests, which are common through West Virginia, Pennsylvania and other Appalachian states and reach the northernmost point of their range in New England. Climbing Mount Mansfield in northern Vermont, near NEFF’s Morrison Memorial Forest, demonstrates Acadian types: hikers head up through Northern Hardwood forests and then reach spruce-fir before emerging above the tree line. The Wapack Trail, which crosses NEFF’s Lincoln Davis Memorial Forest in southern New Hampshire, runs almost exclusively through Central and Transition Hardwoods.

To meet the habitat needs of the full range of native species, the Central and Transition Hardwood standards call for the protection or creation of three habitat types: relatively mature interior forest, early successional forest, and edge and transition-stage forest. As we examined the scientific information available about this region, we discovered that instead of one umbrella species per habitat type, a group of species would function more consistently across the region. For example, for mature interior forest, we plan to manage for the habitat needs of Scarlet Tanager (pictured above), Wood Thrush, Black-throated Blue Warbler and tree-dwelling bats.

The concept of sustainable forestry has evolved over time, from an early focus on sustained wood production to a modern approach that encompasses the management of forests for a broad array of values, from ecosystem services to biodiversity, ecological resilience, and equity of access to forest resources. The climate emergency demands an expanded definition of sustainable forestry that includes a new and robust set of goals and outcomes that ensures forests play as large a role as possible in mitigating climate change. Look for NEFF’s paper on this topic—and our proposed definition—by early 2022.

*Most of NEFF’s Exemplary Forestry management strategies schedule harvests on average every 15-25 years. 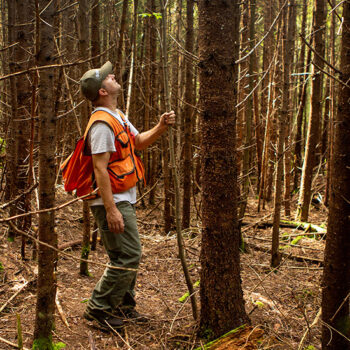