In 2019, with the Acadian Exemplary Forestry standards officially a feather in NEFF’s cap, we turned our attention to the woodlands of southern New England and the creation of equally powerful standards for this significantly different setting.

NEFF again engaged an expert outside advisory group to work with our staff ecologists, foresters, and climate experts. After careful research, analysis and review, this team has now successfully crafted Exemplary Forestry standards for New England’s Central and Transition Hardwoods.

NEFF has worked since its 1944 founding to improve forest management and implement these advances on its lands, and NEFF staff has codified both this approach and the science and silviculture that support it to produce Exemplary Forestry. Today, Exemplary Forestry sets what NEFF believes are the highest standards of sustainability available to the region’s forest owners for three key goals: enhancing the role forests can play to mitigate climate change in the critical 30-year period, improving biodiversity and enhancing wildlife habitat for the full range of species present, and growing and harvesting more sustainably produced wood.

NEFF’s two sets of standards—the first for the Acadian Forest region of northern New England, and the second for the Central and Transition Hardwood forests found south of the Acadian Forest—have the same broad framework. They both preserve the full suite of ecosystem services when implemented and have the same three key goals; both sets of standards lay out specific and measurable practices to achieve these goals simultaneously; and both take the wider landscape into account when determining how to manage specific land parcels.

However, the details within that framework look pretty different from one set of standards to the other. Not only do climate zone, elevation, and forest types shift as you move from northern Maine to coastal Connecticut, but so too do human-controlled factors like forest stocking levels.

With long-term implementation in Central and Transition Hardwood forests, these new Exemplary Forestry standards will diversify wildlife habitats and maintain approximately half of forest stands as large, older trees of sawtimber size. They do not apply to, but compliment, ecological reserves, which make up nine percent of all of NEFF’s land holdings and are a crucial component of the New England landscape.

The actual forestry standards and metrics are supplemented by a range of materials, including Best Management Practices on topics like protecting soils, a summary of the process NEFF uses to evaluate an individual forest parcel’s habitat potential in the context of its landscape, and an analysis of how the standards will be implemented to address the challenges presented by climate change.

Collectively, the documents provide an explanation of NEFF’s approach to forest management, and will help other forest owners and managers implement Exemplary Forestry. They are currently available by request and will be posted to NEFF’s website.

Of the Central and Transition Hardwoods standards themselves and their supplemental materials, those that address wildlife, forest types and climate change mitigation vary the most when compared to Exemplary Forestry for the Acadian Forest.

The Central and Transition Hardwoods standards call for managing the forested landscape for three groups of umbrella wildlife species, or wild animals whose habitat needs encompass the needs of many other species. The groups are associated with three kinds of habitat—mature interior forest, early successional forest, and edge and transition-stage forest—and include a delightful range of animals. While the Acadian standards target habitat for the American Marten and Canada Lynx, the new standards branch out into bats, bees and birds in addition to four-footed mammals.

NEFF’s choice of the Acadian umbrella species was driven by the research findings of University of Maine biologists that specifically identified such species. Selecting options for the new standards proved challenging, as existing research doesn’t point to just two ideal umbrella species. This meant selecting a suite of wild animals, rather than one, to represent each habitat type. View the standards and metrics for the complete list of species.

These species’ habitat goals apply to each forest type the standards account for, specifically, the five most common and economically important forest types in the Central and Transition Hardwoods region: Oak-Hickory, White Pine, Oak-Pine, Hemlock and Lowland/Riparian Hardwood.

Hardwood forest types play a bigger role in NEFF’s more southerly Exemplary Forestry standards because southern New England represents the transition area between the Acadian Spruce-Fir forests to the north and the deciduous (hardwood) forests to the south.

Large areas of the Central and Transition Hardwoods forest region are heavily stocked and thus already store a large volume of carbon. When drafting this new set of Exemplary Forestry standards, one of NEFF’s top priorities was determining how to manage heavily stocked stands in a way that will mitigate climate change in the near term while still accomplishing Exemplary Forestry’s other two key goals.

Given the climate crisis, it’s crucial that both forest managers and people working on climate solutions understand forestry’s immense near-term climate potential. NEFF has used available simple modeling and available data to calculate the net greenhouse gas impacts of implementing Exemplary Forestry silviculture, including the effects on carbon in the forest, carbon stored in wood products in use and in landfills, substituting wood products for non-wood alternatives, and burning wood waste in place of fossil fuels to produce energy.

The analysis showed a mix of careful thinning to remove the least vigorous trees and small-patch irregular shelterwood cuts, as recommended by Exemplary Forestry, can produce wood in a way that reduces greenhouse gas levels within 30 years, even when applied in high-volume stands. Given that demand for wood is growing, and that wood production elsewhere may not be climate beneficial, it makes sense to produce as much wood locally as possible, while also meeting the other goals of Exemplary Forestry.

If you’d like to get a feel for the technical details of Exemplary Forestry, NEFF’s forestry experts have distilled the Central and Transition Hardwoods practices into a one-page overview that describes how they should be implemented and lists landscape-specific standards and metrics. Most of this overview is included in the PDF below, but the complete document and its citations are available here. If you’re unfamiliar with the technical aspects of forestry, a glossary found beneath the PDF may prove useful when reading. 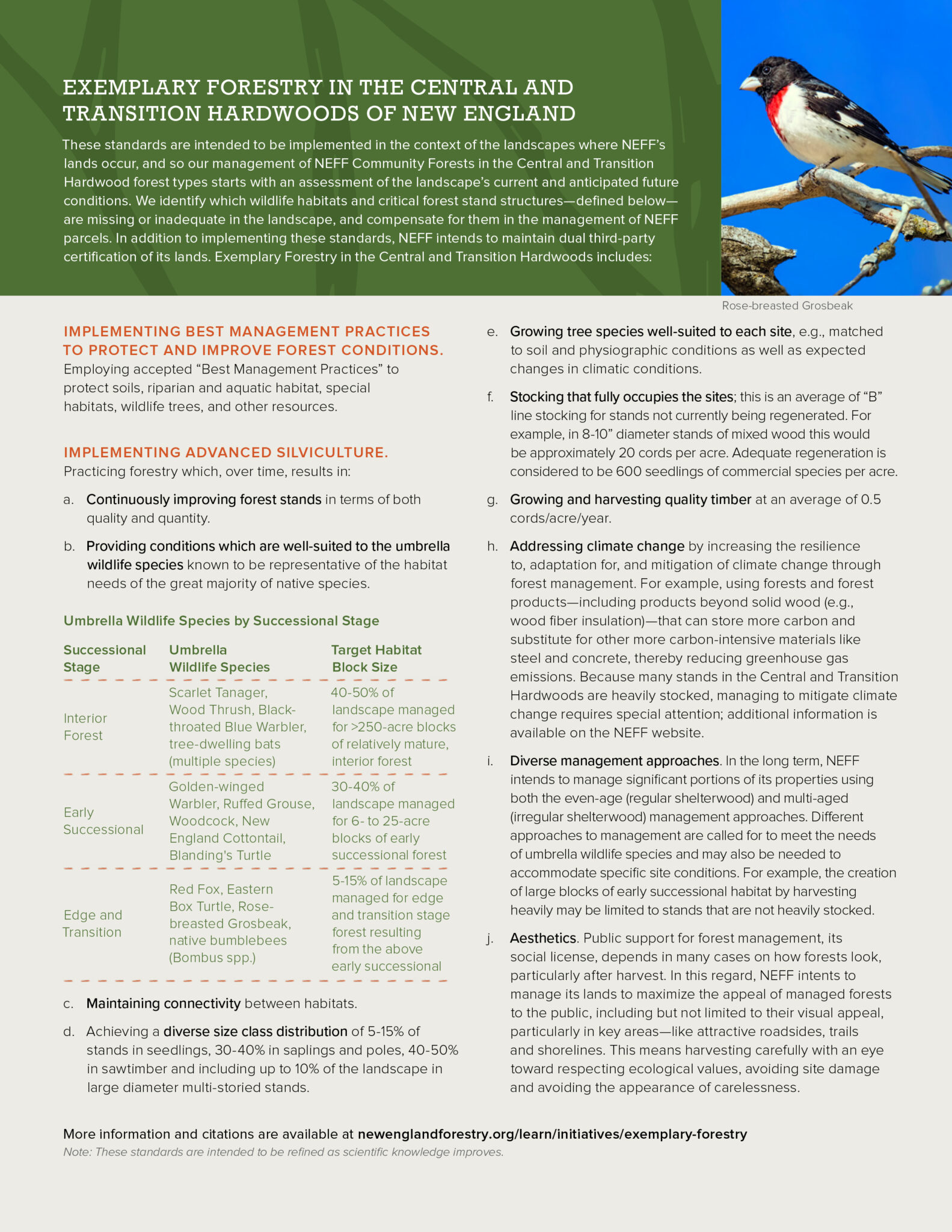 If you’re unfamiliar with the technical aspects of forestry, this glossary of terms as used by NEFF may prove useful when reading the following one-page Exemplary Forestry overview. NEFF staff provided the italicized definitions, and non-italicized definitions were taken from Thom J. McEvoy’s Introduction to Forest Ecology and Silviculture-Third Edition.

*Note: Dbh is an abbreviation for “diameter at breast height,” or 4.5 feet above ground. 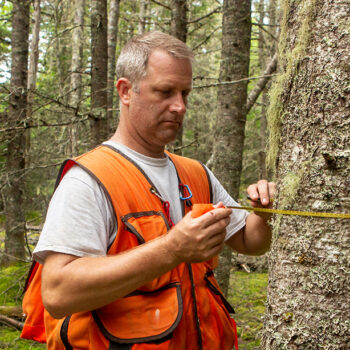