Rick Weyerhaeuser has been elected President of NEFF’s Board of Directors. Philip DeNormandie’s term as President ended in December 2021, and he will serve one more year on the Board in a new role as Immediate Past President before rotating off (learn more in NEFF’s “The Fun in Moving Forward” blog post). Rick, who is based in Cambridge, MA, initially joined the Board in 1999. He served as Board Clerk from 2013-2020 and Board Vice President from 2020-2021.

“I am really excited to be taking on the role of President at this critical point in NEFF’s long, rich history,” Rick said. “Climate change is an existential issue and the number-one priority facing the planet, and NEFF’s 30 Percent Solution provides a highly significant and cost-effective way to make a real difference in our regional context. Natural solutions are the low-hanging fruit in this battle, and NEFF accomplishes more conservation with fewer financial resources than any other organization that I am aware of.”

Currently, Rick is Senior Natural Resource Strategist for Sonen Capital, a San Francisco-based impact investment firm. From 2011-2014, he was Co-managing General Partner of Sustainable Resource Fund, a start-up that combined forces with Sonen in 2014. Prior to that he worked for 12 years as Director and Senior Project Manager for The Lyme Timber Company in Hanover, NH.

Rick has also worked with The Pinchot Institute for Conservation and The National Fish and Wildlife Foundation to develop and promote sustainable forestry programs in the U.S., has served as State Director of the Massachusetts Chapter of The Nature Conservancy, and for ten years was Director of the World Wildlife Fund’s Africa Program. He was a founding board and former executive committee member of the National Alliance of Forest Owners and has also served on the Boards of the Minnesota Chapter of The Nature Conservancy, The Center for Large Landscape Conservation in Bozeman, MT, and the Student Conservation Association, in Charlestown, NH. Rick is a member of the Leadership Council for the Yale School of the Environment where he earned a Master of Forest Science in 1983; he also received a B.S. from Yale College in 1977. 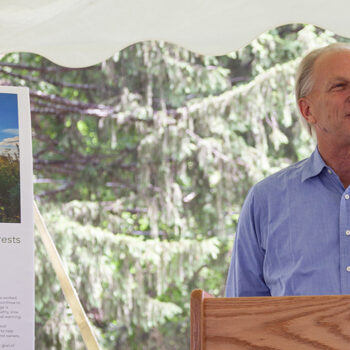