The IPCC August 2019 Special Report* states, “A sustainable forest management strategy aimed at maintaining or increasing forest carbon stocks, while producing an annual sustained yield of timber, fiber or energy from the forest will generate the largest sustained mitigation benefit.”

But forest health is much more complex than that, and finding the best pathway to mitigating climate change while protecting ecological values requires a systems approach and a systems-based question. Forests are intricate ecosystems that don’t just yield a single useful service—carbon sequestration and storage—but instead provide a wide range of ecological values and benefits, including clean water and air, opportunities for recreation, and bio-based forest products that help us move away from fossil fuels.

When protecting and managing forests, we need to balance critically important carbon storage with these other important values, particularly at a time when we’re losing biodiversity and facing an extinction crisis.

Some people think the best way to grow forests to mitigate climate change is to stop all harvesting, but that’s not the case, and the United Nations Intergovernmental Panel on Climate Change (IPCC) agrees—climate-smart forestry yields the best result. Under climate-smart sustainable forestry, forests remain healthy and biodiverse while simultaneously sequestering high levels of CO2 and providing bio-based forest products that can be substituted for climate-polluting materials like concrete, steel and plastic; they also produce everyday products like furniture, flooring and toilet paper that should continue to be made from forest products. If New England were to halt harvesting, local wood that went into those products would just be harvested elsewhere, likely in places with less stringent environmental regulations, meaning global CO2 levels would rise even as New England claimed a carbon-storage victory.

To really understand how to grow healthy forests while doing everything we can to mitigate climate change, we have to consider our forests in the context of our global economy and the many factors that influence climate outcomes.

Here’s the shocker when we apply this thinking to our New England forests: based on research conducted at NEFF and by partner organizations, New England can actually store more carbon in our forests than we are currently—and in some parts of New England, we can nearly double the current amount—while supporting the full range of forest ecological values through an integrated approach linking high-level forest management to forest conservation and protection of wildlands, or biological reserves that aren’t harvested. 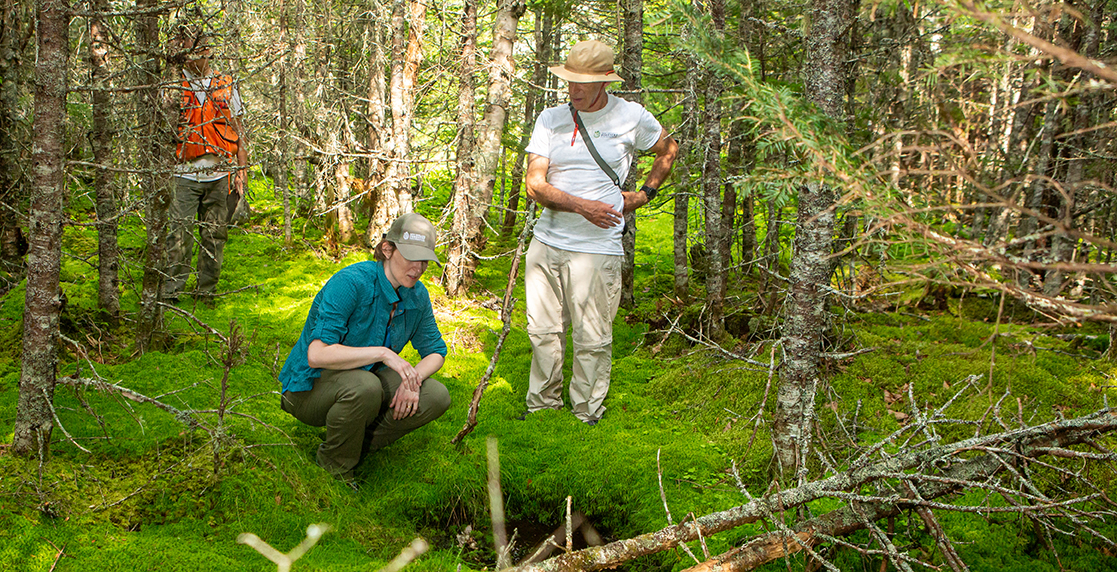 NEFF’s research shows that carbon-aligned Exemplary Forestry combined with conserving forests, and increasing the use of local, sustainable mass timber in tall buildings can offset fully 30 percent of New England’s required reductions in energy-related emissions in the next 30 years. The practice of Exemplary Forestry contributes the lion’s share of the 30 Percent Solution’s savings, all while preserving forests’ ecological values and benefits, and improving urban housing’s quality and affordability. This is more than can be accomplished by simply halting all harvests or continuing business as usual.

At NEFF, we believe we need to ask the right question, and it sounds like this: How can humans obtain the necessary resources for this and future generations to flourish sustainably while stewarding the biological diversity of the planet? How can forests help?

Our answer for forests is to set some lands aside as wild places, manage the rest according to Exemplary Forestry standards that increase the carbon in the forest while biobased products are produced, and then wholistically implement the 30 Percent Solution.

We are working with Highstead Foundation on a more intensive look at these opportunities and their analysis also confirms there is a tremendous climate opportunity in New England forests. The study’s results will be available later this year.

We are aware some people think the best use of all forestland for climate mitigation is to just leave it alone in a forever-wild condition. That conclusion is the result of not asking the right question and failing to take a systems approach to this complicated problem. In a world with no people, that might work, but in a world where we have to reduce atmospheric carbon, assure the survival of our global ecosystems and ensure the wellbeing of our global human population, it just doesn’t make sense.

Our global economy is heading in the wrong direction on the use of fossil fuel-based products* vs. bio-based products. Here are the numbers for rate-of-increase in product consumption from 1961 to 2017, a time period during which global population grew 2.45 times (data from An Introduction to the Circular Economy: Opportunities for Natural Resources and the Forest Sector. Dovetail Partners, 2020).

With long-term forest health as the guide, at NEFF we are thinking about redefining the recently coined concept of “proforestation” so it encompasses both wildland conservation and climate-smart forestry instead of pitting Exemplary Forestry against achieving long-term forest health, and portraying it as somehow less of a climate solution. Exemplary Forestry is precisely designed to do exactly this—improve forest health, increase biological complexity, and maximize carbon storage. But Exemplary Forestry goes one step further than “proforestation”—it seeks these goals in the context of human society and economy. Both schools of thought are “pro” forests. Both seek to improve and sustain healthy, diverse ecosystems. Both seek to maximize carbon sequestration and storage. Both recognize the need to create more wildlands. But NEFF is also thinking about the role of forests and forest products in helping to wean us from a fossil fuel-based economy and ensure a global decrease in CO2 emissions, not just of emissions in New England.

These combined meanings of proforestation are aligned and complimentary, and forest advocates need to work as partners to figure out how to simultaneously use forests to fight the climate crisis and the biodiversity crisis. But leaving all our forests alone is not the best approach for climate change. When we ask the right question and apply a systems approach to climate, studies indicate managing forests wisely with Exemplary Forestry gives us the most climate benefit in the next 30 years, and the U.N. agrees.

If you’d like to understand the science behind this article, NEFF Senior Forest Science and Policy Fellow Alec Giffen and Ecologist and Science Writer Colleen Ryan have provided summaries of relevant research below, and pulled together an invaluable annotated bibliography available for download at the bottom of this blog post. If you are new to the fields of forestry and natural carbon sequestration and storage, we encourage you to first read UMass Amherst and MassWoods’ “Forest Carbon: An essential natural solution to climate change” PDF before reading our annotated bibliography so you can understand its technical terms.

Research indicates definitively that the strategy that will produce the maximum reduction in greenhouse gas emissions includes ecological reserves, particularly to include heavily stocked older stands, alongside high-quality forest management to increase in-forest carbon levels at a landscape scale while sustaining or increasing harvest of timber in order to store carbon in long-lived wood products and substitute wood for other, more carbon-intensive, building materials. This may seem contradictory on its face, but, as the research below shows, it is not!

Based on the research that follows and the results of other studies, the IPCC (Olsson et al. 2019) summarizes the optimal role that forests can play in terms of reducing atmospheric greenhouse gases (GHG) this way: “In the long term, a sustainable forest management strategy aimed at maintaining or increasing forest carbon stocks, while producing an annual sustained yield of timber, fiber, or energy from the forest, will generate the largest sustained mitigation benefit.”

Active management, practiced carefully, can ensure that forests continue to provide important services, such as clean water and air, biodiversity, wildlife habitat, long-term climate mitigation, recreational opportunities, and economic benefits to local communities, while contributing substantially to the mitigation of climate change within the next 30 years. At the same time, passively managed ecological reserves are an important component of sustainable forest management that provide key ecological and societal benefits. Old growth stands and those with old-growth features should be a priority for inclusion in ecological reserves, and can contribute to climate change mitigation through the large stores of carbon found in the soils, trees, and legacy features of old-growth forests. Designating strategically located reserves is an essential strategy that must complement, but not replace, active management on the majority of the landscape.

Regardless of the specifics of the carbon balance on any given site, it is important to view forest management from a systems perspective. Maintaining harvest is critical from a climate mitigation perspective because when a harvest to meet global demand is halted by reserve designation, research shows that the harvest is shifted to another location, which can largely offset any benefit from increased stocking in the protected forest and often leads to even greater environmental harms, as resource extraction is shifted to places where the impacts are greater and regulatory oversight is weaker (Berlik et al. 2002).

Though the optimal balance of carbon storage in forests and products will vary by local conditions, the results of the following studies lead to the conclusion that the sustained yield production of wood is typically more beneficial than stopping harvest.

Need for a Systems Approach

Increasing wood production and carbon in the forest 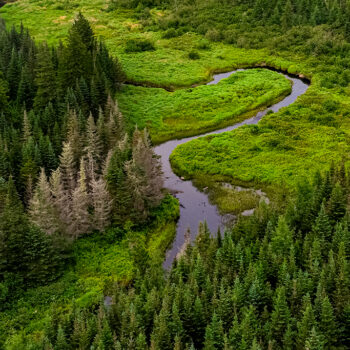 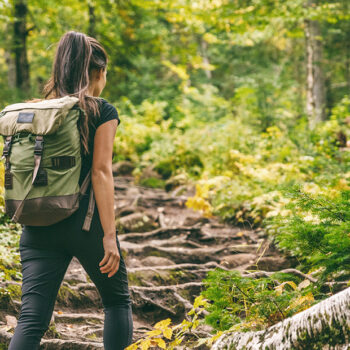