The Eastern Hemlock (Tsuga canadensis) is the tree with the longest lifespan in the eastern forest. It can live to be more than 800 years old, rivaling some of the giant trees of the Pacific Coast—the Coast Redwood, the Sitka Spruce, and the much larger Western Hemlock.

Eastern Hemlock naturally occurs as far north as the southern portions of Canada from Nova Scotia west through Ontario and into the lake states of Wisconsin and Michigan. It extends south through the mid-Atlantic states and continues south along the Appalachian Mountains into Tennessee, North Carolina, and the northern reaches of both Georgia and Alabama.

Eastern Hemlock is an evergreen conifer and so retains its needles year-round. Its short, shiny, dark green needles are flat with two parallel white lines along the underside. The bark on mature hemlocks becomes a reddish-brown with wide, flat ridges. Hemlock bark was the primary source of tannin for the leather industry in colonial America, which led to widespread harvesting of hemlock simply for its bark. Synthetic tanning agents replaced hemlock in the early 20th century.

Eastern Hemlock typically is around 60-70 feet tall with a normal diameter of 1-2 feet, but can be more than 3 feet in diameter and more than 100 feet tall under the right circumstances. Eastern Hemlock is one of the most shade-tolerant trees in New England. This trait allows it to retain its lower branches much longer than other species and survive for many years in the deep shade of the forest canopy. An Eastern Hemlock tree growing in deep shade that is shorter than a person and scarcely thicker than a thumb may be fifty years old, awaiting an opening that will provide it with the light to grow taller.

Hemlock is an important component of the forest when it comes to wildlife habitat, and numerous mammals both large and small feed on it. Deer and moose will browse the new growth and needles, while squirrels, chipmunks, voles, and other rodents will eat the seeds. Porcupines are known to clip off branch tips while feeding in the canopy. The Black-throated Green Warbler and the Blue-headed Vireo depend on forests that contain hemlock. 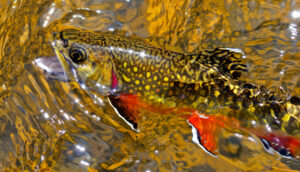 Across its range, the Eastern Hemlock can grow on a variety of sites. It is more often associated with moist sites like those along streams, wetlands, and seeps, but can also be found on drier, shallow soils on top of ledges.

Eastern Hemlock is not a particularly valuable species from a timber perspective, so it is not often managed for harvesting, but instead for its ecological value. Hemlock can be managed and regenerated using both even-aged and uneven-aged management techniques, but both require starting regeneration under a partial canopy. Hemlock would be outcompeted by faster growing hardwoods and softwoods under full sunlit conditions. New research at the University of Massachusetts may open up opportunities to use hemlock in cross-laminated timber buildings, which could create new markets for the wood. 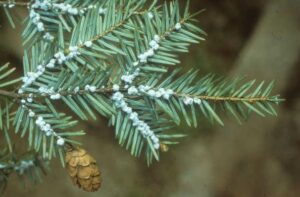 An invasive insect called the Hemlock Wooly Adelgid (HWA) poses a major threat to the Eastern Hemlock’s future. It is native to Asia and is thought to have been brought to the United States in the mid-1900s on nursery stock from Japan. HWA is a tiny insect that feeds on the sap of hemlocks by inserting its straw-like mouthpart at the base of the hemlock’s needles, stealing the nutrients needed by the needles and causing them to fall off. Without needles, the tree rapidly dies. The adelgids cover themselves in a white, cottony substance for protection, which makes identification easy.

The insect’s northward spread was thought to be constrained by sustained, cold winter temperatures, but the effects of climate change threaten to remove that barrier and open up more of New England’s forests to the HWA. With no natural predators in New England and little to no natural resistance in Eastern Hemlock, it is difficult to control this insect in a forest setting. Pesticides and horticultural oil can be used on high-value ornamental trees, but they are not viable for widespread use. Biological control using either fungal pathogens or other predatory or parasitic insects show potential but requires more research. The loss of the Eastern Hemlock would be a serious blow to the beauty and biodiversity of New England’s forests, so we can hope these efforts are successful. 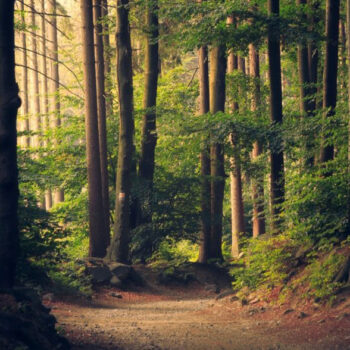 Notes From the Field: Race and the Outdoors, Through the Lens of Birding