Notes From the Field: A Rare Turtle Sighting

Notes From the Field: A Rare Turtle Sighting

During NEFF’s annual visits to conservation easements (CE), our primary purposes are to ensure each easement’s legal terms are being met, maintain good relationships with landowners, and document boundaries and notable manmade or natural changes around the property. While we always strive to be attentive to flora and fauna where possible, we only visit each NEFF easement once per year for a few hours, and our jobs require us to cover a good amount of ground rather than sit quietly for hours to observe wildlife and photograph and inventory species. We are lucky to catch a fleeting glimpse of an animal or chance upon a unique plant species. After all, attentive forest creatures have more than enough time to get out of my clumsy way while I loudly bushwhack in search of a remote boundary pin through a dense understory or trip over slash on a woods road while documenting a recent harvest. 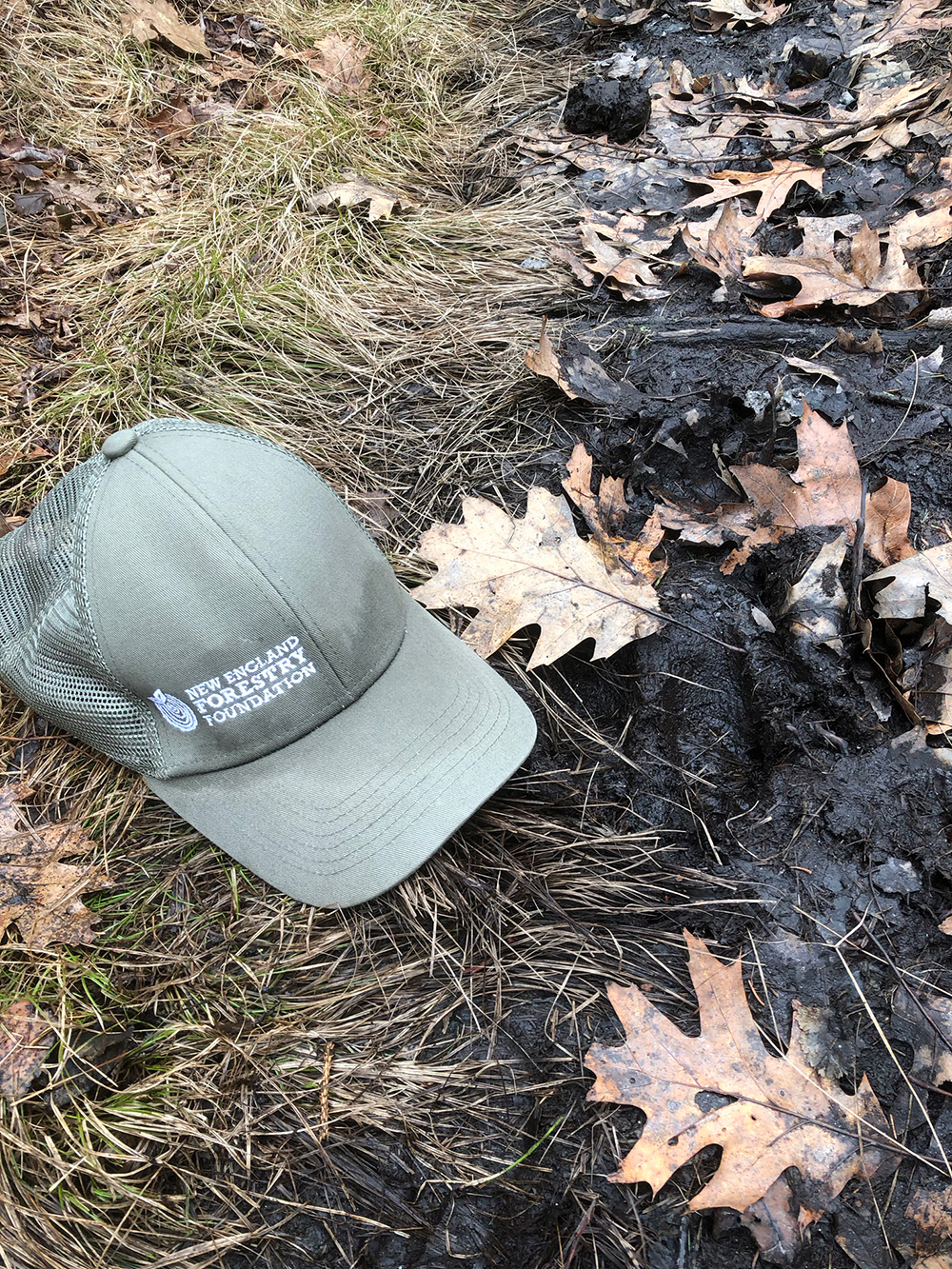 Moose track on the Wapack Trail on a CE in New Ipswich, NH. Photo by Andrew Bentley

Over my many years of easement visits, deer, porcupine, Barred Owls, and a coyote have made fleeting appearances; a mother Ruffed Grouse bluff charged me—a more startling experience than you might think—and beavers have given a tail slap before swimming away and denying me a photo. Bear and moose have offered me one quick look apiece—a young bear and I startled each other in a raspberry patch last Summer in Leyden, MA, and a bull moose in Downeast Maine saw us driving up a logging road from 200 yards away and lumbered off into the forest. None of these species typically stick around long enough to make it in to our annual report’s photo documentation, which can be a bit grainy anyhow considering field staff members take photos on an iPad Mini for ease of carrying. The usual observed signs are droppings and tracks, occasional brief sightings, and birds identified by call, all of which I dutifully enter it into the annual CE report in abridged attempts to bring the forest to life. We also have a handful of generously donated remote wildlife cameras, though only enough to deploy on one or two properties at a time. 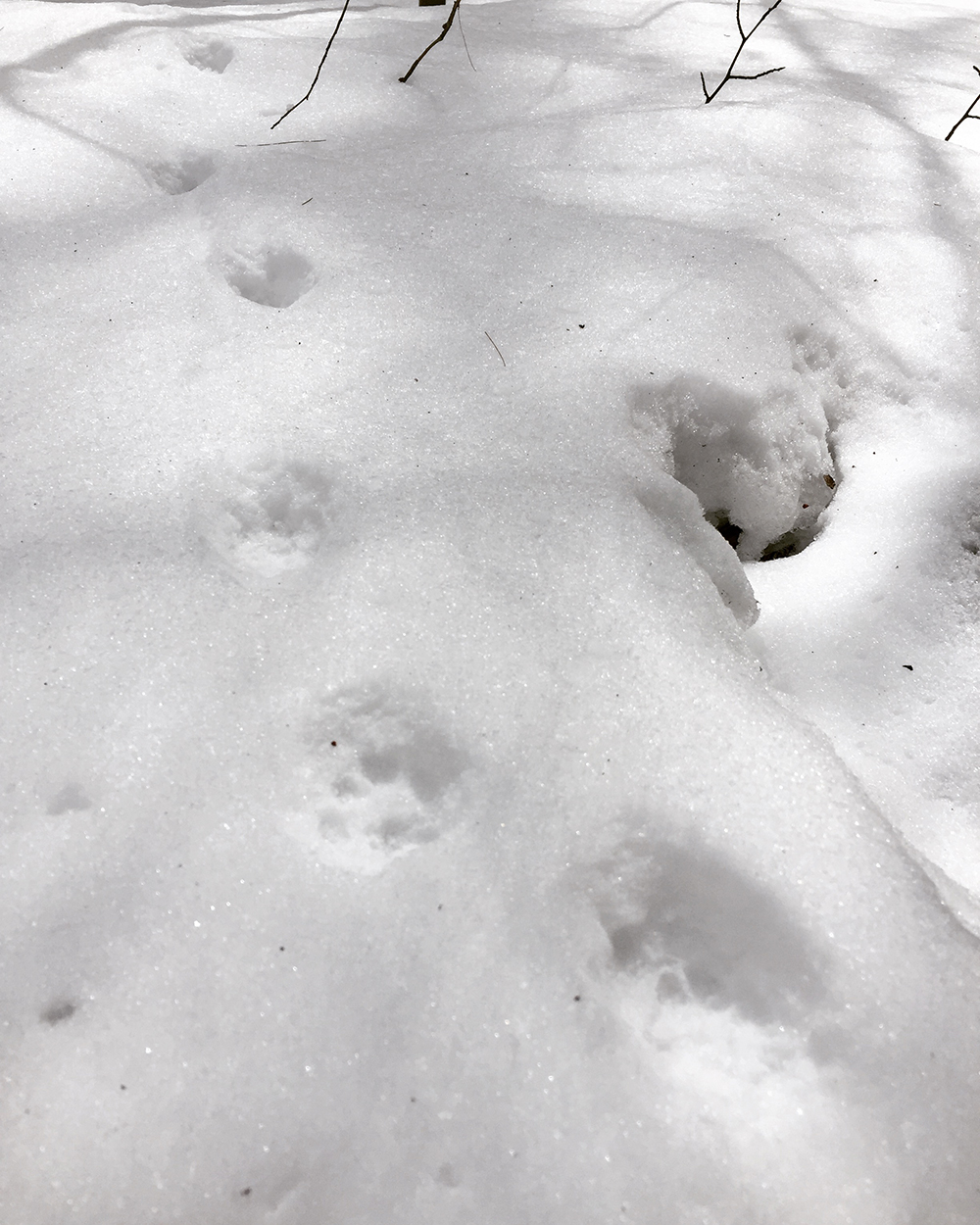 Given all this, I could hardly believe my luck when last June, I observed a species new to me from up close, right on a lightly used footpath on a southwestern-Massachusetts NEFF conservation restriction (CR) property! While I couldn’t immediately identify the specific species, I knew I was looking at a turtle. It did not even run away—this family of reptiles is not exactly known for their speed after all. Their protective shell deters most potential predators and makes swift escape a little less of a priority. 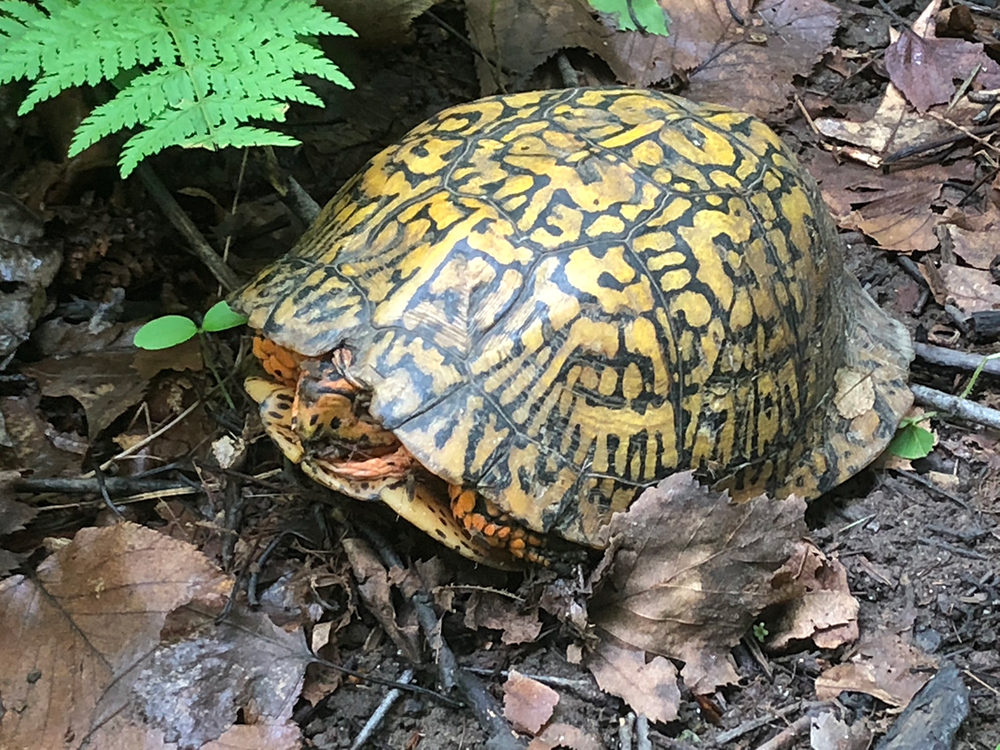 Eastern Box Turtle on the trail! Photo by Andrew Bentley

After wracking my brain, I recalled a few likely turtles that often utilize damp deciduous woodland habitat: the Blanding’s Turtle, Wood Turtle, and Eastern Box Turtle. I assessed the markings of the turtle in front of me, guessed its shell size at about six inches in length, and then took a quick look at the state’s helpful turtle webpage. This was not a Blanding’s Turtle (wrong part of the state, different markings, too small, and less likely to be found on land) or Wood Turtle (different markings, no nearby stream), but an Eastern Box Turtle! I texted a photo to a friend who I knew had some field experience with our native turtles, and he immediately replied, “it’s a female!” I had not gotten as far as identifying the sex of this box turtle. He sent back a very informative photo of a box turtle his crew recently found on a Mass Audubon sanctuary in southeastern Massachusetts where he was interning. 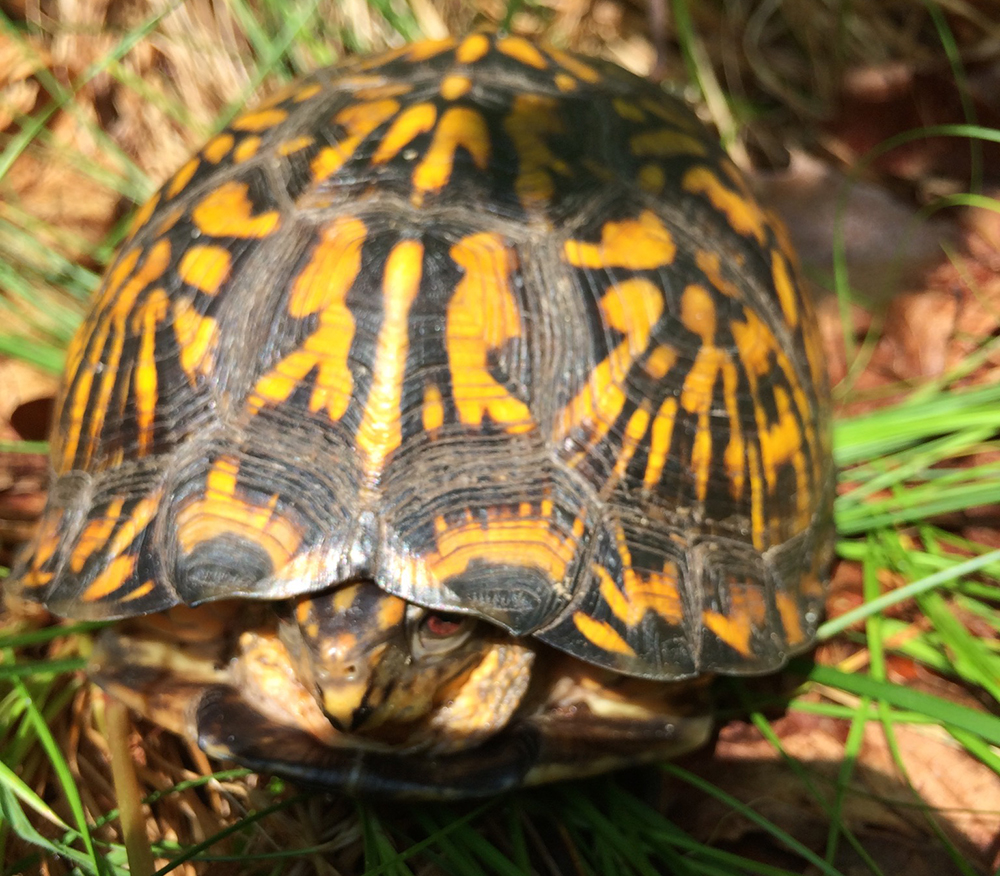 Turns out that the easiest way to tell male and female box turtles apart is that females have yellow eyes, like the one I found, and males typically have red eyes! They are found in a variety of habitats, including open deciduous woodlands and forest bottomland, and favor areas close to water or open field edges. Interestingly, younger individuals are chiefly carnivorous, and enjoy earthworms, insects, crayfish, moths, frogs, and snakes, among others, while older turtles favor vegetarianism and often consume leaves, grass, berries, and fungi. They typically live 60 to 80 years, and some have been known to surpass 100 years of age! They mate from April to early September, laying eggs in areas with open soil patches such as meadow and field edges, lawns, woodland openings, mulch piles, or sand or gravel pits.

Eastern Box Turtles are classified as a “Species of Special Concern” in Connecticut and the same in Massachusetts by the state’s Natural Heritage & Endangered Species Program (NHESP), thereby protecting them under the Massachusetts Endangered Species Act. Found from northern Florida to southern Maine and as far west as Illinois, Michigan, and Tennessee, these turtles are not particularly rare or endangered on a national scale, but they reach their northernmost range and become more uncommon in New England. They are considered endangered by the northern New England states, where there are only a handful of known populations in Maine, New Hampshire, and Vermont. While they are more widespread in southeastern Massachusetts where my friend was based, sightings are known to happen in western Massachusetts towns—including the one I was in—within the Connecticut River and Housatonic River watersheds.

In the past, like many of us, I have come across a couple of our region’s most frequently spotted turtle species—Painted Turtles and Common Snapping Turtles. Not particularly shy, the former can often be seen basking on logs or rocks perched above a pond or wetland’s surface, and the latter found swimming around ponds or lumbering its way between wetland habitats. There are a number of turtle species in our region that I have never seen—take a look at the previously mentioned state page or this MassAudubon webpage for a handy overview. 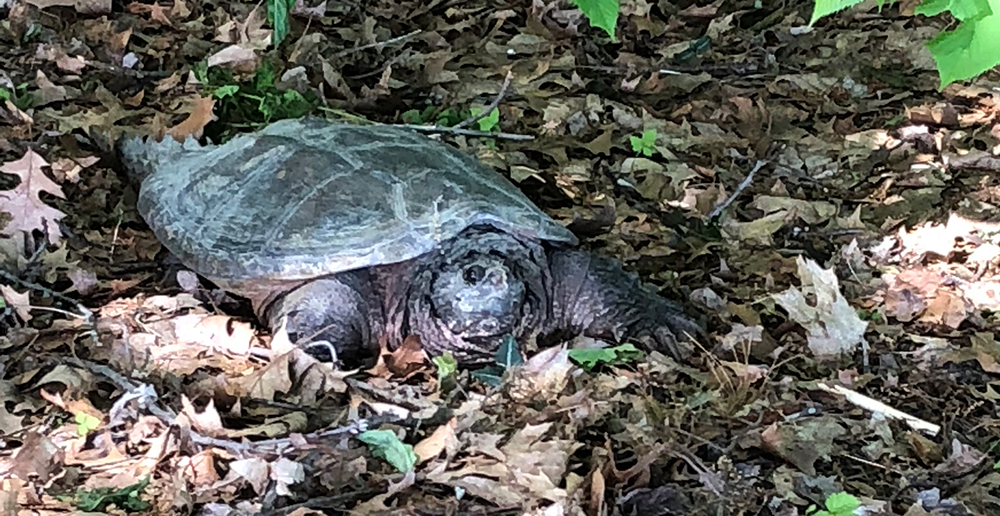 A mature (and intimidating) snapping turtle as it migrates between water bodies. Photo by Andrew Bentley 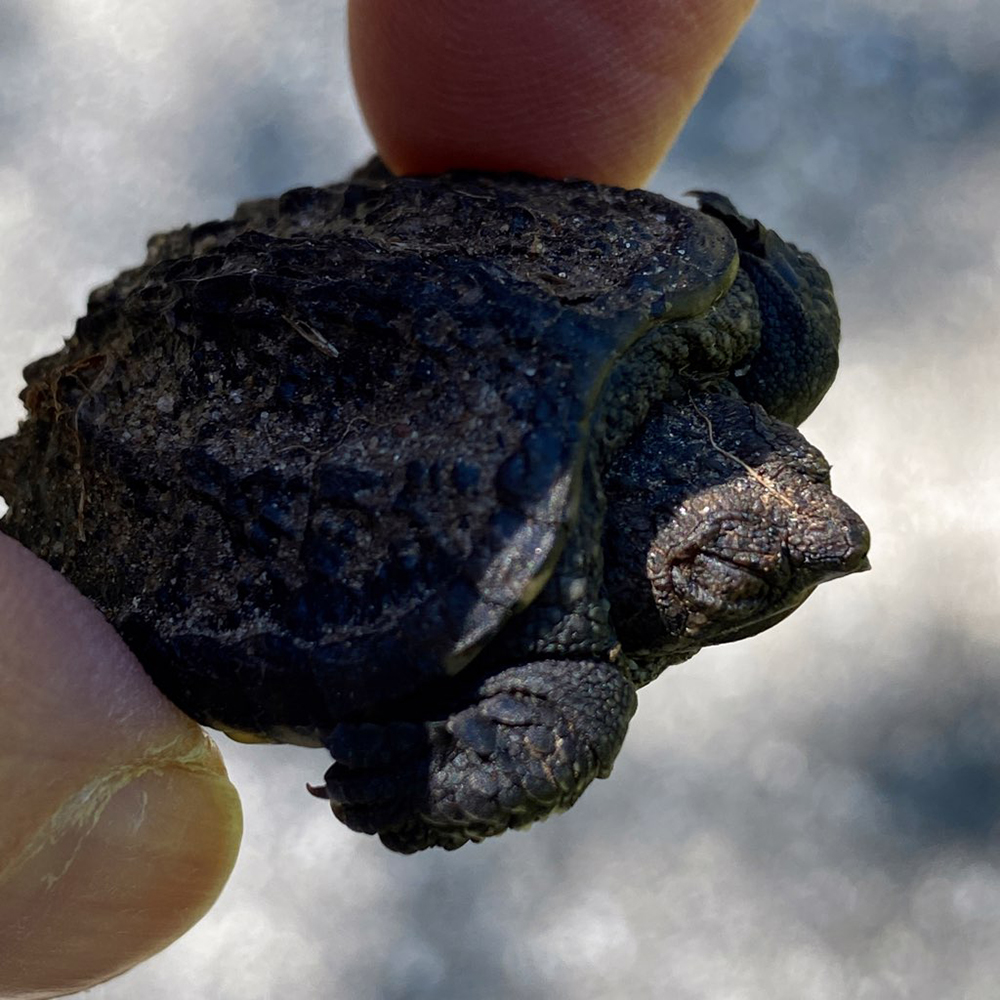 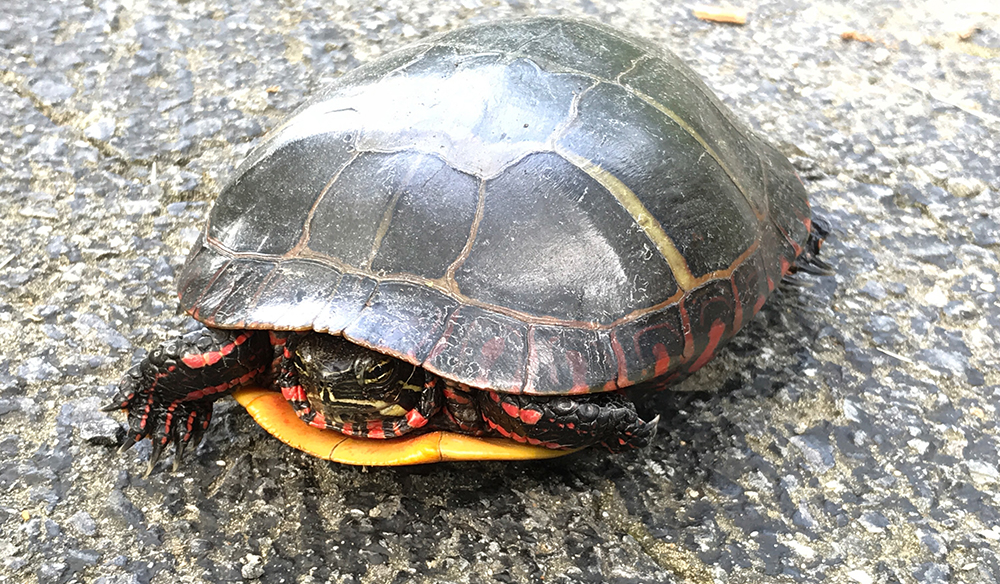 Painted Turtles are commonly seen basking on logs or rocks in ponds and wetlands, or crossing roads to find suitable upland locations to lay eggs. Photo by Sally Naser

Now, fast forward to just last week when I returned for NEFF’s annual visit to the same CR where I came across the box turtle last June. I was following the landowner’s trail through their lovely mixed hardwood forest, featuring enormous white oaks and even some scattered tulip poplars, a sturdy tree that is always a treat to observe locally as it reaches the northern edge of its native range in this part of Massachusetts. 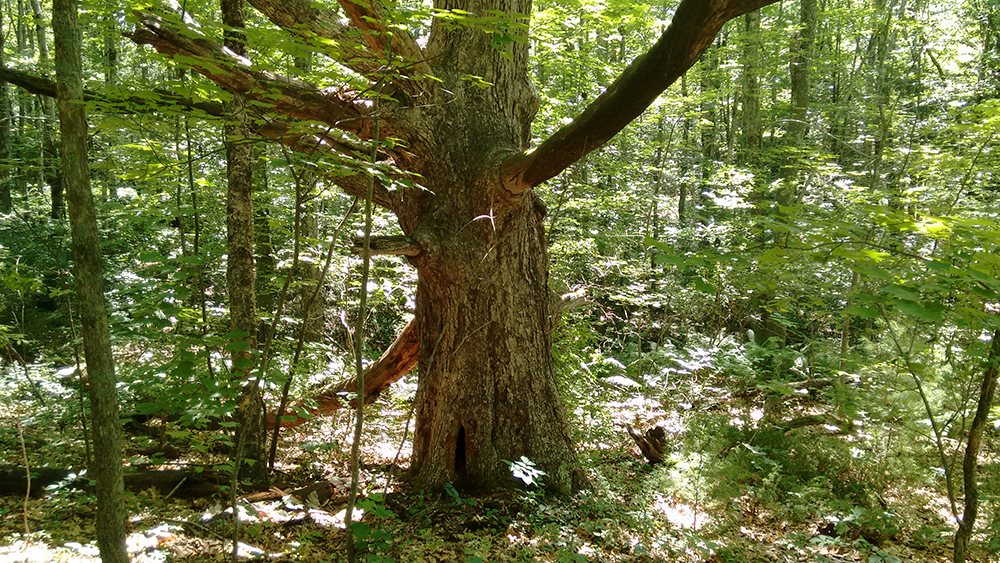 One of many enormous white oaks in this forest. Photo by Carson Hauck 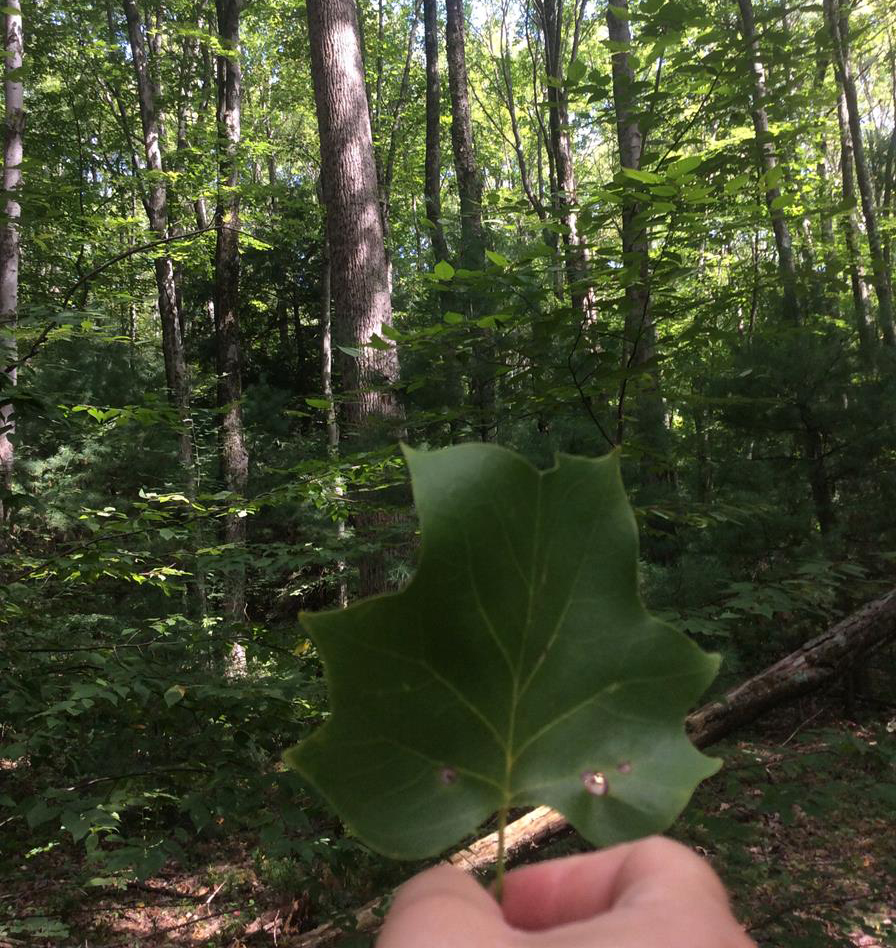 As I walked the trail, something moved in the leaf litter just a few inches from my footfall, causing me to start and stumble to avoid whatever it was. I looked down and laughed in surprise and delight! For a second year in a row, I had just about tripped on an Eastern Box Turtle. Based on its shell patterns, I do not think it was the same individual. This one did not pull its head back in to its shell nor try to make an escape, but humored me while I crouched down to take a few photographs. Can you identify its sex? 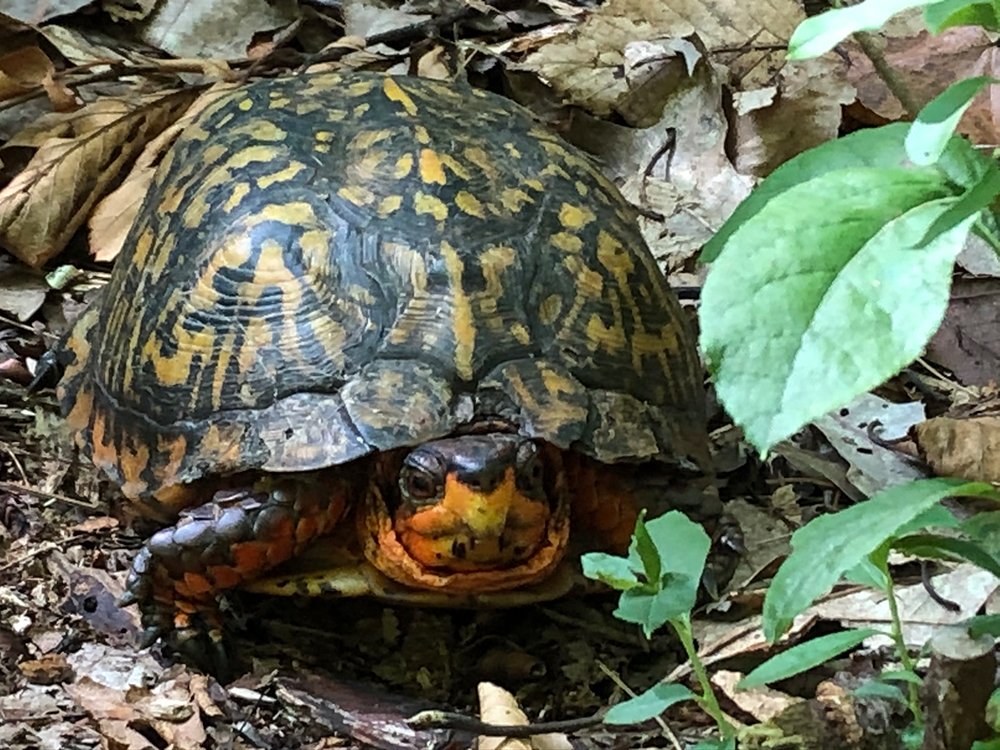 Since their shell provides protection from most predators, human activity is the biggest threat to woodland turtles. Turtles are often killed by vehicles when moving overland to seek upland nest sites, and during field mowing or timber harvests. Development that destroys and fragments their habitat may be the greatest threat. Another threat is collecting and keeping turtles as pets, which, as it should be, is illegal in many states. These unique turtles are protected by law in Massachusetts and other New England states, and so care must be taken around known populations to avoid damaging their habitat and the turtles themselves when harvesting timber or mowing fields, and to consult with the NHESP when development or intensive land management is proposed in any designated Priority Habitat.

The Massachusetts NHESP issues useful mowing guidelines for landowners and land managers working in turtle habitat. Box turtles hibernate from November until about April, several inches beneath leaf litter and soil or woody debris. Therefore, on NEFF-owned properties where woodland turtle habitat has been identified, we take care to follow the guidance of the state’s forestry conservation management practices by only harvesting between November 1 and March 15 in frozen soil conditions, and by not scarifying the soil with motorized equipment; we last conducted a turtle-sensitive harvest of this style in 2018 on a central Massachusetts property. NEFF strives to keep its forest stands well stocked with large-diameter trees in general as part of our Exemplary Forestry standards as a best practice when harvesting, and one that just happens to also benefit these turtles, which favor well-stocked forest patches for overwintering.

NEFF is proud to conserve unique habitat for turtles and other species by protecting and responsibly managing our own lands with wildlife in mind, and by protecting private properties like the one mentioned in this post through conservation easements!

Notes From the Field: Wildlife Signs and More While on Walkabout | August 6, 2020

Notes From the Field: Thinking Through Conservation’s Untold Origins While Driving to Conservation Sites | August 27, 2020

Notes From the Field: Thinking Through Conservation’s Untold Origins While Driving to Conservation Sites 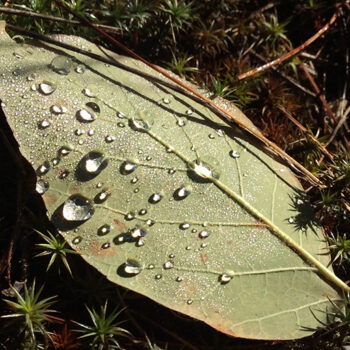 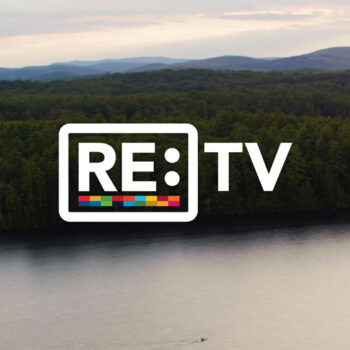