Notes From the Field: Winter Woodpeckers

Notes From the Field: Winter Woodpeckers

As autumn phases toward winter and the daylight dwindles, the woodlands of New England become noticeably quieter. Tropical migrant birds like colorful wood warblers, flycatchers, and thrushes have fledged their young and mostly departed by now to warmer latitudes. The forests are left to their intrepid year-round resident bird species, which include Black-capped Chickadees, Brown Creepers, Golden-crowned Kinglets, Nuthatches, and Blue Jays, among others. Among the more noticeable and gregarious of the year-round resident birds are several woodpecker species. We are all familiar with their variety of drumming rhythms echoing through the woods as they mine trees for insects.

Four common and colorful woodpeckers inhabit our forests through the year, including the Downy, Hairy, Pileated, and Red-bellied. An additional far northern New England resident of Acadian forests, particularly recently burned areas, is the Black-backed Woodpecker. Northern Flickers and Yellow-bellied Sapsuckers are common breeding species in the region, but only wayward ones remain through the winter, mostly in southern New England.

The most common resident woodpeckers are Downy and Hairy Woodpeckers (a female Downy Woodpecker is pictured at the top of this blog post). Found in just about any type of woodland, but favoring bottomlands and edges, these small birds are similar in appearance. They are not particularly shy and often call out with distinctive and diagnostic chatters (the Downy in line with its name has a descending chatter; Hairy has a flat chatter) and “pik” notes (harder to differentiate, but it comes with experience). They hop and flitter around mid-height dead branches and tree trunks, busily hammering and probing for insects. Both species’ males have a small red cap on their head. A major difference to help with identification is bill length; very short for the Downy while the Hairy’s is notably longer, nearly half the length of their head. 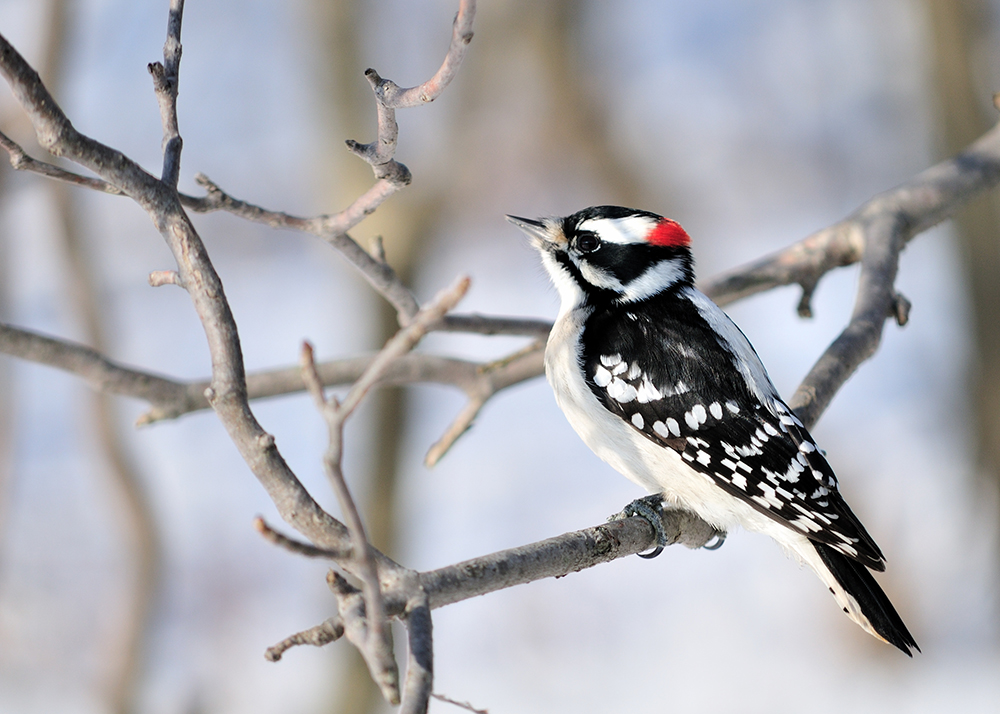 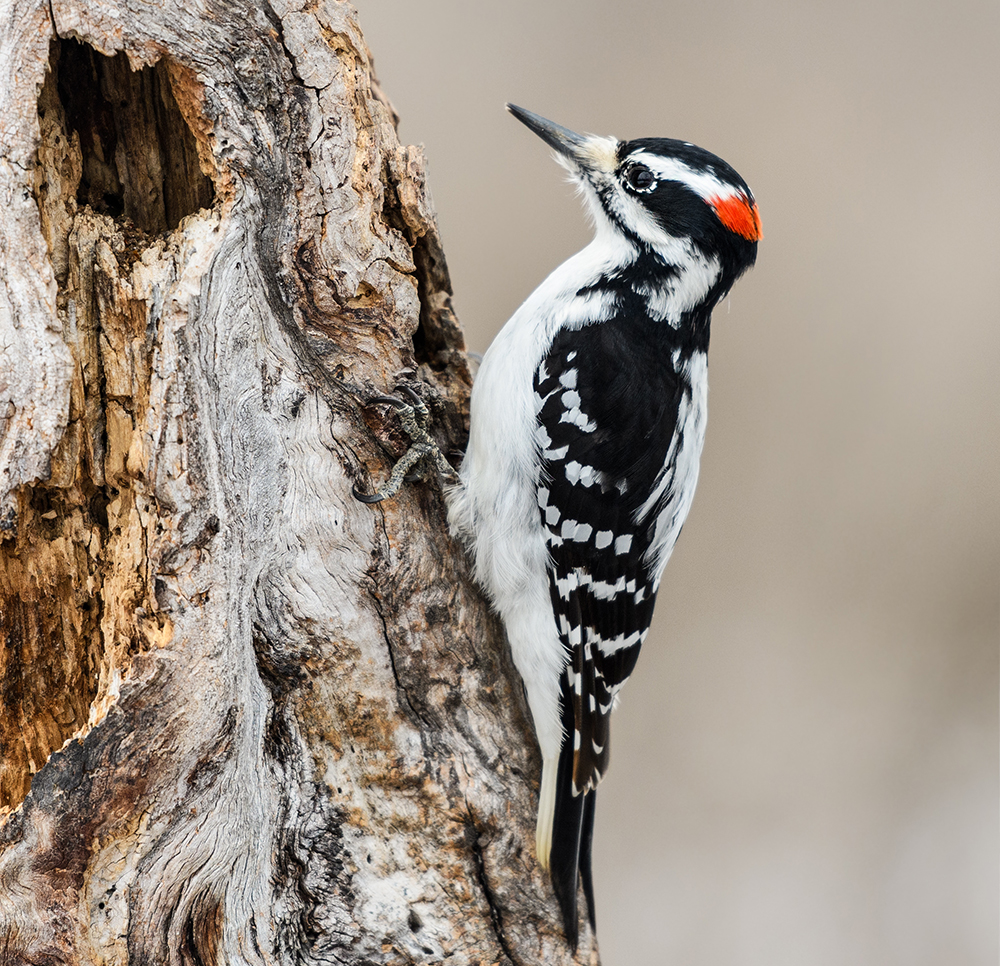 Perhaps the most dramatic, both large and loud, is the Pileated Woodpecker. Mostly black except for some solid white striping and underwing lining, it’s the size of a crow and has a dramatic red crest on its head. The Pileated gives a loud “cuk” call repeated rapidly about ten to fifteen times. The Pileated chisels out easily identifiable holes in trees that are large and squarish or rectangular, as they hammer in to trees in search of their favorite food, carpenter ants. They are not picky and will also eat other insects, beetles, seeds and fruit, or stop by a backyard feeder for a suet mix. 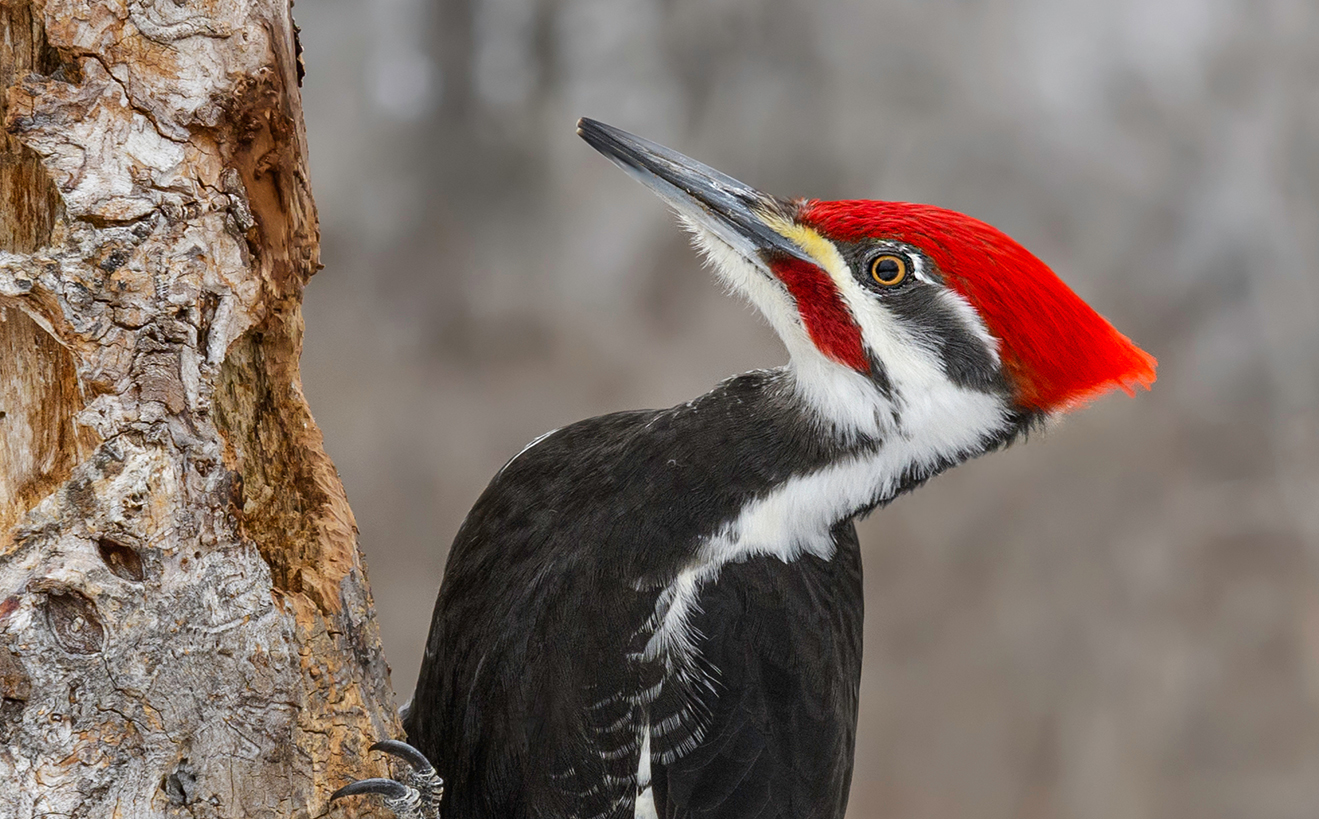 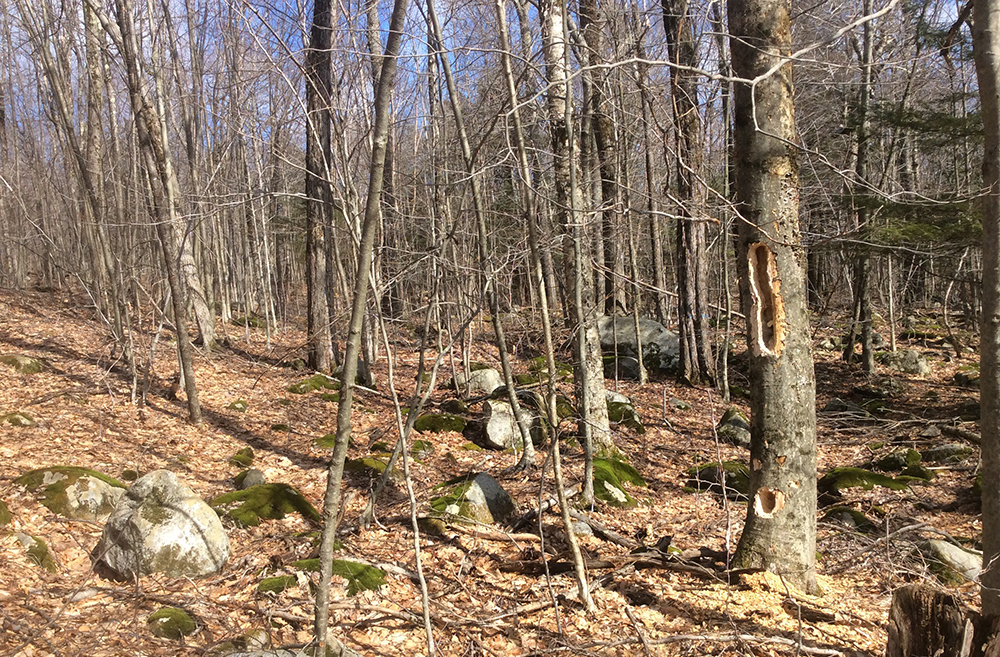 There is no mistaking the often huge cavities burrowed by Pileated Woodpeckers! Photo by Andrew Bentley

Another common and medium sized species, the Red-bellied Woodpecker, belies its name since its red crown and nape are in fact their most prominent feature while their tannish red belly is paler and often obscured. A separate species, the Red-headed Woodpecker is quite uncommon in New England and has a completely bright red head. The Red-bellied’s most common call is a harsh “kwirr!” and it can be found feeding on insects, fruit, berries, seeds, and at feeders. The species is notable because it was not present in our region until the 1960s. It has hugely expanded its range northward since the 1970s, now breeding throughout New England and resident year-round in much of our region. In fact, Mass Audubon’s 2011 “State of the Birds” report notes a nearly 16,000 percent increase (you read that right) in blocks occupied by Red-bellied Woodpeckers in Massachusetts compared to thirty years prior. This is by far the largest increase of any species over that time period! 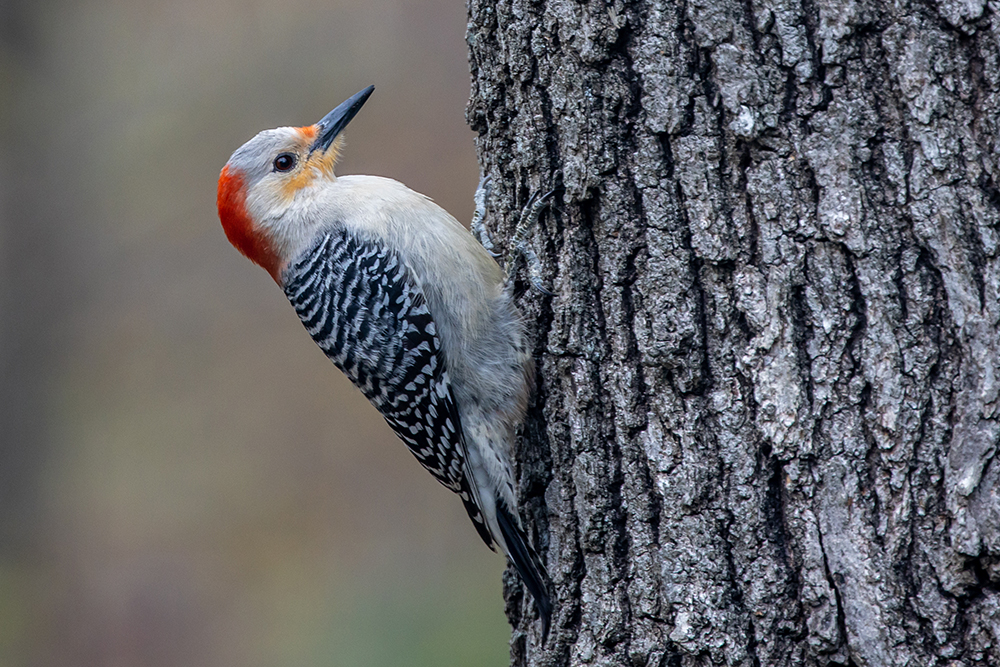 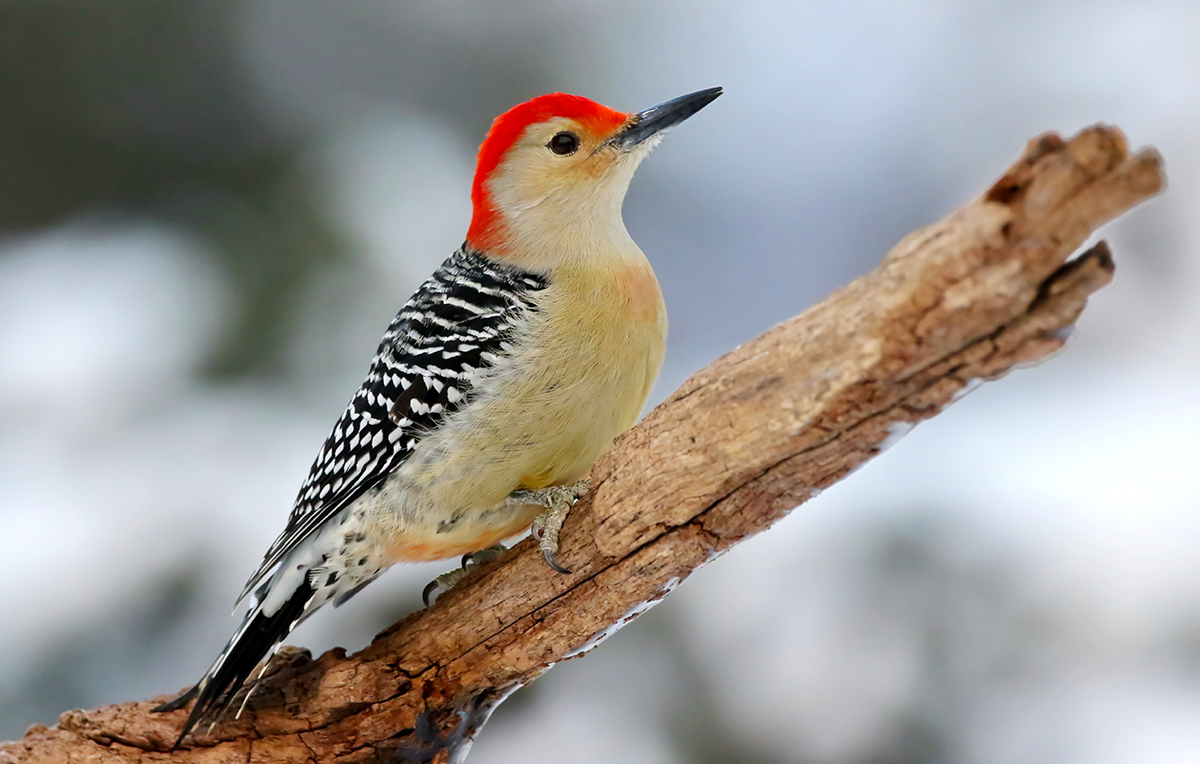 The Red-bellied’s northward colonization may reflect a pattern in part due to climate change. This species, and other such as Tufted Titmouse, Carolina Wren, and Northern Cardinal, have also shifted their year-round ranges northward in recent decades. 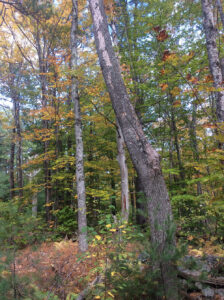 Woodpecker blonding and epicormic branching (from the lower trunk) have me worried for this ash tree, but the woodpeckers are dining well. Photo by Andrew Bentley

As part of good habitat management when coordinating a timber harvest, foresters typically leave some living cavity trees, and dead standing trees (or “snags”). Snags are infested with insects as they begin to decay, providing food for woodpeckers. They also provide opportune nesting sites for woodpeckers looking to excavate a nesting cavity. Woodpeckers provide a good example of why it’s important to leave both snags and living cavity trees, as the Downy, Pileated, and Red-bellied Woodpeckers excavate their nest holes in dead wood, while the Hairy Woodpecker prefers a nest hole in living trees.

Woodpecker populations are generally in no danger regionally. Fortunately for them, but not necessarily for the forest, they thrive when trees die and decay. Woodpecker populations have been observed to increase in areas with numerous snags from oak die-off after a gypsy moth infestation, while the Black-backed spike in northern New England during spruce budworm infestations. They thrive when there are new invasive forest pests to feed upon, and can even help us identify when they are present. A good example of this is the dreaded emerald ash border. One diagnostic sign of a borer beetle infestation is known as “woodpecker blonding,” where woodpeckers feeding upon the beetle remove the outer bark layer in large patches while feeding. If you observe this on an ash tree, look closer for the diagnostic D-shaped exit holes of the emerald ash borer—other borer beetles will have exit holes of different shapes.

We hope that you will get outside to look for our colorful resident woodpeckers this autumn and winter! When spring comes again, be on the lookout for the return of Yellow-bellied Sapsuckers and Northern Flickers. Uniquely, the flicker very often feeds on the ground and we caught them in action last spring on a wildlife camera!

Notes From the Field: Wildlife Signs and More While on Walkabout | August 6, 2020

Notes From the Field: Thinking Through Conservation’s Untold Origins While Driving to Conservation Sites | August 27, 2020

Notes From the Field: Digital Field Tools for Work and Home | October 10, 2020 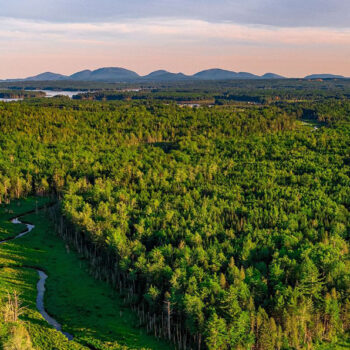 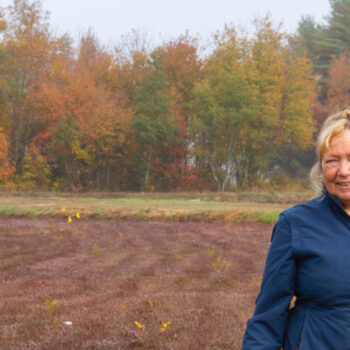