When the New England Forestry Foundation’s Downeast Woods and Wildlife project came to a successful conclusion this December, it shifted the geography of our conservation legacy: Downeast Maine, with its fog-wreathed coastlines and deep green-and-grey forests, is currently home to most of this century’s large-scale NEFF conservation work.

NEFF ultimately reached three times the original conservation goal for the project, which means 2020 has added more acreage to NEFF’s network of Community Forests than any previous year. This would be an impressive accomplishment at any time, but to pull it off during this tumultuous, stressful and grief-ridden year? That’s a staggering accomplishment made possible only by the unswerving support of NEFF’s donors and partners, and by the talent and hard work of NEFF’s staff and Board of Directors. Our thanks. 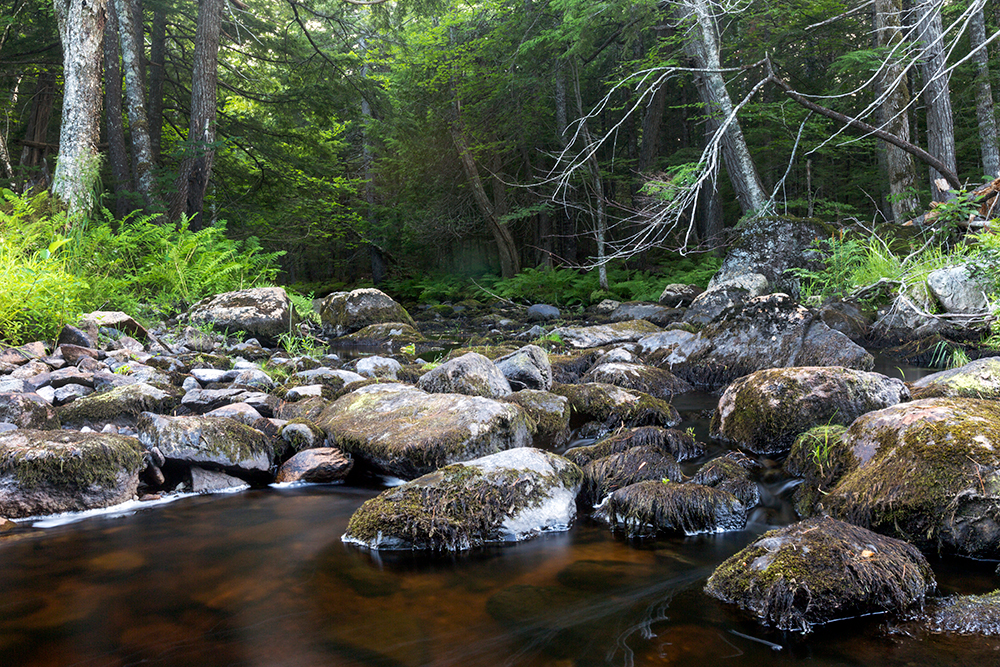 The initial aim of NEFF’s Downeast Woods and Wildlife project was to purchase and protect forestlands along the winding and sun-dappled Dennys River, whose waters—kept cool and clean by riverside forests—provide critical habitat to Maine’s endangered Atlantic Salmon population and other cold-water fish.

The project had its first major success in summer 2018 when NEFF purchased the 1,160-acre Reynolds Family Forest, and NEFF went on to take ownership of a second Dennys-adjacent property—the 2,200-acre Venture Brook Community Forest—in December 2020.

This alone would have been enough to call the project a success, but in October 2020, NEFF received two donated Downeast Maine properties totaling 5,700 acres that also stand to benefit wild animals, just ones with feathers rather than fins. This truly transformative gift will soon allow NEFF to model Exemplary Forestry at scale on more than 9,000 Downeast Maine acres.

“This donation stands as the largest land gift in NEFF’s history and creates our second and third largest Community Forests in one fell swoop,” said NEFF Chief Conservation Officer Will Brune. “These lands will be a treasure, not just for NEFF but for New Englanders.” 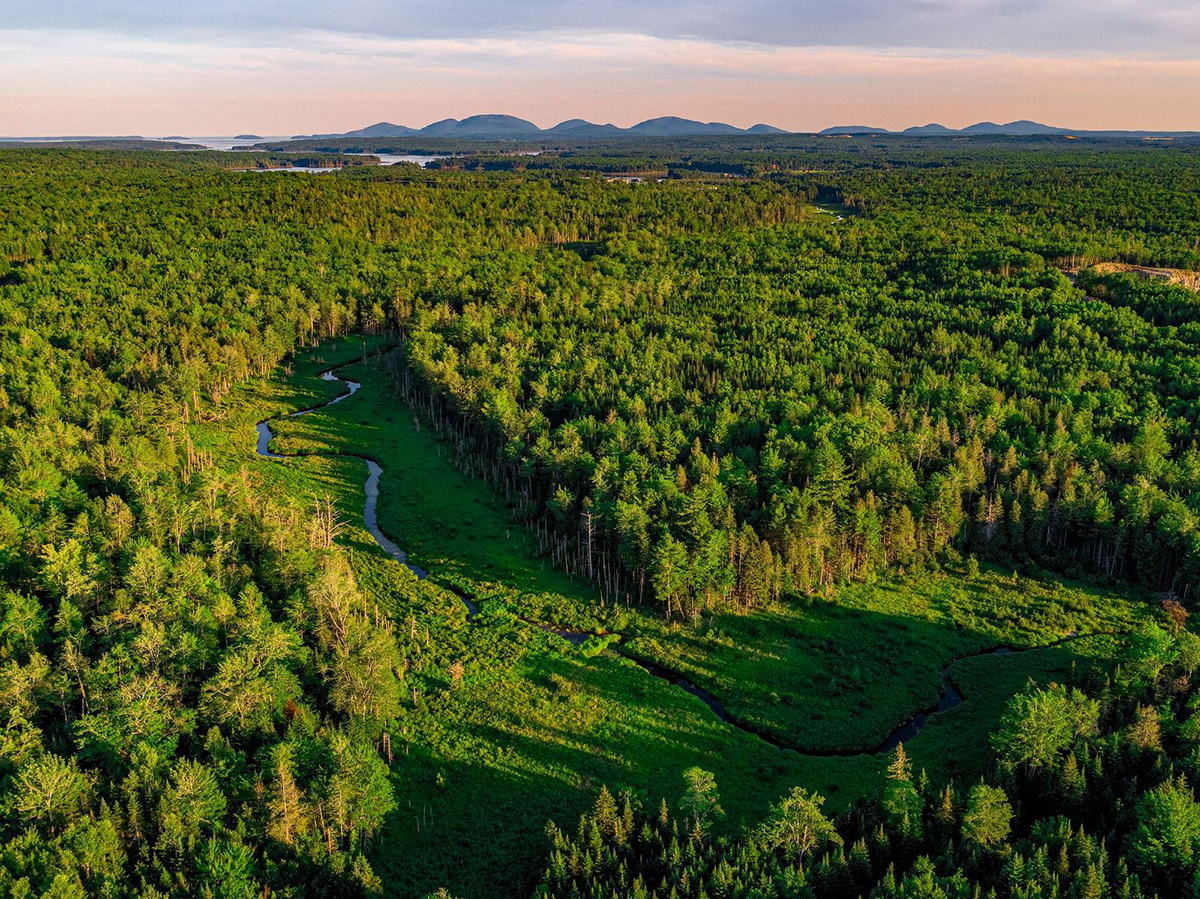 The story of these two donated properties begins in 2003 when the Maine Wind Energy Act first passed (it has since been updated). The law was strongly influenced by NEFF’s Maine Representative and Senior Advisor, Alec Giffen, then the State Forester of Maine and chair of the Governor’s task force on wind power siting. Under the law, wind energy developers often are required to mitigate the ecological and scenic impact of their installations.

In keeping with the Maine Wind Energy Act, Weaver Wind LLC set out in 2019 to mitigate their Maine-based wind project by purchasing two Downeast parcels of songbird habitat: a 2,690-acre parcel along Holmes Bay in Washington County, and a 3,100-acre parcel near Egypt Bay in Hancock County.

Two teams of habitat and biodiversity experts crafted Songbird Habitat Management Plans for the forestlands that ended up calling for the kinds of intensive management activities required to create and improve large habitat blocks; Weaver Wind then looked for conservation organizations qualified to take over both ownership and intensive management of the parcels, and NEFF was deemed the best fit given its more than 75 years of forestry and stewardship experience on its own lands.

“NEFF is pleased to be part of this forward-looking approach to maintaining songbird populations in Downeast Maine,” said NEFF Chief Operating Officer Frank Lowenstein. “We’re also thrilled to build on Alec’s past work on wind mitigation, and NEFF Chief Conservation Officer Will Brune did his usual superb work on bringing the lands into permanent conservation.”

NEFF has named the first property Holmes Stream Community Forest, and it includes intact blocks of contiguous forestland as well as important wetland features like tidal estuarine habitat, found where Holmes Stream flows into the bay. The Holmes property abuts the State of Maine’s popular Cutler Coast Public Lands, a 12,234-acre expanse known for steep cliffs that plunge into the ocean as well as its blueberry barrens, woodlands and peatlands with 4.5 miles of headlands that overlook the Bay of Fundy.

In collaboration with the Frenchman Bay Conservancy, NEFF has made the second parcel part of the existing Frenchman Bay Community Forest, bringing this beautiful woodland to 4,530 total acres. This parcel also offers important and interesting habitat features—like waterways and wetlands extensive enough to support inland wading birds—and the overall Community Forest intersects with the 87-mile Down East Sunrise Trail.

Through management of Holmes Stream and Frenchman Bay Community Forests, NEFF’s goal is to create and support stop-over and nesting habitat for migratory songbirds within the framework of Exemplary Forestry standards, with a particular emphasis on the needs of ten priority species highlighted in the Songbird Habitat Management Plans.

This means the properties need to provide water, species-specific food and species-specific shelter for birds making mid-migration pitstops as well as birds who plan to set up shop for the summer and join Maine’s immense population of breeding birds. Once the habitat work is complete on these properties, Holmes Stream and Frenchman Bay should be full of the bright sights and cacophonous sounds of breeding birds and their babies every spring and summer.

To achieve these results across both properties, NEFF will:

“I’m excited to see what we can do with parcels of this size, as they provide unique opportunities to not only apply management practices at a different scale, but also allow for a wide range of habitat conditions on one property,” said Chris Pryor, NEFF Director of Forest Stewardship. “Usually, NEFF either broadly manages for all wildlife by simply creating diverse forest structures and protecting important features like vernal pools, or manages for a single priority species like the New England Cottontail at one or two locations.”

While wildlife habitat creation and restoration will be a major feature of NEFF’s work on these properties, like all NEFF Community Forests, both will be open to the public and allow traditional recreational activities.

The Frenchman Bay Conservancy (FBC) has played a key role in working with nearby communities to identify how the Frenchman Bay Community Forest addresses local recreational needs. FBC and NEFF are drafting an inclusive, forest-wide stewardship plan that will provide a full array of recreational uses, wildlife habitat protection, and support for the Sunrise Trail. 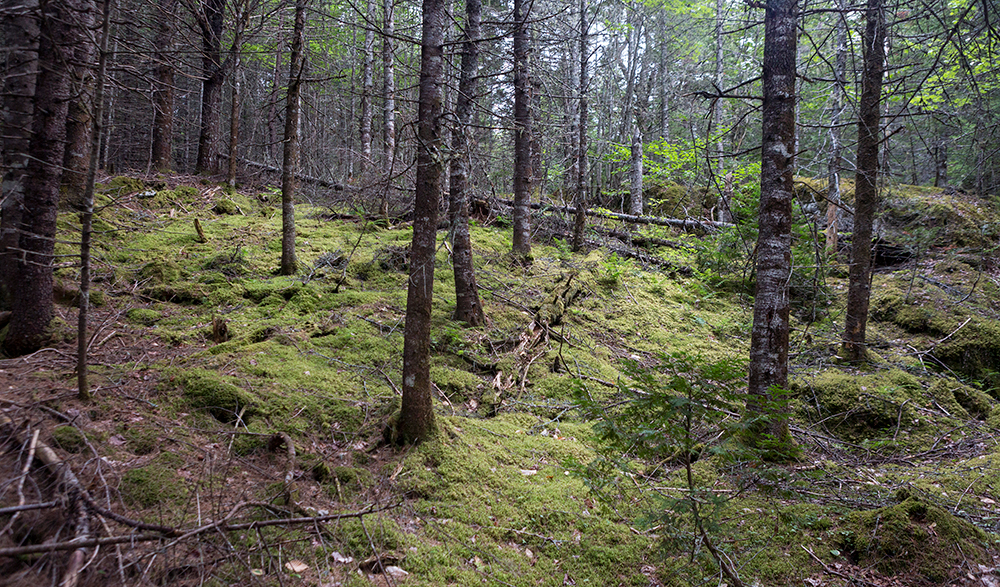 While on their way to an early morning walkthrough of Venture Brook Community Forest in 2018, NEFF staff members spotted an adult Bald Eagle perched high on a riverside snag as well as a juvenile River Otter frolicking in a roadside pond. Both of these large fish-eating predators were just a few miles away from Venture Brook’s property line, which seemed auspicious, as both were also indicators that efforts to restore and protect the area’s aquatic habitat were succeeding. You can’t have large fish-eating predators without reliable populations of fish. 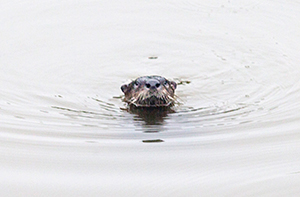 Venture Brook demonstrates in miniature the features that make Downeast Maine’s interlaced network of forests and waterways ideal for cold-water fish. Streams and wetlands weave through Venture Brook’s almost entirely forested 2,200 acres, and the forestland purifies and filters this water as it makes its way into the nearby Dennys River; trees in the riparian zone then shade the Dennys, and the end result is the kind of cool, clean river young Atlantic Salmon need to thrive.

The Dennys River is one of the wild Atlantic Salmon’s last footholds in the United States, where it has otherwise nearly vanished. While Atlantic Salmon are common in restaurants and grocery stores, those fish are almost entirely farm-raised. Wild Atlantic Salmon—which were critical to the Wabanaki way of life and once played a role in the ecosystems of almost all of the nation’s northeast coastal rivers—are now found only in Maine, in at least eight rivers.

NEFF’s conservation efforts are helping to bolster one of those rivers on a systemic scale. With the addition of the acres protected by Venture Brook Community Forest and Reynolds Family Forest, fully 20 percent of the 84,000-acre Dennys River watershed has been conserved by a variety of partners, with NEFF responsible for more than 6,400 acres. NEFF protected half of its acres via easement in 2005, and the Downeast Woods and Wildlife project’s Dennys parcels account for the rest.

This joint protection of the Dennys watershed isn’t Venture Brook’s only tie to collaborative conservation, as NEFF has acquired the parcel itself through a Maine Coastal Forest Partnership effort to protect a suite of working forests across the Downeast region. In May 2018, The Conservation Fund purchased 17,000 acres split over three properties to provide partnership members with conservation opportunities and time to fundraise. NEFF, Blue Hill Heritage Trust and The Nature Conservancy—who are joined in the partnership by The Conservation Fund, Maine Coast Heritage Trust and Downeast Salmon Federation—each committed to raising the funds for and purchasing one of the properties. The Conservation Fund transferred ownership of Venture Brook to NEFF this December. 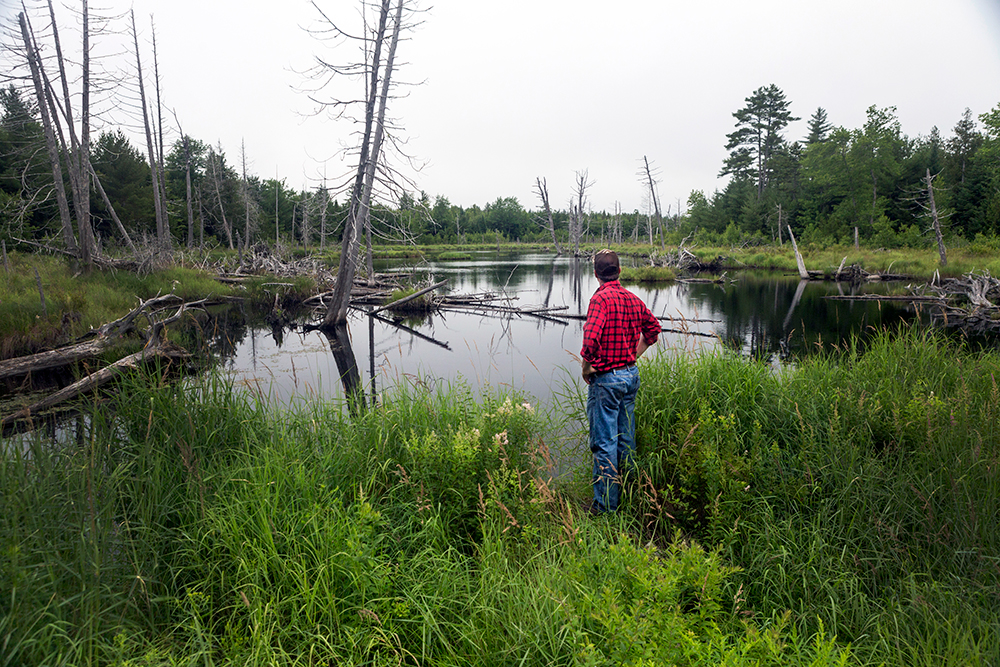 Together, piece-by-piece, we are stitching together a whole and healthy landscape that will benefit people and the natural world for generations to come. 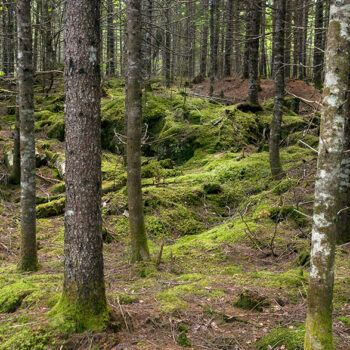 Learning to Weed Out “Invader” Plants 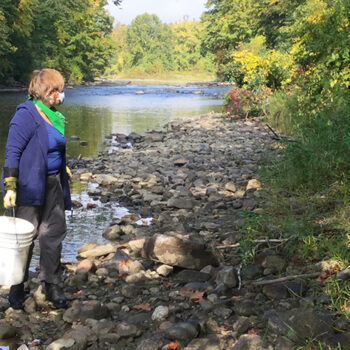