By protecting New England bats’ summertime forest habitat and managing it to meet their needs, we can help these little mammals withstand their greatest threat: White Nose Syndrome.

These days, a growing number of people seem to understand bats are mammals, but did you know they are the only kind of flying mammal in New England? I also think they’re pretty cute, but that’s not always a widely held opinion.

Bats have long been misunderstood, and are often portrayed in popular media as frightening animals who keep company with witches and vampires, or even as predatory disease carriers.* In truth, bats are incredible animals with a fascinating life history, and they play an important ecosystem role that does us all a favor: A single bat can eat the equivalent of 1,500 mosquitoes in just one evening, and they eat black flies too!

*While bats can carry zoonotic diseases, these diseases spread to humans when people—like wildlife traffickers, researchers, tourists, or curious locals—come into close contact with wild bats and do not follow appropriate safety protocols or wear appropriate protective equipment. Don’t blame the bats!

There are nine species of bats found in New England, and they fall into two general groups. Both groups spend the summer feeding, roosting, and raising their pups in the forest. One group then migrates south for the winter and the other spends winter hibernating in “hibernaculum” or “hibernacula” (plural): places like caves, mine shafts, and occasionally even attics or barns. 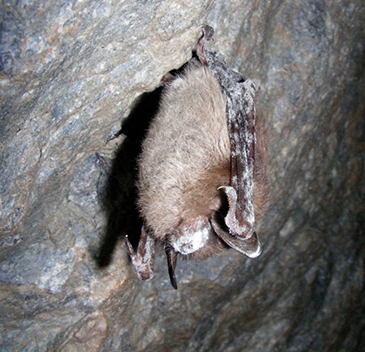 Bats in the eastern U.S., particularly those that hibernate, have experienced devastating population declines since approximately 2005, when a fungus from Europe was introduced to a cave in upstate New York. The fungus, Pseudogymnoascus destructans, causes the disease White Nose Syndrome (WNS), so named for the white, fuzzy looking growth that appears on the face and sometimes other bare skin of infected bats. Incredibly, WNS killed more than 95 percent of hibernating bats in some hibernacula within a few years of infestation. All species’ populations have remained low since then, and some recent years’ data suggest Little Brown and Big Brown Bat populations might be rebounding slightly.

Our responsibility at NEFF and as individuals who love the working forest landscape is to use forestry strategies that achieve both productivity goals and improve and expand bat habitat where possible.

We can’t do much to protect overwintering bats, other than supporting efforts to limit disturbance to hibernacula. However, we can make a big difference when bats return to woodlands. High-quality forest habitat for bats will promote strong, well-fed individual bats—bats with the best chance of withstanding WNS to reproduce and function as part of their ecosystem. Scientists, natural resource managers, and even state and federal regulations all recognize the importance of summer forest habitat to bats’ survival.

As the weather warms, New England bats turn to forests for shelter and food.

The females of each species give birth to 1-2 pups per year, generally in June, and the pups are flightless when born. Multiple females and their offspring will congregate in a maternity colony in a particular roost tree until the pups have matured. Some bats return to a particular maternity tree for multiple years while keeping “back-up” secondary roosts nearby. 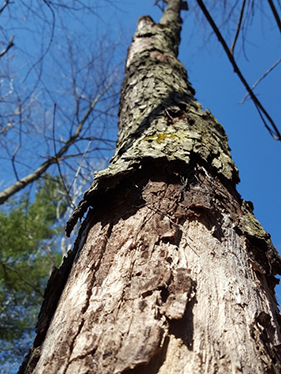 When choosing a roosting tree, bats tend to favor exfoliating or sloughing bark on both live trees and standing dead trees (called “snags”); bats also look for crevices and cavities in the trunk or primary branches.

Each evening, bats leave their roosts to eat up to 50 percent of their body weight—or more, if they are lactating females—in insects like moths, flies, beetles, and mosquitoes. In our landscape, one of bats’ best bets for an insect-heavy foraging spot is a structurally complex forest with ample understory strata where insects can fly without strong winds and move around on abundant tree leaves and twigs. In addition, bats forage along forest edge habitats, utilizing stream riparian corridors, ponds, hedgerows and even forest roads as flyways.

Now that we understand why forests are crucial to bats, let’s consider how forest landowners, managers, and stakeholders in New England forestland management can help.

Through assessment and analysis, as well as close work with partners, NEFF is demonstrating how Exemplary Forestry that improves bat habitat also improves habitat for a wide range of other native flora and fauna. Amongst the dynamic and evolving process that is working forest stewardship, NEFF is at the forefront of creating landscape-scale improvements for Exemplary Forestry’s co-equal goals, and we look forward to creating better bat habitat as the new standards go into effect.

There has never been a more opportune moment to give our attention, time, and resources to bats, in recognition of the incredible role they play in New England ecosystems, in response to their severe population declines, and in celebration of bats’ rich life history. 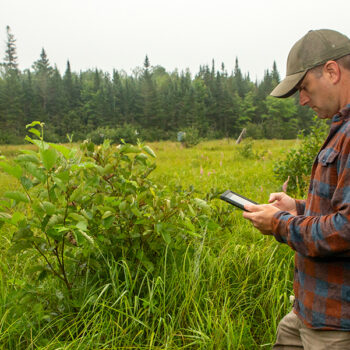