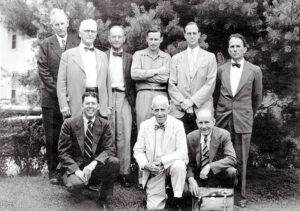 NEFF spent much of 2019 celebrating its 75th anniversary, and on this page, you can explore a number of the historic materials we shared throughout that momentous year and read stories about NEFF’s history.

As NEFF approached its 10th anniversary, its Committee on Finance distributed a progress report in the form of an open letter to the wider NEFF community. Its charmingly forthright opening paragraph is included below, and the entire letter is available here as a PDF.

“In 1943 the Massachusetts Forest and Park Association appointed a committee of woodland owners, representatives of leading forest industries and foresters to study the problems of small woodland owners. The New England Forestry Foundation is the result of that study. Started in 1944 with no money, no experience and as just an idea, it has developed in nine years into an organization with fourteen foresters in ten Management Centers, and has done work on 321,000 acres for over 1,000 owners, and has supervised the cutting of nearly 60,000,000 board feet of timber. There still remain on the lands of these clients 400,000,000 feet, worth over $7,000,000 at the average price of $17.65 obtained last year.”

How cooperative efforts to protect contiguous forestlands have shaped two cornerstone NEFF properties over the years Writing and photography by Tinsley Hunsdorfer When New England Forestry Foundation (NEFF) was founded in 1944, the practice of private organizations protecting land through ownership was largely untried in the United States. As we wrap up NEFF’s 75th anniversary […]

James Donovan, owner of a wooden boat building yard in Chatham, Massachusetts, contacted New England Forestry Foundation (NEFF) in August 2018 looking for opportunities to purchase and conserve recently harvested Maine timberland. NEFF staff steered him toward a variety of tracts, including an opportunity in Hiram. Mr. Donovan went on to purchase 353 acres in […]

New England Forestry Foundation is pleased to announce the protection of Reynolds Family Forest, the first of two properties featured in our ongoing Downeast Woods and Wildlife project. Writing by Tinsley Hunsdorfer, NEFF Communications Manager Photography by Lauren Owens Lambert Summer 2018: An Early Look at a Remarkable Forest In the pre-dawn light of a […]

As NEFF’s conservation reach has grown over time through the acquisition of more Community Forests, so too has our ability to practice and demonstrate Exemplary Forestry on a variety of lands. As part of our 75th anniversary celebrations, we asked designers at Yellobee Studio to create a graphic that would show this progress. We’re thrilled […]

Explore the highlights from 75 years of conservation and Exemplary Forestry, and then see what’s next for NEFF. 1860-1940: A Period of Rapid Change for Forests and Conservation At the time of European settlement, forests covered 90 percent or more of New England. By the mid 1880s, however, vast stretches of this landscape-defining feature had […]

The history and highlights of NEFF’s first Vermont forest Writing and photography by Tinsley Hunsdorfer Tucked high in the hills of central Vermont, Hawk’s Hill Demonstration Forest is cut through with cold, clear brooks that feed the property’s ponds and wetland areas, as well as steep ridges that provide a little extra challenge to hikers. […]

Harris Reynolds, William Wharton, Milt Attridge and John Hemenway played foundational roles in NEFF’s early days Writing by Frank Lowenstein There are times when concern for the environment seems to move in leaps and bounds. After 10 percent of all Americans participated in demonstrations on the first Earth Day, a tidal wave of environmental laws […]

Learn about the environmental and political conditions that led to the creation of New England Forestry Foundation, and see what’s in store for this banner year Writing by Tinsley Hunsdorfer In the 1930s and 40s, an eclectic group of foresters and outdoor enthusiasts led by Harris Reynolds grew concerned about clear-cutting and destructive management on […]