Annual visits to conservation easements are well underway and we are enjoying the chance to walk protected forest land and occasionally converse with landowners outside and from a safe distance. A few highlights from my past couple months include abundant moose sign, careful forestry, an uncommon plant observation, and a mystery bird’s nest.

June began with a day that started at 49 degrees and never crested 60 while I climbed the steep slopes of Temple Mountain in Temple, New Hampshire, to inspect three easements totaling almost 350 acres. These are mentioned in the “Cooperative Conservation” feature story in NEFF’s winter 2019 Into the Woods newsletter. I was grateful for the cool morning. My last climb up to the Wapack Trail on this property was on a 90-degree day. A vernal pool still held water on the lower slopes as I began my trek—there were still a few weeks left in spring after all—and spotted salamander eggs were still submerged within it (hard to see, near the end of the protruding branch). 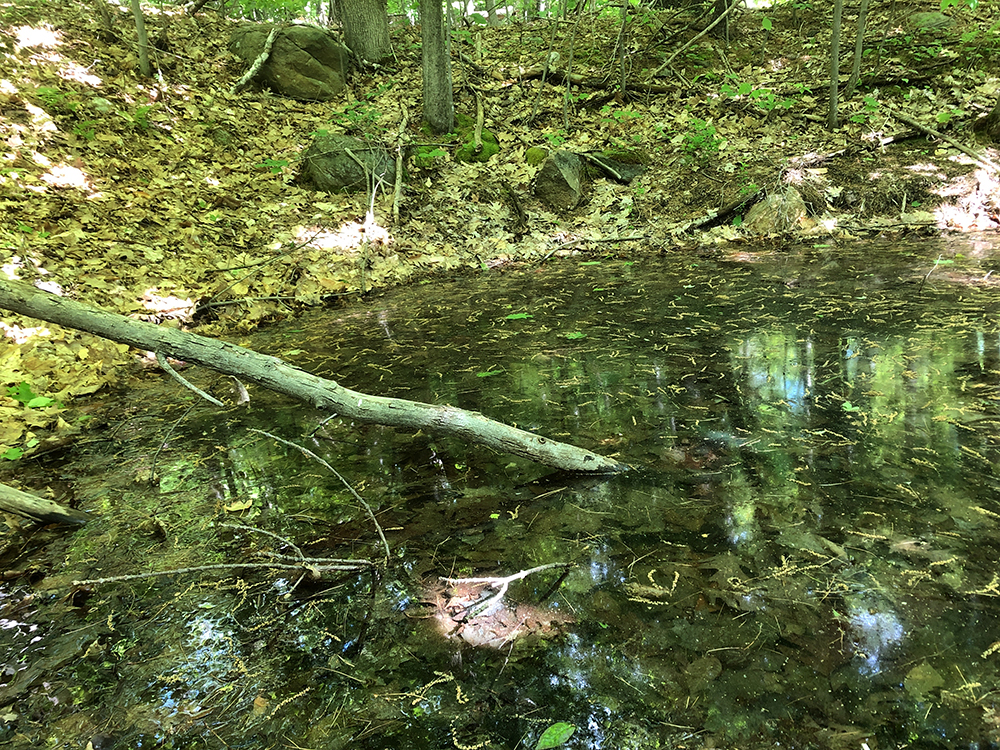 As I walked the easements, it was apparent that moose call the mountain and its surrounding forestland home! How can I tell that moose were responsible for this scrape and not deer? I am 6 foot 2 and the browse mark pictured below extended notably higher than my head. I joined the Wapack Trail and hoofed it up and over Holt Peak, then bushwhacked through the forest towards the eastern boundary. 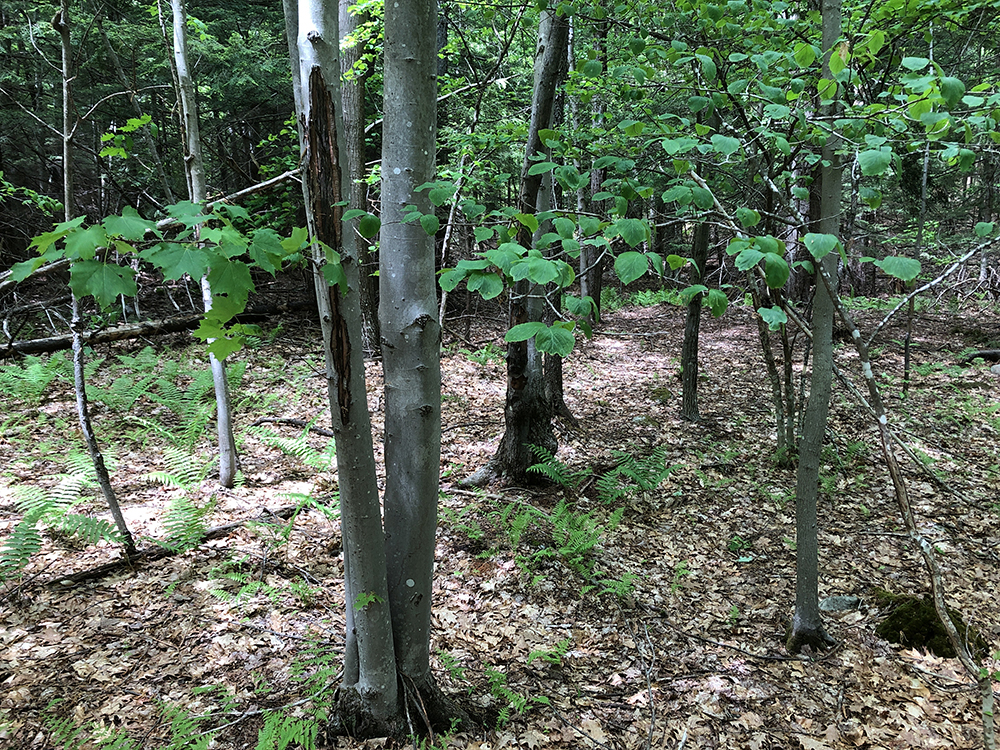 As I began my descent from the pinnacle, I discovered a neat habitat feature in a saddle that would promote great moose habitat. Most of the forest was a mix of young hardwoods and white pine, regenerating from past harvest (the moose were munching on the bark and twigs of young red, sugar, and striped maples). Perhaps other parts of the forest were simply stunted due to thin soil and just not cut since the mountain slopes were sheep pasture in past generations. A dense patch of weather-whipped red spruce trees with ferns and sphagnum moss ground cover stood out! A Nashville Warbler’s song trilled out as I approached. This red spruce swamp was not described in the forest management plan, so it was quite an interesting find to report to the landowner. Moose enjoy these swampy inclusions in the forest to stay cool in the pools of standing water and browse on vegetation. 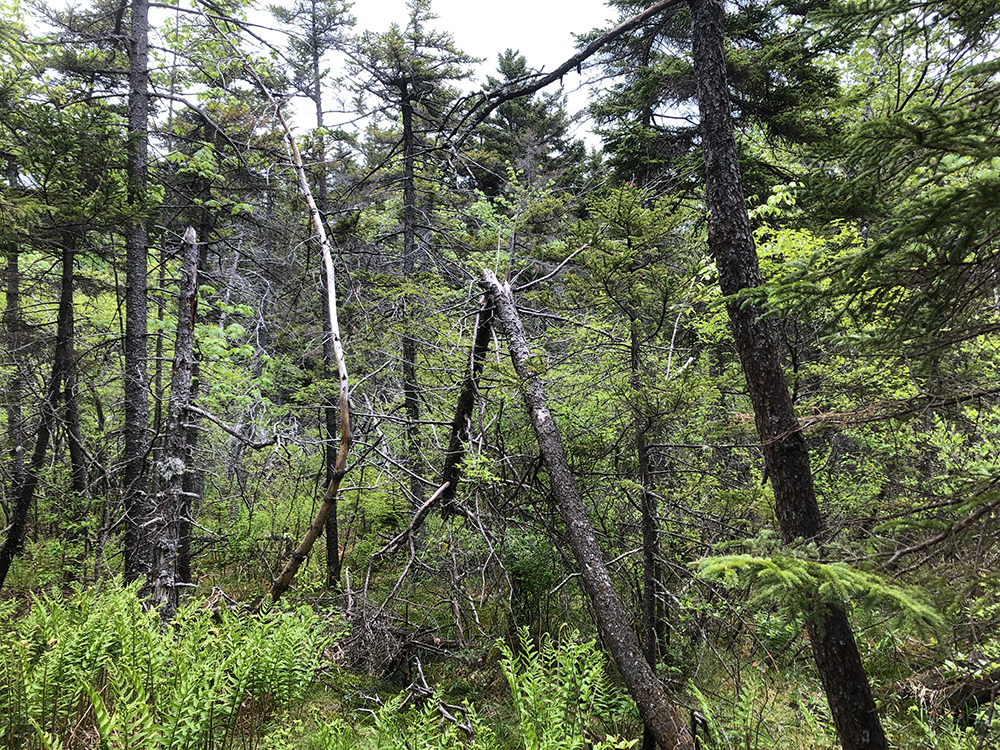 After the 800-foot ascent from the landowner’s house to the 2,045-foot Holt Peak summit, I was feeling hungry and found my way from the spruce swamp out to a ledge to enjoy my lunch. I enjoyed views of the Wapack Range and more than 50 miles east all the way to the Boston skyline. 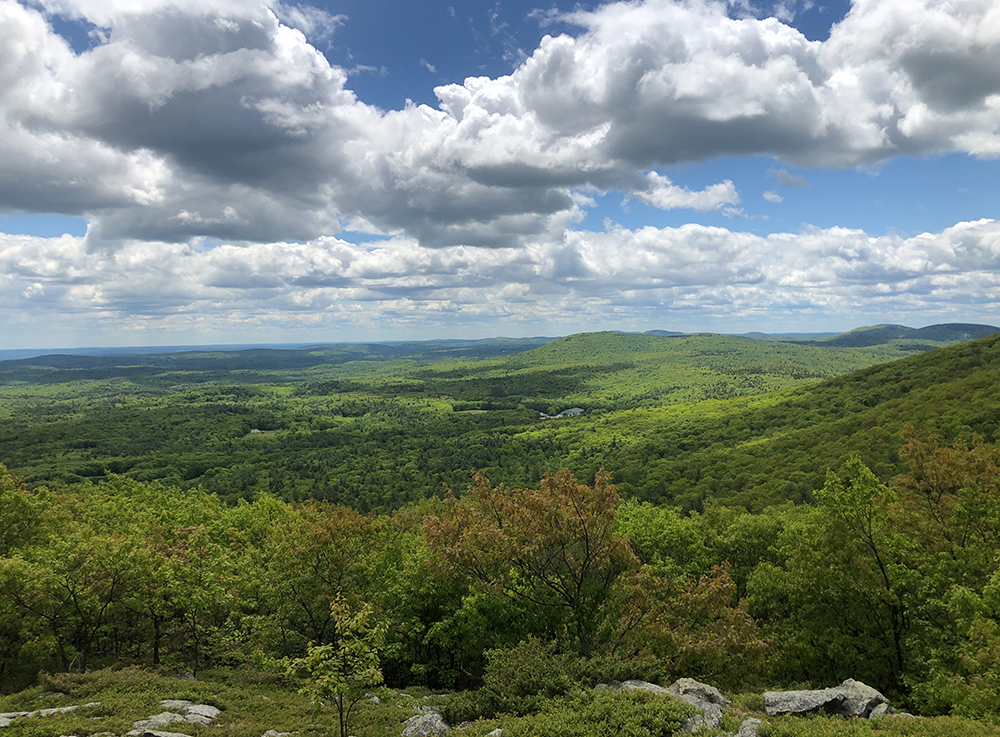 On June 12, I made my way to three easements in New Hampshire and Vermont a short ways apart across the Connecticut River. I started my day inspecting a forest stand that had been recently harvested over the winter of 2019. Harvesting in the winter on frozen ground enables loggers to minimize soil erosion and wetland impacts during their work. According to the forest management plan (FMP), the goal was to implement a single-tree and small group selection of thin hardwoods and pine, retaining sugar maple and better-formed white pine as future crop trees, as well as cavity trees for wildlife. 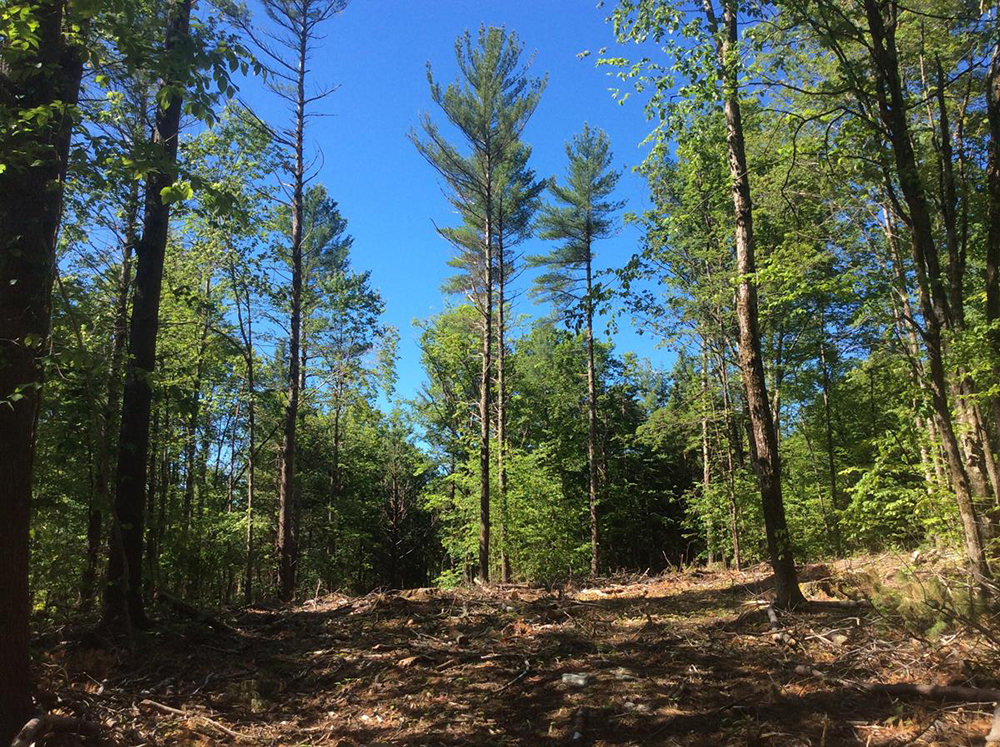 As you can see, beautiful straight white pines were retained. The skid trails showed no signs of erosion due to the care—and tolerating the winter cold!—taken by the landowner’s forester and loggers. Sunlight now reaches the forest floor and the result will be a new forest layer, diversifying the age classes in this stand. Forest birds that favor multi-aged woodlands and conifers sang while I walked, including Red-breasted Nuthatch, which will appreciate the cavity trees left standing, and Blackburnian Warblers.

After leaving the harvested stand, I was in for a surprise on its edge but I wouldn’t know it until I got home. A patch of flowers I couldn’t quite place was growing on the forest floor in an adjacent stand of northern hardwoods, dominated by sugar maple. I took photos of it to identify later. 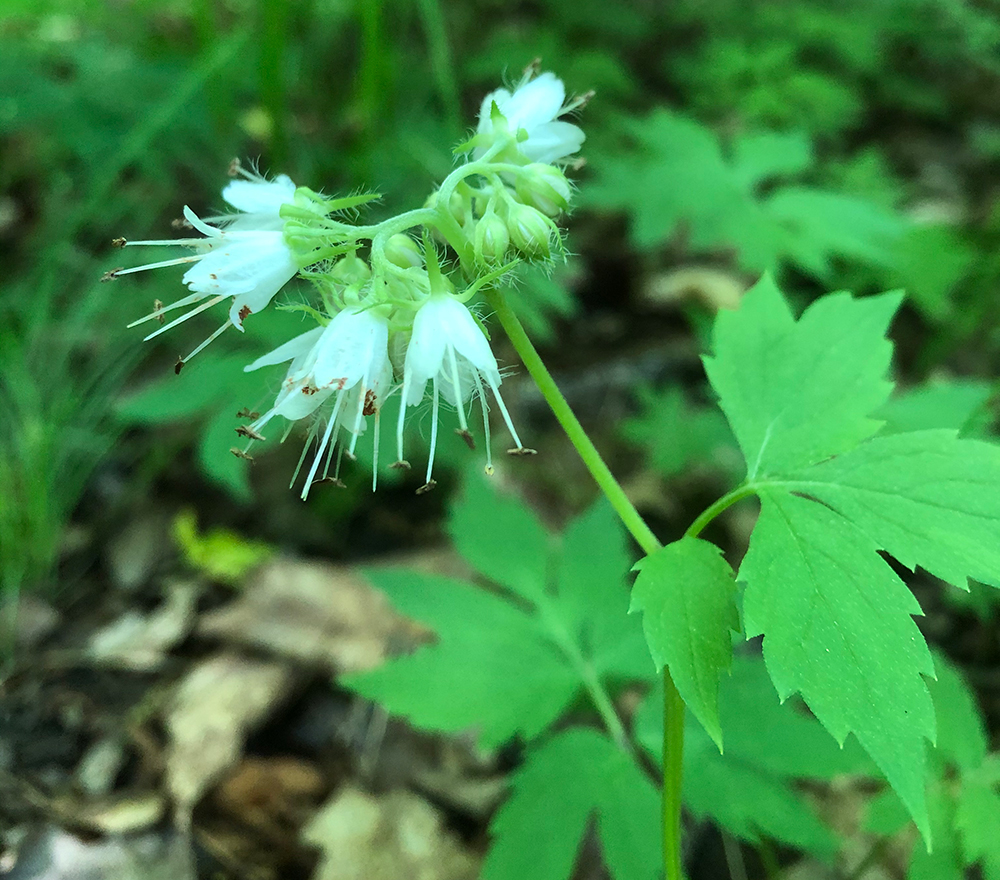 When I arrived back home, I leafed through my wildflower guides and quickly found this was Eastern waterleaf (Hydrophyllum virginianum). Turns out this plant is somewhat rare in this part of New England! You can see a unique feature of this plant in this photo. The white flower petals are dwarfed by the thin pistils and stamens—female and male reproductive parts, respectively—which stick right out of the flower.

The next two easements were pleasant visits with views of rolling hills and Mount Ascutney, though I neglected to photograph them since we had in the past. My day’s final highlight was flushing a bird from the forest floor and thankfully not stepping on its ground nest in a cup of pine needles.

Nestled within were four smooth light blue eggs. I thought of the ground-nesting bird I most often encounter, the Ovenbird, whose “teacher-teacher-teacher” calls are seemingly everywhere through New England’s forests. I had heard a couple earlier in the walk. But then I recalled flushing an Ovenbird two years ago, which then clearly scolded me as I photographed its nest and moved along. Ovenbird eggs are cream-colored and speckled with brown. 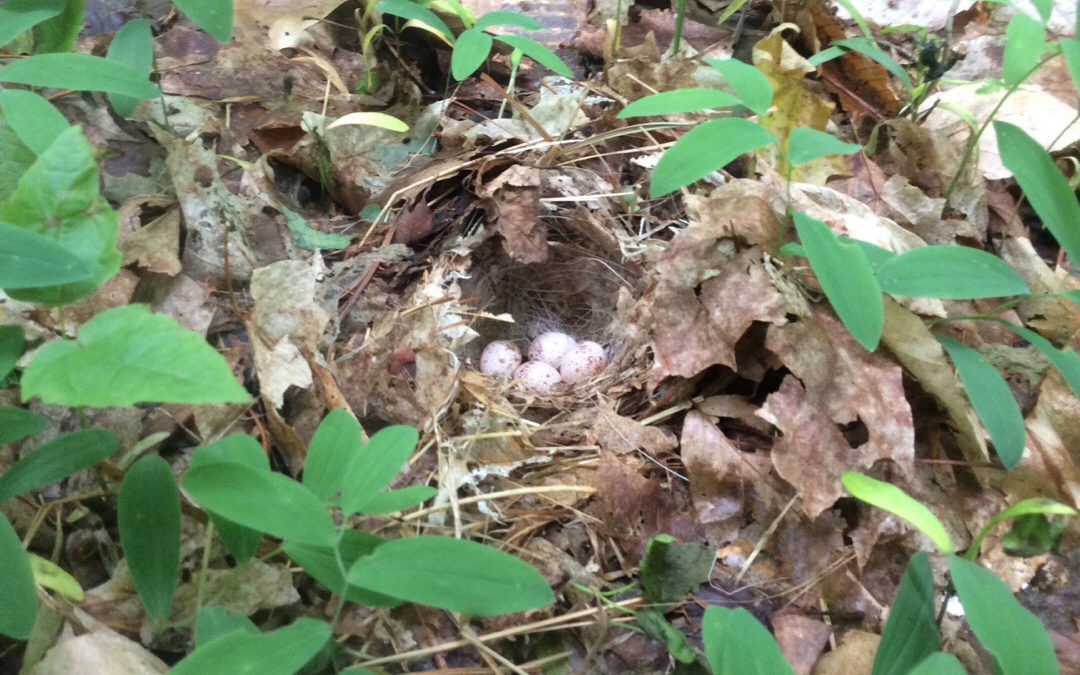 This is the Ovenbird nest photo from 2018 on a walk around another Vermont easement. So what were the blue eggs? The parent had not scolded me to enable song identification and I didn’t get a good look.

However, from the fleeting look I got it was probably a thrush. Out of the common thrushes, I could eliminate American Robin, which prefer edges and nest in trees and bushes (also I could see no red breast), and Wood Thrush, which also nest on branches above the ground. Though it also resembles a thrush in appearance, Ovenbirds are a warbler species and their eggs are not blue. I read up more and found out that Hermit Thrush and Veery frequently nest on the ground and their eggs are similar shades of blue, difficult to differentiate. The only thrush I heard that day was a Hermit Thrush, nearby but a couple hundred yards away on the property. And Veery prefer nesting and foraging near wetlands, and this was a quarter mile from the nearest swamp or stream. Hermit Thrush is my best guess!

These are just a few highlights from recent visits to conserved forest land and I look forward to sharing more throughout the summer! 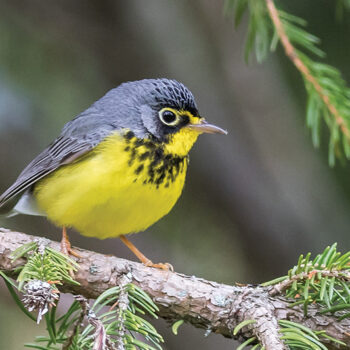 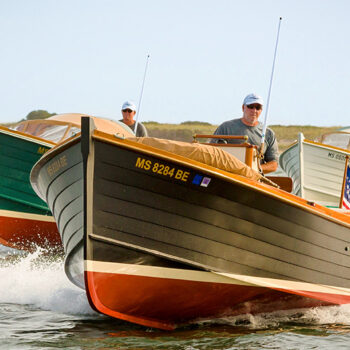